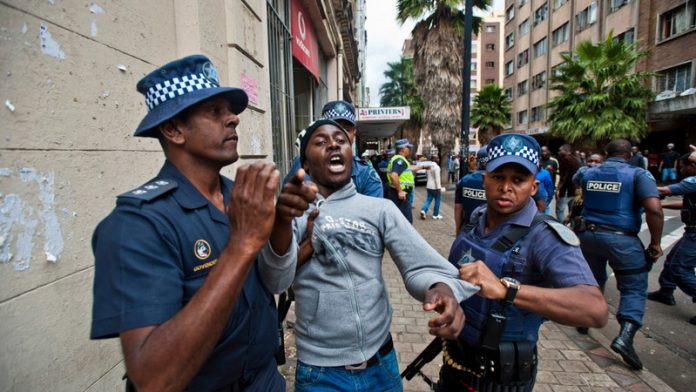 Speaking outside Alexandra Magistrate’s Court, where four young men had just appeared for his murder, Sithole’s sister Thandi said the accused should be kept behind bars for a very long time.

She became emotional when she was asked what it felt like to see her brother’s alleged killers.

“It was very difficult because they are small children, in their early 20s. But how cruel are they to take someone’s life like that,” she said.

Sithole said she had little faith that justice would be served: “The South African justice system is very poor.”

Asked what kind of sentence would be appropriate for the accused, Sithole said: “Life sentence and no bail.”

Sithole was stabbed on the streets of Alexandra on Saturday. Pictures of him being attacked and stabbed were published on the front page of the Sunday Times.

Arrests made
Three men were arrested for the killing on Sunday, while a fourth was arrested in the early hours of Tuesday. The accused – Sifiso Mzimela, Amanda Sibiya, Sizwe Mngomezulu and Mthinti Bhengu – were charged with murder and robbery.

After the proceedings, National Prosecuting Authority head Mxolisi Nxasana and Gauteng Premier David Makhura addressed the media. Nxasana said he believed the state had a strong case against the accused. He urged the Alexandra community not to take the law into their own hands, but allow justice to take its course.

There has been speculation that the attack on Sithole was linked to other xenophobic attacks around the country over the last week.

Makhura said this had not been confirmed.

“Those who were around claim this was a robbery,” said Makhura.

The youngsters had allegedly taken cigarettes from Sithole, who was a vendor, and then refused to pay him, Makhura said. He said xenophobic attacks would not be justified or tolerated.

“We would like to send a strong message that anyone involved in attacks on foreign nationals will be arrested,” he said. Makhura later addressed the community, where he called for unity.

Sithole’s xenophobic killing should be lesson for SA – Mandela
Mandla Mandela said as Africa mourns the death of Emmanuel Sithole and other victims of the recent xenophobic attacks, South Africans should learn to be more welcoming to foreigners given the history of the country’s freedom fighters being exiled in other countries during struggle days.

“South Africans should embrace all who seek refuge and asylum under international law and conventions in the expectation of safety, security and peace in our land. We should protect them with our very lives and ensure that they receive the support and protection they long for and deserve, said Mandela.

Speaking in his capacity as the Mvezo chief, the eldest grandson of late former president Nelson Mandela said nothing could bring back Sithole but there were lessons to be learnt.

“There is nothing we can do to bring back Emmanuel Sithole. We can but apologise and express our deepest condolences to his family and the Mozambican people, and contribute to ensuring such brutality does not happen again.

“His killing was not the act of ordinary peace-loving South Africans, many of whom live in Mozambique and contribute to the development of that country and the upliftment of its people,” said Mandela.

The Mvezo chief, who is also an ANC member of Parliament, called on South African leaders to work hard to put a stop to the attacks and for the law to take its course and arrest the perpetrators.

“We call on communities and community leaders across the length and breadth of South Africa to leave no stone unturned to put an end to this madness. The life of all human beings is sacred and the callous targeting of foreign nationals is a crime against us all,” he said.

He said the country needed to face its challenges of unemployment, poverty and inequality head on and not be diverted by “random acts of insanity that unfortunately hold the potential of sweeping us up in a maelstrom of mindless violence and the killing of innocents”. – News24.com, City Press.