Activists are dying as climate conferences potter on 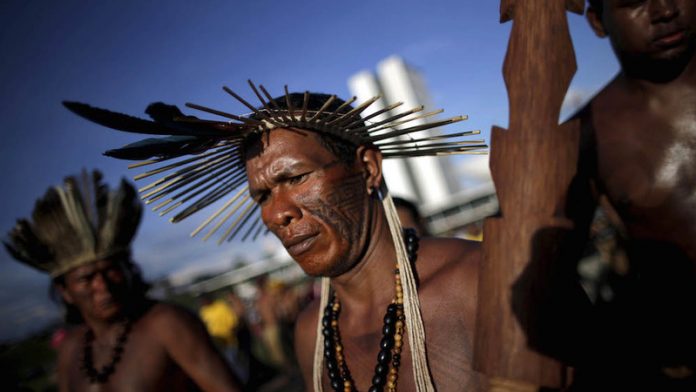 How is it that in a year stuffed with conferences on environment and human development, from climate talks in Paris to on new development goals in New York, those actually trying to save the environment are, at best, dismissed as enemies of progress and, at worst, are being killed at an increasing rate and with almost complete impunity?

There is a recognisable theatrical form at United Nations summits where environmental agreements get negotiated and signed. It starts with general anticipation, the unreasonable expectations and triumph of hope over experience. There are the well-meaning but often leaden stunts by campaign groups in conference halls. Rumours flow for days like tides about good and bad deals being cut. Then insomniac civil servants wage all-night battles, like mythic warriors transplanted to the set of The Office, over the wording of compromised treaties. The final act always combines face-saving statements against a chorus lamenting how far short proceedings have fallen. And then the cycle is repeated.

If you’ve ever been to one of these events, you’ll have experienced the air of unreality and disconnection they have in common. Air-conditioned, lacking natural light, fuelled by listless, overpriced corporate catering, they couldn’t be more removed from the natural environment they are meant to protect.

It’s a world far removed from the grief of the family of Daniel Humberto Sánchez Avendaño, the 19-year-old Colombian environmentalist murdered after being harassed by police and threatened because of his campaign against a local mine. Or that of Henry Alameda, an indigenous leader in the southern Philippines and an active member of a group protesting against mining and plantations in the Caraga region, who was killed by paramilitia.

Last year more than two activists a week were killed struggling to defend their environment and land. That represents an increase of 20% over the year before, and is about double the number of more high-profile and equally tragic killings of journalists in the course of their work. The updated research by the international nongovernmental organisation, Global Witness, is almost certainly an underestimate because countless crimes, often happening in remote areas, go unreported. Worse, the very authorities who should be investigating are often implicated. Among the few cases that were well documented, 10 involved paramilitary groups, eight the police, five privately hired security guards, and three the military. Research on killings of activists in previous years revealed that only about 1% led to trials, prosecution and conviction. Central and South America remain among the most dangerous places to be an environmentalist.

From the struggle for land and food systems that are best able to guarantee the livelihoods of people in poverty to protecting the webs of plant and animal diversity that maintain our life-supporting ecosystems, local residents have a central role in determining the direction of development.

As we place ever more stress on the environment by undermining soil fertility, driving countless species to extinction and triggering climatic upheaval, voices such as those of Avendaño and Alameda should be on the world stage, not buried beneath the earth.

Work by the British Antarctic Survey shows that we have already reached a level of greenhouse gases in the atmosphere at which, millions of years ago, the stability of the great ice sheets was compromised to the extent that the planet experienced chaotic rises and falls in sea level. It is as if a slow-motion carbon bomb is exploding. Part of the explanation for officialdom’s enduringly sanguine response to this prospect may be that in their comfortable conference halls they are so removed from the real world of storms, droughts, failed crops and battles over resources.

It is community-based defenders of the environment who really know what undermines their livelihoods. They are like environmental bomb disposal experts, risking their lives on the frontline. Of those killed, a shockingly high proportion, 40%, were indigenous people – a stern rebuke to those who try to brand environmentalism a northern, middle-class concern.

Instead of ignoring activists’ existence or, worse, having them tried as terrorists, governments should be monitoring and protecting them as if their own lives depended on it. – © Guardian News & Media Ltd, 2015

Andrew Simms is the author of Cancel the Apocalypse: The New Path to Prosperity and a cofounder of the New Weather Institute

The paradox of customary marriages