Constitution the winner in EFF victory 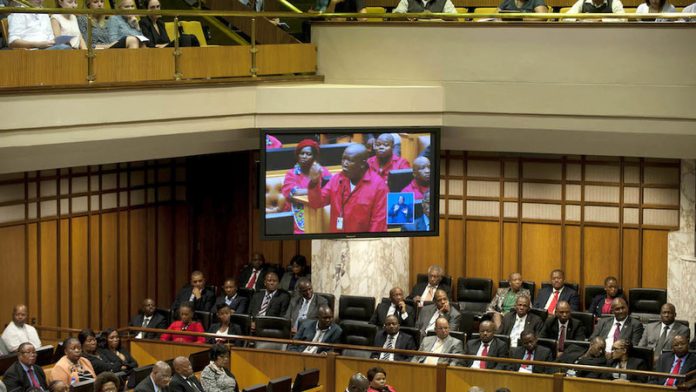 The Economic Freedom Fighters might assail the Constitution as they promote their populist rhetoric but, like the Democratic Alliance, they have also become regular litigators who find success in court against the ruling party.

Last week EFF chief Julius Malema won his application against the chairperson of the National Council of Provinces (NCOP) and the ANC to set aside a ruling that he be removed from the National Assembly as a result of a statement he made during the State of the Nation debate in June 2014.

During this debate, Malema said that “the ANC massacred 34 [striking workers] two years ago”. He then repeated that “the ANC massacred the people in Marikana”. Minister in the Presidency Jeff Radebe objected to these statements, contending that they were unparliamentary. The following day the presiding officer, Thandi Modise, ruled in favour of the Radebe objection and, when Malema refused to withdraw his remarks, he was ordered to leave the house.

In support of his application to the court for the setting aside of the Modise ruling, Malema argued that the statements he had made in the National Assembly were intended to hold the ANC responsible for the deaths of 34 miners, and that no reasonable person could have interpreted his statements as meaning that individual ANC members had committed murder.

In opposition to this, Modise contended that the only way in which a member of Parliament can accuse fellow members of criminal activity is by way of moving a substantive motion before the house that properly motivates the basis for the claim. It was, in her view, impermissible not to introduce such a motion and still “impute improper motives to other members … or cast personal reflections on the integrity of members”.

Judge Lee Bozalek, of the Western Cape High Court, began his judgment by reminding the parties that the starting point in adjudicating on such disputes is the Constitution. It enshrines the principle that the National Assembly is a body elected by the people as part of a system of democratic government “to ensure accountability, responsiveness and openness”. For this reason, the rules of Parliament must safeguard freedom of expression, including, quite obviously, the robust use of this right.

Even as the judge acknowledged that the doctrine of separation of powers sets boundaries on the powers of courts, he noted that a court must determine the case on the basis of whether the speaker of the National Assembly or the chairperson of the NCOP comported herself within the confines of the Constitution. Hence, when Modise invoked the rules of Parliament to discipline Malema, she was obliged to act lawfully.

The relevant rule prohibits a member from flouting the speaker’s authority or acting in a grossly disorderly fashion, but it cannot be employed to stifle the right of a member to express robust criticisms. As counsel for Malema, Wim Trengove SC, told the court, in applying the rule to statements made by MPs, the prohibition was confined to “don’t become personal”.

Bozalek reasoned that to find that Malema breached the rule the court would be required to hold that Malema meant that individual ANC MPs had deliberately decided to massacre miners at Marikana, and were therefore guilty of murder. As the judge said, “One has to assume that the first applicant’s remarks were directed or could reasonably be understood to be directed at the president and all members of the Cabinet and that such persons had deliberately decided to massacre the people of Marikana.”

In the view of the court, this could not be a reasonable reading of a statement that, viewed in its proper context, Malema was holding the ruling party responsible for the killing of 34 miners because the police who shot the miners represented the ANC.

It was thus not a reasonable reading of Malema’s claim that individual ANC MPs had committed murder. Thus the NCOP chairperson acted irrationally and without justification in deciding Malema had breached the rules of Parliament.

This judgment represents another powerful judicial assertion of the critical importance of freedom of expression in our democracy in general and particularly in the national debating chamber, Parliament.

Sadly, the judgment offers further confirmation of the disturbing inability of the presiding officers in Parliament to exercise the kind of impartiality that is required of so august an office.

In the light of the EFF victory in court, the question arises as to whether it may gain a greater appreciation of the importance of the Constitution, the relevant provisions of which have afforded its members the protection of their vital rights.

Those who mindlessly blame the Constitution for all the ills of the nation should read this judgment and ask whether, on balance, we are in a far more democratic space than we would be without such a Constitution.