Ombudsman: Reason can demand use of shocking images 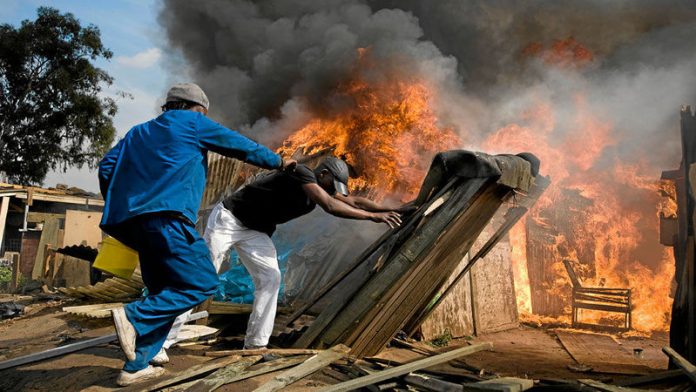 We have been here before. In 2008, during a previous round of xenophobic violence, images of a man burning to death shocked the country.

The Mozambican had been attacked and set alight in Johannesburg’s Alexandra, not far from a group of police officers and journalists. Police tried to put out the fire and save him but he died.

Pictures of his last moments, sitting on the ground in his own funeral pyre, appeared on many front pages.

It didn’t end there. At first, he was nameless, just a symbol of violence. But in follow-up reports, journalists identified him as Ernesto Alfabeto Nhamuave and told his story, including the return of his body to Mozambique and his burial.

Last Saturday another Mozambican was attacked in Alex. Images of Emmanuel Sithole’s murder ran on the front page of the Sunday Times the next day. The only difference was that this was a stabbing.

Images of such violence are clearly shocking, and editors need to think carefully about publishing them, as well as about where they are placed.

There is a big difference between the front page and pages inside the paper. On the front page, the violence is forced on anybody who simply notices the newspaper in a shop, including children. Placed inside, pictures are only accessible to those actively reading the newspaper.

It is worth trying to understand the different reactions such images draw. The violence is horrifying to see, and the fact that it is real puts it in a completely different category to the fictional violence we are accustomed to seeing on television and in films.

There is something profoundly disturbing about witnessing somebody being killed. We are forced to be passive observers of a man’s most private and desperate moments as he fights for life.

Some people react with a ghoulish fascination, the kind of curiosity that makes people stare at accident scenes. Others dislike being forced into a kind of voyeurism. The violence is unpleasant and it is tough to be dragged into the situation without being able to intervene. Many of us may have some mix of these feelings.

There is always another, much smaller audience that must be borne in mind: friends and family of the victim. For them, the horror is of a completely different order. Imagine your father, sister or child dying publicly on the front page of the newspapers.

And, to add another layer of complexity, there is the issue of race. Many have pointed out that black people are more easily shown in these kinds of images. It’s additional reason for editors to think carefully before using the images.

A decision to publish carries the risk that the newspaper will be criticised on a number of grounds, including being insensitive to the broader audience and the relatives of the victim, appealing to the audience’s base instincts to boost circulation, and for feeding a particular set of stereotypes.

But pictures can play a role in bringing home an important reality and, if the story is significant, this can outweigh the offence caused.

There’s no question that the outbreak of xenophobic violence is a story of the utmost importance, because it hurts the country in many different ways.

As South Africans, we need to own the ugly truth of it. People living in wealthy suburbs can’t brush away the violence and believe that it belongs elsewhere. It is too easy to take refuge behind the gulf that cuts through our society; to absolve ourselves simply because we didn’t wield the knife that killed Sithole.

The briefest moment of introspection must reveal that poverty and inequality are at least factors in this kind of violence. Xenophobia is our shared story. If publishing a shocking image can do something to cut through the smugness, then it is worth some offence and discomfort.

At a more practical level, the reportage seems to have had some real consequences. It has made Sithole’s name and story a matter of public concern and may have helped to secure the arrest of four men in connection with the killing.

It may well have nudged the authorities into strengthen their response to the events. This has been slow – and marred by attempts to find scapegoats, including foreigners themselves and, as usual, the media – but at least the response has been scaled up.

Apart from issues regarding the use of the pictures of Sithole, the reporters involved have been criticised for not making a greater intervention. James Oatway and Beauregard Tromp have described in interviews an attack that was brief – less than two minutes – ferocious and could easily have turned against them. They encouraged Sithole to flee and took him to hospital in a vain attempt to save him.

Other players might have been able to do something to alter the course of events, including witnesses and the medical staff, whose response seems to have been inadequate.

We should be careful not to judge the reporters too quickly. Who knows with certainty how we would have acted in such a crisis. The real test is what we do next, as a country, to deal with xenophobia, and the factors that fuel it.

The Mail & Guardian‘s ombud provides an independent view of the paper’s journalism. If you have any complaints you would like addressed, email [email protected]. You can also phone the paper on 011 250 7300 and leave a message