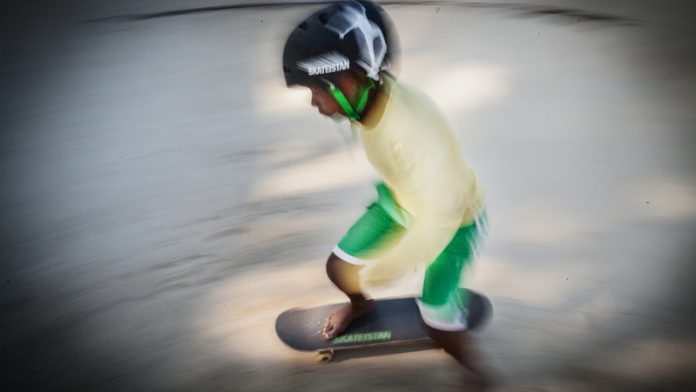 It started with four wheels, a deck and an Australian skating around Kabul. It made Oliver Percovich something of an oddity back in 2007, but it also drew the curiosity of the local children. Especially the girls.

For them, riding a bike was considered culturally inappropriate. But what about a skateboard? This loophole inspired an idea that would shift the statistics of an entire country. One skater became many and a nongovernmental organisation was formed from the landslide. Enter Skateistan.

Percovich’s goal: use skateboarding to address gender inequality by creating equal opportunities for the youth.

With start-up funds from private donations through Skateistan’s website, Percovich – who was initially in Afghanistan to look for a job as a researcher – obtained a $15 000 grant from the Canadian government and another $35 000 from the Norwegian embassy. Skateistan used the money to build two skate schools, one in Kabul and the other in Mazar-e-Sharif.

Skateistan scouted for locations and discovered the David Webster Park in Troyeville, Johannesburg, which was trash-filled but already had a skate bowl. (Photos: Gustav Butlex, M&G)

These schools are now the biggest indoor sports facilities in the country. Staffed primarily with local skaters who have come through the Skateistan programme, each is equipped with a skate park, classrooms and teachers who focus on tutoring creative arts. Now, nearly eight years on, skateboarding is the largest female sport in the country.

Since its launch, Skateistan has won numerous awards for its work, including the United Nations’s Golden Dove of Peace. A documentary about the group, Skateistan: To Live and Skate in Kabul, was screened at the Sundance film festival in 2011. In the same year the group – through private funding and, later, through the Tony Hawk Foundation – expanded operations to Cambodia.

In January 2014 they set their sights on another country: South Africa. Specifically Jo’burg.

“It was a joint idea between Skateistan and some of our biggest supporters,” says Percovich, who hopes a strong organisation here will provide a springboard into the rest of the continent.

Park cleanup
The location for one of their outreach sessions is Troyeville’s David Webster Park. The afternoon is unusually hot for this time of year, but the children don’t seem to mind. Most are more concerned with the freedom of a swing at full tilt.

A car, silver with bumper stickers, rolls down the access ramp. One of the children sees it and screeches “It’s three!” The words are high- pitched, almost painful, but set into motion nearly every pair of legs in the park, all of them heading toward the car for their 3pm skate session. In the space of a breath the jungle gyms and swings stand empty and a waist-high crowd throngs the Skateistan crew.

“Once we started coming on a regular basis the kids expected it, and started to show up,” says Skateistan’s operations director, Brandon Gomez. The 28-year-old, originally from Philadelphia, has been part of Skateistan since 2011 and had a hand in the Cambodia and Afghanistan projects.

The children participate in an art class before every skate session that aims to teach them about the world around them.

When scouting for locations in Johannesburg, the first place that stood out for Gomez was the David Webster Park and its skate bowl.

“It was completely filled with trash and the kids weren’t even using it,” he says. “So we organised a big cleanup of the bowl and repainted it with the kids. We then started doing biweekly skateboarding sessions.”

The team brings skateboards, helmets and knee and wrist guards to each session. For now these will remain in the boot. The first hour is dedicated to teaching the children about the world around them through art projects. This takes place in an adjacent building ­– a simple four-walled room to which the NGO has been given access through a partnership with the park.

The class is run by Jordan Saltzman, a part-time member of Skateistan with a background in art therapy. Today she is teaching the children about the Chinese New Year, and the task she’s set is making paper ­dragons – a creative way to get the children to learn about Chinese culture. Only once all the cutting and gluing is over are they allowed to head outside to skate, under the supervision of the team.

David Webster Park was cleaned up and soon about 20 children had become skateboarders.

Ayanda Mnyandu, Skateistan’s local operations officer, stands at the head of the queue and hands out the boards.

“It sounded like a great project and I wanted to get involved,” says 24-year-old Mnyandu, who has an economics degree from the University of Pretoria. “I mean, it’s pretty cool. I grew up around here.”

Seeing skateboarding as a way to build the children’s confidence and show them that the world is so much bigger than their home town, Mnyandu joined Skateistan in March last year.

The team’s sports co-ordinator, Kelly Murray, who has a background in sports education, is helping to prep the session. She recently won the Kimberley Diamond Cup South African Women’s Street Championship, making her one of the best female skaters in the country. Her presence and expertise in the sport helps to battle a stigma that skating is for boys.

Girls on skates
Skateistan estimates that, worldwide, only about 5% of skaters are female. Thanks to the NGO’s efforts, that gender imbalance has shifted in Afghanistan and now about 40% of skaters in that country are female.

It’s that sort of shift Skateistan is after and extra effort is put into any girl who wants to try out the sport.

It is perhaps less of a problem at the David Webster Park than it is at Skateistan’s outreach programme at the youth centre on Harrison Street, associated with Let’s Go Jozi and youth NGO Oasis. The girls here are a little older and a touch more self-conscious about getting on a board.

Skateistan has built a scenic skate ramp and half-pipe on the top of a building in downtown Johannesburg, attracting children from as far as Soweto.

Oasis has given Skateistan access to their centre and the team has used the rooftop to build a skate ramp and half-pipe. The area has been fenced off and secured with safety netting – an important component, considering it’s three storeys up and a stray board would more than ruin someone’s day.

It is a remarkable location, surrounded by the tops of buildings and the ambient breath of a city in motion. Some of the children who come here to skate live as far away as Soweto.

After another creative-arts class, the group heads to the rooftop. Gomez and Mnyandu begin teaching a few of the newer children some basics, showing them how to stand and turn or holding their hands while guiding them down the mini-ramp.

It’s here that the other member of the team, operations manager Chris Ray, teaches two of the more proficient skaters how to ollie – which involves both the skater and the board leaving the ground in a jump. Ray, who designed courses for California Skateparks before joining Skateistan’s international branch in 2012 and working in Cambodia, will lend his expertise to Skateistan’s proposed educational facility in downtown Johannesburg’s Maboneng.

The facility will occupy three storeys, the bottom two of which will be classrooms and the topmost floor will provide office space for the NGO. Ray will be in charge of designing and building the outdoor skate park.

Brandon Gomez from Philadephia, US, gives a learner skateboarder a helping hand.

Propertuity, the urban regeneration company at the forefront of many of the Maboneng revival projects, has agreed to give Skateistan a 20-year rent-free lease for the land on which the facility will be built.

“The whole thing has been pieced together from different people getting involved in different ways,” says Gomez.

The Maboneng facility, which is to be constructed off-site, was designed pro bono by Dubai-based architect Mike Scott. Since then the plans have been with MWP Architects – a firm that specialises in green design principles which is also working pro bono to get the plans council-ready.

Back at the rooftop skating facility it’s easy to see why people are willing to jump aboard this project.

“It’s pretty crazy, huh? Seeing kids skating on a rooftop in the middle of the city?” Gomez is watching two of the more experienced skaters take on the half-pipe. To the left the home affairs building looms large and cumbersome, casting an afternoon shadow.

One of the skaters climbs the pipe to attempt a drop-in. Once at the top he stands, leaning back with the board’s wheels jutting over the precipice. His board hits the ramp with a crack and then he’s moving at speed, speed he evidently can’t handle because he wobbles and bails. The tumble is light, the impact taken by his pads, and when he gets up his grin is sheepish. On his second try he lands the drop-in.

This time his smile is broad, stoked in an expression that cuts to the core of what Skateistan is trying to inspire.

What could be a landmark case seeking recognition for a woman’s right to inheritance and maintenance in the event of her partner’s death, is currently being adjudicated
Read more
Africa

If we increase the number of high-growth, women-founded startups, they can bridge the inclusivity gaps in their respective economies and societies
Read more
Analysis

The verdict highlights a number of critical issues required to build systems, processes and advocacy when it comes to working in the space of gender-based violence
Read more
Analysis

Modern development strategies often recognise the pivotal importance of enabling women to fulfill their potential and contribute effectively to their economies. Yet they fail to recognise the need for concerted action to protect women from violence
Read more
Opinion