No term limits for DA leader 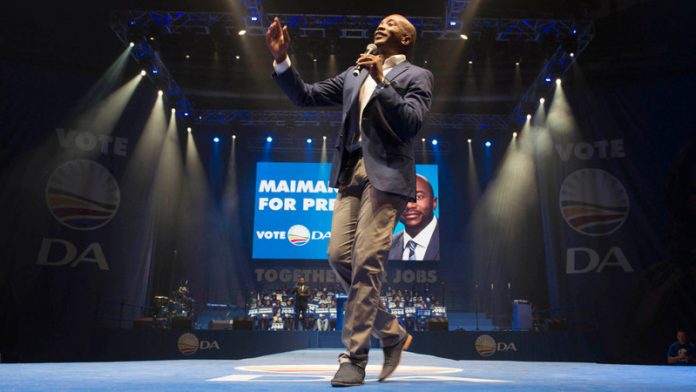 The Democratic Alliance wants the federal leader to stay in that position for as long as the incumbent pleases, so long as the person adds value to the party and is popular enough to get re-elected.

This is contained in the official opposition party’s constitutional amendment document seen by the Mail & Guardian this week.

The party’s constitutional review committee has rejected a proposed constitutional amendment to have a three-term cap on the reign of the federal leader.

This position was left vacant by Helen Zille a few weeks ago. The DA’s Parliamentary leader, Mmusi Maimane, and federal chairperson Wilmot James are the frontrunners for the position as the party prepares to vote for a new leader on May 9 at the party’s congress.

Nicholas Farrell, a 17-year-old Durban matriculant who, in March, said he would contest Zille as a protest candidate and later pulled out, called for the party leader’s term of office to be limited to three terms.

Member proposals
Unlike other political parties, the DA allows individual party members to send proposals for constitutional amendments and congress resolutions to appointed committees. Such suggestions are considered, based on support within the party’s leadership.

The constitutional review committee rejected the proposal on the basis that it would be “short-sighted to limit the term [of office] of a leader who the party may wish to keep and who can still add value to the party”.

It is expected that policy proposals and proposed constitutional amendments will be debated at the party’s congress in Port Elizabeth next weekend.

The constitutional review committee has also rejected a proposal made by DA Western Cape MPL Masizole Mnqasela for the party to create a position of deputy federal leader. This is not the first time that Mnqasela, who wants to be elected as the DA’s next federal chairperson, has made this proposal. He lost the bid at the 2012 congress.  The proposal was rejected once again on the basis that the party leader role is different to a managerial position and responsibilities would be difficult to delegate to a deputy.

Political analyst Piet Croucamp said there were growing contradictions in the DA.

“Now there is a lot more voices. I think there are high levels of stress in the party because there is now no consensus on contentious issues,” he said.

Broad issues
The draft resolution document circulated to congress delegates and seen by the M&G does not have specific new policies on the cards. Instead, issues are looked at more broadly.

“There is serious policy uncertainty in the DA. There is no one to guide policy and enforce it,” Croucamp said.

The party did not have sharp and specific policies on controversial issues such as land reform and broad-based black economic empowerment, he said.

On land reform, the party would resolve that, should it become the government of the day, it would prioritise the rapid expansion of individually owned assets through the provision of title deeds to the poor.

“Land reform, whether it is urban or rural areas, [should] be considered by the DA as the rapid expansion of property rights to be historically excluded – with particular emphasis being placed on the expansion of unencumbered title deeds and inclusive, well-designed share equity systems,” the party document says.

Private property
The DA has acknowledged that broad-based access to ownership of private property is important if poverty is to be eradicated and that the expansion of individually owned assets would contribute to expanding the economy.

It has also resolved that the policy position of the ANC government to pursue state ownership of assets be rejected by the DA in favour of a policy that allows previously disadvantaged individuals to own property. It does not, however, say how it will go about doing this.

State ‘regimes’
The party said the only economies still dominated by the state were “undemocratic, totalitarian regimes”.

“The South African political space is dominated by populist calls for nationalisation as a solution to the job crisis,” the document reads.

The party still stands by its long-held view that talk of nationalisation deters investors.

The nationalisation discussion was put on the agenda by the former leadership of the ANC Youth League under Julius Malema in 2010. Malema is now the leader of Economic Freedom Fighters. Nationalisation has been part of political discourse since then, despite the ANC’s 2012 national congress rejecting wholesale nationalisation but deciding rather to agree to state ownership of strategic resources.

The DA will also emphasise its commitment to market-oriented solutions and growing the economy as the solution to the country’s unemployment crisis.

‘Training modules’
The document said the party needs to “develop the necessary training modules so that DA members are able to refute nationalisation arguments in their communities and grow support for a market economy”.

The DA is also expected to decide on a campaign for the amendment of the country’s electoral system, by dividing South Africa into 100 constituencies, each with substantially the same population numbers.

“The registered voters in each constituency will directly elect three members of the National Assembly, using a single transferable voting system,” the draft resolutions document reads.

“A further 100 members will be allocated to the various parties, in such a way as to ensure that the overall composition of the National Assembly reflects the proportions of votes cast for those parties as closely as possible.”

Energy crisis
On the energy crisis, the DA said that if the party was in government it would prevent Eskom from overcharging customers and stop the payment of exorbitant salaries and bonuses to the parastatal’s executives.

In 2014, Eskom’s top 10 executives received R11-million in bonuses on top of their collective salaries of R32.7-million per annum.

Also on the DA’s wish list is making Eskom’s procurement of diesel and coal transparent in an effort to minimise corruption and wasteful expenditure. The party wants to make the maintenance records of Eskom public and institute an independent inquiry into the mismanagement of the state-owned enterprise. In addition, the DA would like to see a panel of experts established to evaluate the situation at the power utility and report back to Parliament on viable solutions.

Eskom has been struggling to meet energy demands. The completion of its two new power stations, Kusile and Medupi, has been delayed and they are only expected to be operational in 2022.

Croucamp said the DA lacked strategic thinkers to come up with solid and innovative policies.

“They manage policy on an ad hoc basis and they do it in a pragmatic way,” he said.

‘Sweeties’ (cigarettes) for R150, and marching on Parliament — an insight into the social-media groups popping up to push back against lockdown regulations
Read more
Advertising
Continue to the category
Coronavirus