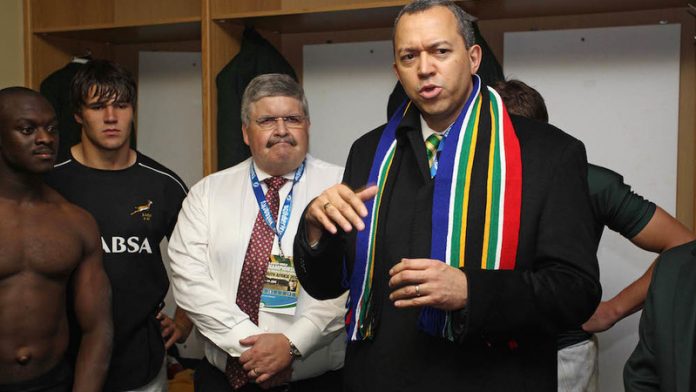 While the Stormers and the Bulls tussle to win the South African Super Rugby conference, no matter how ugly they look doing it, a storm is brewing off the field.

Oregan Hoskins, the normally self-contained president of the South African Rugby Union (Saru), has had enough of inconsistent judiciary rulings.

And, quite remarkably, Hoskins has described himself as at his wits’ end after the heavy punishments meted out to Sharks bully boys Bismarck du Plessis, Jean Deysel and Francois Steyn, yet chokeholds by the likes of Liam Messam, a knee to the head by Hurricanes lock James Broadhurst and multiple red cards for James Horwill of the Reds either went unpunished or were met with a mere one-week ban.

This week, Force scrumhalf Ian Prior received a scant three-week ban for a horrific tip tackle that was late and well after the whistle.

What has particularly irked Hoskins is that Steyn’s initial lack of punishment was appealed by Sanzar, whereas no other decision has apparently met this murky threshold for a governing body appeal against its own judicial officer. And now Hoskins is determined to get to the bottom of this.

Perhaps the reason for Hoskins’s frustration is that he is finally realising what has long been obvious to any dispassionate observer – New Zealand and Australia take their African partner for granted.

We provide the bulk of Super Rugby’s audience, exhaust our players with incessant touring, put up with the conference system and then receive the short end of the stick in almost every facet of tournament decision-making.

To be sure, the inconsistency does not excuse some of the thuggishness of our players. For some reason, there is a certain brand of South African player that explodes when sufficiently needled. It has something to do with the rather bizarre fervour with which we play and support the game.

For example, no New Zealand team runs out in numbered order, nor do they form the team huddles on the field that so many South African teams use to get themselves into the frenzy that is apparently required to play the South African way.

But all that does not alter Hoskins’s point. Wrong-headedness needs to be punished fairly on both sides of the Indian Ocean.

The fact that this does not seem possible in the current Sanzar set-up, in which there is no acknowledgement that there even is a problem, is symptomatic of the wider fracturing of what used to be a highly beneficial partnership.

Super Rugby was once the greatest rugby tournament on Earth. Supporters would wake up early on weekend mornings to catch the old Australasian afternoon games in our predawn hour. It is probably a good thing all the overseas games are now played at night.

It is time to look north.

Australasia’s natural allies will soon be Japan and the South Pacific islands.

In the television age, it makes little sense to divide the rugby world into north and south, and thus partner with countries across wide time zones. It is also probably fair to say our rugby culture has more in common with the northern nations than Australia and New Zealand.

Even more crucially, the northern hemisphere nations have been able to create an entertaining European Cup and still maintain the prestige of the French Top 14 and the English Premiership.

Neither Australia nor New Zealand has meaningful internal domestic competitions and so we have allowed the incessant derbies of the Super Rugby conference system to devalue our Currie Cup.

Super Rugby has always been slightly disjointed in this fashion – most big team sports tend to aim to preserve the local competition while internationalising their sport in the form of a champions’ league. We have done the opposite.

Reversing this should be the aim of our administrators. South African rugby needs a strong Currie Cup that can be linked with a “central hemisphere super-league” of sorts.

Obviously this may cost Saru money. But it is becoming increasingly obvious that Super Rugby has some serious long-term issues – of which the judiciary is but one of the symptoms.

Changing course now may be the only way of ensuring our local game does not go the way of domestic cricket – into irrelevance.