Don’t light up in New Orleans 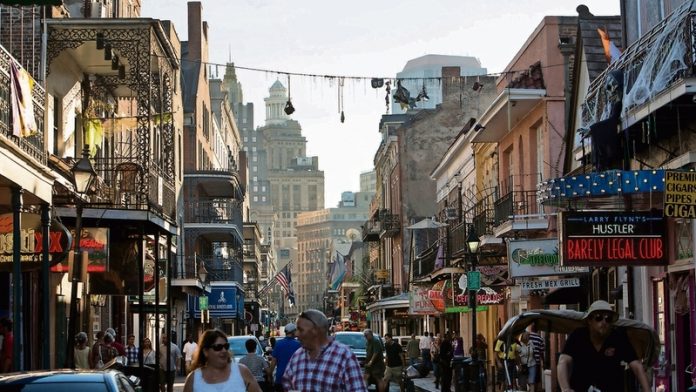 As of last week, you can no longer legally smoke a cigarette inside a bar in the world’s drinking capital, New Orleans, Louisiana.

Perhaps you gasped upon reaching the very end of that sentence. City after city have dealt Big Tobacco the harsh blow of banning indoor smoking. But other cities don’t lure in tourist dollars by aggressively advertising a “do watcha wanna”, laissez les bon temps rouler, attitude. An indoor smoking ban here — which also forbids “vaping” — will reap consequences as unique as New Orleans’s cultural ecosystem itself.

“You just opened up a can of whupass on lots of neighbours in the city,” says Nick Scramuzza, one of three owners of Lost Love Lounge in New Orleans’s Marigny neighbourhood. Scramuzza doesn’t look forward to the new noise complaints he’ll receive when half of his customers end up spending their time five feet outside his door (the legally mandated distance) enjoying that holy trinity of smoking, drinking and carrying on.

Nor is he necessarily in favour of the government bossing everyone around in such a sweeping manner. “But I wake up with a hangover just from working around the smoke,” Scramuzza shrugs. “So I’m excited about the ban.”

As the Wall Street Journal recently reported, the New Orleans city government has, since Hurricane Katrina, begun trying to prune some of its cultural shrubbery, turn down the volume a bit. Abetted by uptight neighbourhood groups, the city has begun policing bars and nightclubs more strictly, while at the same time fighting a protracted battle to implement a new “noise ordinance” (read: music ordinance) while also debating an impending comprehensive zoning ordinance for the entire city that, to some residents’ dismay, creates more permissive music laws in some instances.

“This is just the wrong time for them to have pursued something like this,” rails William Walker, another of Lost Love Lounge’s owners who, for reasons of personal choice and personal inconvenience, hates the anti-smoking law. “Forcing people outside the bar to smoke is going to exacerbate the tension that’s already there. And when they look to fix that problem, what they will say is ‘no go-cups’, which the neighbourhood groups are already working on …”

Lost Love Lounge lives in a relatively quiet residential-seeming neighbourhood — as do many of New Orleans’s best bars and some of its live music spots. This neighbourly co-existence is a big part of what makes New Orleans different, and charming like some alcoholic Sesame Street. Recently though, this unique social contract has become unacceptable for those they call nimbys (Not in My Backyard), and the fate of New Orleans’s musical personality feels at stake.

Martha Wood lives beside a loud bar that hosts live music.
“The bar was one of the deciding factors in me buying the house, so I won’t ever complain about the noise,” says Wood, who also manages the St Roch Tavern, a live music bar which, following a series of noise issues in 2013 — including complaints about the loud smokers outside — became one of New Orleans’s first ever watering holes legally disallowed from serving drinks to go.

A grey area
The city also mandated St Roch a closing time, like a regular bar in a regular city. “Now any small infraction could get us shut down,” says Wood. “We recently installed a smoke eater to help with the smoke because we can’t open the doors at night because of the ‘noise’. There is so much grey area in this law that they can, and will, use against us.”

The Maple Leaf club where ReBirth Brass Band made its name playing every Tuesday night, went smoke-free voluntarily in 2014. As did club d.b.a. on Frenchmen Street, where artists such as singer John Boutte had been demanding smoke-free nights.

“A lot of the performance venues were already starting to show that consideration to performers, so I wish the city would have just let that happen instead of forcing the ban into every corner bar that doesn’t host music,” says Zalia BeVille, a smoker, and manager of live entertainment venue All Ways Lounge, which went smoke-free two years back because, she says, “the horn players and the chanteuses, they asked us for it”.

Luckily, All Ways has an outdoor patio, unlike Lost Love Lounge, whose third owner, Geoff Douville, also a working musician, loves the ban; he’d previously felt forced to live with smoke to keep his bar financially viable. “There’s no way I could have banned smoking in my bar without it being a rule throughout the whole city,” says Douville. “People act like I have that choice, as a business owner. But if I make that rule, they walk down the block to a bar with smoking. So I need it to be uniformed across the board for everybody.”

Unlike most other cities, New Orleans also allows gambling — not only at our Fair Grounds racetrack and Harrah’s casino (a major job creator in New Orleans), but also in the many corner bars hosting video poker machines. Harrah’s sued the city recently for a partial exemption in a class-action suit along with several dozen French Quarter bars.

Harrah’s company claimed to Nola.com that the smoking ban could cut yearly sales tax collections by $500 000, and jeopardise the $3.6-million in gambling money the state sends to the city to cover some safety and sanitation. State law mandates the first $1.8-million toward cleanup and cops just around the casino, before the next $60-million goes toward a state education fund. Essentially the smoking ban could make Louisiana kids dumber, they say.

A great business opportunity
Many small business owners also fear smoke-free revenue loss. Smoker Neil Timms owns the Crown and Anchor, an old-school English pub across the river from the French Quarter in Algiers. Timms met the smoking ban before, in England. “Back home in Coventry, every pub where I was a regular closed within a year of the smoking ban,” remembers Timms of the ban, begun in 2007. To avoid the same fate, he’s spending money to build a patio.

Lost Love’s Douville, though, feels the ban to be a great business opportunity. “The amount of latent people who would enjoy coming out to our bar, with our food, but would never come because they didn’t want to smell like smoke for the next seven days — we’re now an option for all those people.”

Councilwoman LaToya Cantrell, who introduced and pushed the ban, begs to differ: “The responsibility is on the bar owner to keep your clientele respectful outside your establishment as well,” she states flatly. “The owners and bartenders need to tell them to go have a smoke but be respectful to their communities. The idea that we can’t have clean air because it will cause noise problems is ridiculous. It can be a win-win. I think it’s about communication, and creating partnerships between the communities and the businesses.”

Cantrell does acknowledge our city’s uniqueness in terms of a smoking ban. “How is New Orleans different from the rest of the country? Well, we’re four times the national average in health disparity, and the majority of people here are African American. New Orleans is also the only place known as ‘The City That Care Forgot’,” she says.

“New Orleans needs to finally stand up and say ‘we care about our people in way we haven’t before.’ The most vulnerable people who are working in [smoky] conditions, these citizens are the backbone of our hospitality industry, which drives the economy in the state of Louisiana.

“New Orleans is [also] going through billions in infrastructure improvements in our hospital system,” she adds, a nod to the city’s post-Katrina economic growth spurt, “so it just seems misleading to talk about the healthcare industry, and how it’s growing, and the quality of healthcare improving, when we’re still letting our people work in these environments.”

Bring on the ban
She puts the argument to rest, adding: “New Orleans is also unlike other places because you do have the option of taking your drink outside with you when you go out to smoke your cigarette.”

And what of already vulnerable bars like St Roch Tavern? “If [those being loud outside] are not the patrons of the bar,” says Cantrell, “the bar should call the police.”

Many worried that the already strained New Orleans police department (to put it politely) didn’t need any part in policing smokers. So, the health department will handle bar warnings and fines. Nola.com reported that: “The bartender, manager, or owner is required to tell them to stop [smoking] and, if they refuse, ask them to leave.” Bar customers are encouraged to: “Come fill out a form or call 311 [and] to include date-and time-stamped photographs documenting illegal smoking.”

Geoff Douville is not worried and says bring on the ban. “Watch: the nosy neighbours who complain about the noise now are gonna be the same ones wanted the smoking ban to begin with.”

The Big Easy is much like small-town South Africa — charming, with poverty in the back streets
Read more
Friday

Soweto International Jazz Festival aims to facilitate encounters with the locals that extend beyond what existing tourism initiatives have achieved.
Read more
World

The witch that refuses to be buried

A symbolic funeral held to give hurricane victims closure has highlighted the ongoing trauma faced by those who fled and those who have returned.
Read more
World

US government and BP officials are warning that the blown-out oil well causing a disaster on the Gulf Coast may not be stopped until August.
Read more
World

Gulf oil spill hits day 40 with no end in sight

The oil spill hits its 40th day on Saturday with Gulf residents clinging to one hope: that BP's complicated "top kill" operation will plug the well.
Read more
Advertising
Continue to the category
Politics