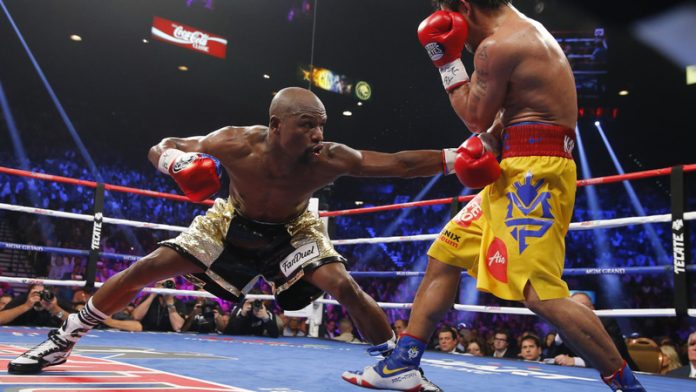 In many ways, it was a case of “job done” on Saturday night at the MGM Grand Garden Arena where the 38-year-old American Floyd Mayweather once again showcased his brilliant defensive skills as he won a unanimous decision over Manny Pacquiao in their title bout.

Pacquiao is renowned for his aggression and speed, but the Filipino southpaw was continually outsmarted by Mayweather who, despite back peddling for much of the bout, controlled the pace of the fight and the geography of the ring.

Mayweather, a polarising figure because of his arrogance, flamboyant showmanship and controversy over his history of domestic violence, improved his career record to 48-0 and said during the post-fight news conference that he would fight once more, in September, before retiring from the sport.

Should that pan out with the American winning his final bout, he would match the iconic 49-0 record achieved by former heavyweight champion Rocky Marciano.

That would certainly be a legacy.

Yet always with Mayweather there are shades of gray in what could be a stark black-and-white reminder on paper of his superb career as a professional.

All too often, he has been criticised for hand-picking his opponents, and there is also the question of his relatively low knockout rate, just 26 for a boxer who prides himself on staying out of harm’s way whenever possible in the ring.

Boxing great Oscar De La Hoya, who was beaten by both Mayweather and Pacquiao before calling time on his own glittering career, was distinctly underwhelmed by Saturday’s fight – mainly because of the American’s style.

“Sorry boxing fans. Call me old school but I like the fans getting their money’s worth by watching an action-packed fight,” De La Hoya tweeted after what is expected to be the top grossing prize fight of all-time.

“I’m just not into the boxing, running style. I like jumping out of my seat because a fight was existing and the fans got their money’s worth.”

The fact that it took more than five years to make the fight happen was also part of the problem.

Peak of careers
Granted, Mayweather and Pacquiao are the greatest boxers of their generation but, at the respective ages of 38 and 36, they are in the twilight of their careers and most pundits believe they have lost some of their skills in the ring.

Had the so-called megafight taken place in 2010, with both men in their prime, their contest could well have been a genuine classic, given their contrasting styles.

For Mayweather, however, Saturday’s action and outcome provided proof that he is continually undervalued by the media and by many boxing fans

“Everyone’s been saying for years that Floyd was scared and I would lose (against Pacquiao),” said the American, an 11-time world champion in five weight divisions who expects to make a mind-boggling $200-million from his showdown with Pacquiao.

“I try to keep myself away from negative publicity. Everyone said this guy could beat Floyd, that Floyd is a chicken. The nonbelievers, well Floyd turned them into believers.”

“(Muhammad) Ali called himself the greatest and this is my time. I am TBE (The Best Ever). I strive to be a perfectionist. TBE is not just inside the ring. I am a calculated fighter and I make smart moves outside the ring.” – Reuters