Police crack down on protesters at Israeli anti-racism march 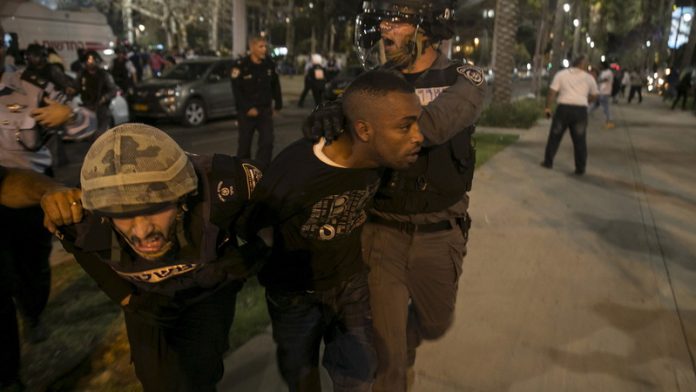 Police on horseback charged hundreds of ethnic Ethiopian citizens in central Tel Aviv on Sunday as an antiracism protest descended into one of the most violent demonstrations in Israel’s commercial capital in years.

The protesters, Israeli Jews of Ethiopian origin, were demonstrating against what they say is police brutality after the emergence last week of a video clip that showed policemen shoving and punching a black soldier.

Demonstrators overturned a police car, smashed shop windows, destroyed property and threw bottles and stones at officers in riot gear at Rabin Square in the heart of the city.

Tensions subsided after midnight and police said they would be far less accommodating of further such demonstrations.

At least 56 officers and 12 protesters were injured, some requiring hospital treatment, while 43 people were arrested, police and an ambulance service official said.

“I’ve had enough of this behaviour by the police, I just don’t trust them any more … when I see the police I spit on the ground,” one female demonstrator who was not identified told an Israeli TV channel before the mounted police charge.

“Our parents were humiliated for years. We are not prepared to wait any longer to be recognised as equal citizens. It may take a few months, but it will happen,” another demonstrator said.

Building tensions
Tens of thousands of Ethiopian Jews were airlifted to Israel in dramatic, top-secret operations in the 1980s and 1990s after a rabbinical ruling that they were direct descendants of the biblical Jewish Dan tribe.

The community, which now numbers about 135 500 out of Israel’s population of over eight-million, has long complained of discrimination, racism and poverty.

Tensions rose after an incident a week ago in a Tel Aviv suburb where a closed circuit video camera captured a scuffle between a policeman and a uniformed soldier of Ethiopian descent.

Two policemen were suspended on suspicion of using excessive force. Israeli politicians, stung by community leaders’ comparison of the incident to police violence against blacks in the United States, have tried to defuse tensions.

Call to defuse
Prime Minister Benjamin Netanyahu called for calm. Taking time out from the final days of negotiations to form a coalition government, he said he would meet Ethiopian activists and the soldier on Monday.

“All claims will be looked into but there is no place for violence and such disturbances,” he said in a statement.

Many demonstrators moved away from Rabin Square where the clashes took place, but smaller pockets of protests continued for a while in nearby streets. Earlier, ­protesters halted rush hour traffic for over an hour by blocking a major Tel Aviv highway.

Some protest organisers told Israeli media that sections of the crowd had been incited to violence despite their peaceful intentions and police said the organisers had lost control of the demonstration.

Racism and poverty
At a protest on Thursday in Jerusalem, police used water cannons to keep angry crowds away from Netanyahu’s residence and at least 13 people were injured.

Ethiopian Jews have joined the ranks of legislators and the officer corps in the country’s melting pot military but official figures show they lag behind other Israelis.

Ethiopian households earn 35% less than the national average and only half of their youth receive high school diplomas, compared with 63% for the rest of the population. – Reuters

Israel plans to force out thousands of African migrants