Doing it by the Booqe – music in transition 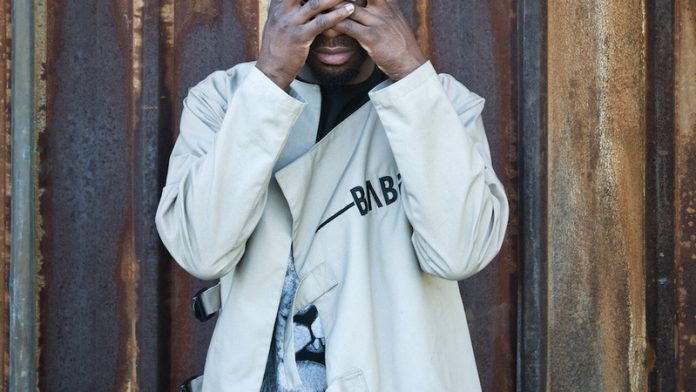 The screaming of near topless black and white girls from the front of the crowd is muffled by the overwhelming sound of a synthesiser. Clad in black jeans, a heavy dark green coat and white T-shirt, Mashayabhuqe KaMamba, or Lord Booqe as he dubs himself, is in full swing, conjuring intricate turns of phrase and working each line like a mule.

Booqe on stage, with a slightly overgrown fade hairstyle and pop-star spirals and turns, churns out the words, spilling township catchphrases over a series of neo-kwaito beats with a trap and maskandi twist. This cool-hunting urban soothsayer, born in eMandeni in central KwaZulu-Natal, has crafted a sound so cutting edge that it’s literally breaking down the South African songbook, channelling it and in turn soundtracking the panic and crisis of Mzansi’s black-urban Y generation.

“Just don’t call me a rapper,” Booqe proclaims at the start of our interview. He is used to doing things on his own terms and having the image he has so carefully crafted diluted or misunderstood by traditional media is a ­legitimate fear.

In person, Booqe is not as imposing a figure as he is on stage. Slight of build, he smiles habitually. He often dons sports gear-inspired jackets, African print finishes and an occasional sprinkling of vintage. His style, both visually and musically, is a living, breathing homage to a not so distant musical past and a future that is still in waiting. If there is something other than music that Booqe worships, it’s shoes. Sneakers, to be exact. His Instagram is a rolling feed, appreciating manufactured idols. From Air Max to vintage Jordans, his shoe fetish is defined by an acute interest in limited-edition Nikes. Crisp and clean, each one a Chinese-made polyester god – appropriate gear for the shaman of urban escapism.

Christened Ntsikelelo Christ Ndlovu, Booqe is a product of displacement. In 1997 he and his family were uprooted from their home following the death of his uncle in a political killing. Booqe and his family moved to live with his mother in Eshowe in northern KwaZulu-Natal. This eye-opening experience forced him to grow up.

“When you are that young it’s a jarring experience to go through that: you suddenly realise that you could be killed for having an opinion. But for me it also gave me strength to see the way my family processed that. It made me know that I was not alone.”

After he moved to Durban to study communication science, Booqe says that for the first time he was able to meet like-minded people who loved the arts. It was during this period that he found his musical awakening. “[Through] most of my youth in Eshowe and even back in eMandeni [I] had been defined by a need to express myself and so when I moved to the city and met a lot of young people who were on the same journey, it really opened me up and allowed me to question and explore new ideas and uncomfortable spaces and … create my own identity.”

In 2008, after visiting Johannesburg for a brief audition for a short film (which didn’t pan out) at the SABC, Booqe decided to stay.

Speaking about the evolution of his sound, Booqe falls short of using that musical cliché of calling it an organic process. “It’s really been a weird process for me over the last five to six years because I’ve never had an agenda. My primary goal has been to create … and for me that is what has kept me making music. You meet a lot of people out here who claim to be musicians who don’t actually make music but are thirsty for all the things attached to the musical lifestyle.”

Over the past two years, Booqe has been working on an increasing roster of digital hits, starting with The Black Excellence Show produced by MarazA, which was released in late 2013. Each collaboration and single that has followed since then is a well-calculated chess move in an attempt to make new rules for the way we make and consume music.

Shandarabaa Ekhelemendeh was released last year and has been downloaded more than 100?000 times. The song features friend and musical affiliate Okmalumkoolkat as he delivers, arguably, his most buoyant verse ever. Shandarabaa traverses from being a meditation on dead mothers to an ode to the libations of Saturday nights. Decoding the concept of the song, Booqe notes that it was about documenting the contradictions of life.

“There are two opposing forces that met to make that song. One is the sadness and difficulty of life and losing people you love. The other is just the will to say ‘screw it, I’m gonna be happy. I insist on enjoying myself.’”

To try to describe the morphing organism that is Booqe’s sound, you have to unearth the references that make their way into his postmodern formula. Everything from Kanye West and Shembe chants to uKhozi fm and the late Busi Mhlongo is channelled through him as he sings. He consumes it all.

As a result of that aggressive consumption, Booqe not only makes use of the internet to see his music mutate and shapeshift into new forms (a fan recently made a full video for Booqe’s Impendulo kababa and posted it on YouTube), but the music itself in its construction is also very much like the world wide web. It’s a media product whose popularity is based purely on its ability to self-mythify.

And what does Booqe mythify? The desire for access and the casual excesses of Mzansi’s black urban youth. A generation compelled to enjoy the joyride of accelerated modern life while still attempting to be rooted in so-called traditional values. Booqe is a necessary voice cutting through the noise of online blogs and mixtapes to deliver insight through the mode of music into the contradictions of being where we are right now and what exactly that means.

Digital maskandi is a genre of music steeped in paradox; a mixture of separate cultures and ideologies crossing the internet’s digital time-space continuum and running parallel to each other until they hit ears that are open enough to listen. This guy is right there in the trenches of contemporary pop culture as it happens (he works as a television producer for a popular gossip talk show as his day job), playing the dual role of receiver and signifier, lifting entire chunks of cultural references and adding them into his urban mix.

He is a digital troubadour. “I want to make music that will help people process things. That is important to me because as individuals and as a society we are going through a lot of things – socially, politically and personally that don’t make a whole lot of sense to us. Often this means I need to put myself in a vulnerable place where I reference myself and relay my own life experiences.”

This self-referencing is something he’s been doing since the very beginning of his music-making process. Most recently it is evidenced by Impendulo kababa, one of the standout singles he has dropped as a follow-up to 2013’s The Black Excellence Show. The song is set up by an opening monologue by the departed Zulu blues chanteuse Mhlongo talking about the music of her youth as a metaphor for people without land. Impendulo kababa then meanders into what at first listen is a trap beat. Thudding drums blend into a litany of maskandi strings. Booqe’s vocals are melancholic as he sings and wails through the song.

“I like singing, but I feel that for black men of my age there has become some shame attached to the idea of singing. Like singing is not masculine enough and so you need to rap. But singing for me is a functional art. It’s part of our tradition, so when I go in the booth, I feel the weight of that history.”

Through his music, Booqe is telling us that we are in transition. Even his name is a meditation on that fact. “Mashayabhuqe in isiZulu means something that finishes everything. It could mean anything from conqueror to HIV. My dad nicknamed me that, but he put a positive spin on it in the sense that I am finishing everything so that I may make space for something new.”

It’s been more than a year since Booqe dropped The Black Excellence Show. He tells me he does not have a recording deal, despite having a steadily growing and loyal fan base of yuppie followers and being lauded by international taste-maker publications such as OkayPlayer. He has received offers from both Sony Music and Native Rhythms, neither of which he has accepted. When I press him he is light on the details and instead points out that he doesn’t feel he is ready for a recording deal.

“I have put them both on hold and haven’t made a decision yet, simply because I feel like I am not where I need to be musically, so I need to work on myself,” he says. “I want to keep making music, I want to work with a Simphiwe Dana or a Thandiswa Mazwai – how that happens and what shape it takes is something I look forward to seeing.”