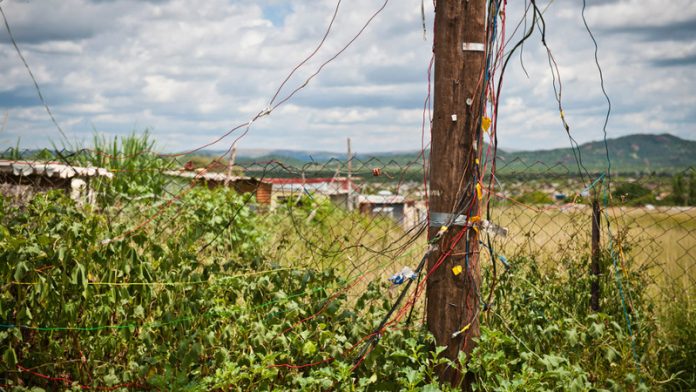 On the streets around Soweto’s Vilakazi Street the subtle signs of Orlando West’s latest power struggle are spreading like a slow tide: streetlight poles that have long lost their metallic lustre are sporting holding screws with remarkably shiny grooves.

To the expert eye those tool marks speak volumes.

“See, they’re being smart here,” says a man who, for purposes of speaking to the media, likes to go by the name of “Lumko”.

“If you leave the door off they come and weld it shut. It’s more work this way every night but over time it’s better because they don’t fight you.”

Lumko is an old campaigner from the trenches of Chiawelo, another section of Soweto, in the electricity struggle that the township has been waging for decades. It started, or so citizens hold today, as a form of resistance to apartheid in the 1980s: don’t give the oppressor your money.

It then became opportunistic during the transition: if you were not paying for electricity before and the authorities are distracted with bigger issues, why start paying now? Most recently, residents say, it has become purely economic: if there is not enough money to go around, do not spend what little you have on electricity.

A noble cause
But there are also indications that it is turning back to the political: if the government refuses to increase social grants or nationalise the mines, resistance by way of nonpayment is in service to a noble cause.

Lumko is long past caring about motivations. His job, as he sees it, is to keep his community connected to the grid, whatever it takes.

“To have electricity there are cables to bring it,” he says. “You can do what you want to, we’ll always get those cables. You can’t stop me.”

Eskom is certainly trying. Soweto owes the company a combined and cumulative R4-billion, just about enough to pay for an entire new power station. Thanks to a quirk of history the township buys its power directly from the utility, not through Johannesburg’s City Power – the only reason Johannesburg is not on the list of municipalities Eskom has threatened to cut off entirely if they do not show willingness to settle their accounts. But taking a hard line with the municipal customers who resell electricity to their citizens while proving incapable of collecting from end users yourself is as uncomfortable morally as it is ruinous financially.

Evolved approach
Over the years the Eskom approach has evolved, but Lumko and his fellows have always been just one step behind.

Eskom first just disconnected nonpaying households from the local grid, Lumko says. “They left the wires there, just capped them.” It took 30 seconds to reconnect each household under the cover of darkness.

Orlando East residents took to the streets to protest against the Eskom prepaid meters that were recently installed.  (Oupa Nkosi, M&G)

Next came the prepaid meters. “You strip the wires on one side [of the meter], you strip the wires on the other side of the meter, and the meter doesn’t clock,” Lumko says. As an added bonus he created a bag of carefully sliced wire insulators that, once the bridging wire was removed, would camouflage the modification. “If the police came you needed maybe two minutes and they would not know anything.”

Eskom upped the ante with high-security boxes to house vulnerable points of connection. Lumko says he did not come up with the solution, but helped to perfect it: carefully cut triangular holes in just the right spot to access the wires again.

In Orlando West there is some concern about criminal sanction if modifications are discovered, hence the use of streetlight poles, in a trick long beloved in informal settlements close to major, lit roads.

“You can draw a lot of power from a streetlight; run your house no problem,” Lumko says.

Work when needed
The wires running up the light poles are not live during daylight hours, when the lights are off, but you do not want to have your wires connected when they can be seen anyway. Also, the lights work exactly when people need power.

“In Soweto we go to work early in the morning,” he says. “You run your wire in the night, you charge everything, you cook, you sleep, you cook breakfast, you take your wire down.”

It becomes part of the daily routine. And Lumko has a large supply of black electrical wires that are very hard to spot after the sun has set. Using two black wires for both positive and negative connections does not exactly comply with electrical standards, but the power “doesn’t worry what colour the wire is. They’re not racist, our wires.”

It’s not the best joke in the world, but those who use Lumko’s services as a consulting power thief still crack up every time he uses it.

With renewed protests in Orlando West, as residents demand to pay a flat rate every month for their electricity, Lumko expects more police raids, new technologies, and the use of local informers to catch thieves. But he is already planning his next strategy. With a little money he can hire a vertical drill that can create a subterranean cable network without even disturbing the top layer of soil. As long as entire streets co-operate it would be hellishly difficult to detect the theft, he believes.

“Now this struggle of ours, it goes underground,” he quips. It is his new favourite joke.

The opportunities boggle the mind

In his state of the city address on Wednesday, Johannesburg mayor Parks Tau announced initiatives ranging from the obscure to the obvious. Some are geared to address long-standing political problems, others to capture the imagination.

Vulindlel’ eJozi
A youth employment scheme that will screen young people for aptitude and skills, and channel them accordingly – some for basic literacy and numeracy training, others for employment in the formal sector or public works programmes, or for training in entrepreneurship. By 2016, the scheme is likely to “break down barriers to opportunities” for 200 000 people.

[email protected]
An existing Johannesburg initiative that Tau said “is now a reality on the ground”, [email protected] channels municipal services to local providers, ideally micro-enterprises, capable of doing anything from gardening in parks to installing solar water heaters.  Tau described it as a movement “mobilising the economically excluded to take their power back”. The opposition describes it as paying citizens to do jobs that should be done by council staff.

Digital literacy training
In addition to blanketing Braamfontein in free wi-fi, and rolling out more hotspots at council-owned sites such as bus stations, Tau promised that 3 000 young people would act as “digital ambassadors” to teach citizens how to use online services.

Unlikely foods
Johannesburg is leaning on fast-food outlets to provide more healthy menus, but is also getting its own hands dirty in the food business. The city was “looking at options” to turn fruit trimmings into flour for use in making bread, Tau said, as well as supporting micro mushroom farms.

Less water
With much of the city’s water piped from faraway Lesotho, Johannesburg has now reached “equilibrium point between demand and supply”, Tau said. With the population growth not slacking off noticeably, the city plans to use both the carrot and stick, with the intention to “incentivise and regulate” low-water-usage flushing toilets and water-saving urinals.

Off-the-wall energy sources
Johannesburg would send organic waste to biodigesters to manufacture fuel, Tau said, and would use turbines in water pipelines to harvest energy from the water flowing through them.

Paper from rubble
Illegally dumped building rubble is a significant problem for the council. To subsidise its removal, Tau said, the city would crush it and turn it “into a new form of stone paper”.

Better roads, no tolls
In light of the ongoing disaster in the implementation of the open-road freeway tolling in Johannesburg, Tau emphasised that the city’s roads would be improved but without being tolled. The major arterial roads would be assessed soon for upgrading, he said. “This will be e-toll quality roads without e-tolls,” he said.