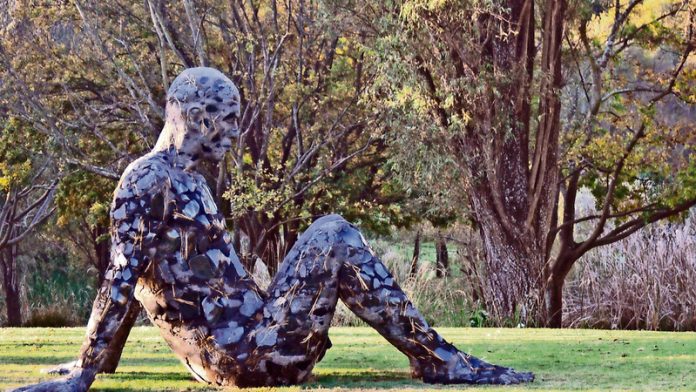 An enormous dark man grabs your eyes as you enter the Nirox Sculpture Garden in Mogale City, in the Cradle of Humankind. He sits, knees drawn up, eyes closed. He is made from rammed earth by Angus Taylor; if you were at last year’s Winter Sculpture Fair, you will remember him. As you look at him, you fantasise about him opening his eyes and standing up. He would dwarf the world with his beauty.

Weighing four tonnes, he contradicts the fair’s policy to show only new work each year: he cannot be moved. But his beauty overrides everything – this is the magic that the Winter Sculpture Fair promises. Does it deliver? You need sturdy walking shoes to find out. It opens this weekend.

Sculpture and performance are related. If you’re a child and there’s an object that can be climbed, you will. If you’re grown up, you are aware of how a sculpture has an ergonomic relationship with you.

But how does it relate to buyers? People buy paintings for their homes, but do they buy sculptures? Given the prices – reaching into the R500?000s or more for some – it’s a curious issue.

None of the works at this fair are what you might buy on a whim. Or are they?

“People fall in love with things and decide that they must have them,” says Mary-Jane Darroll, the fair’s curator who has worked for 20 years in galleries and auctioning houses. She is collaborating this year with curator Beathur Mgoza Baker in developing new art audiences in South Africa, but has worked with Nirox’s Benji Liebmann since the fair’s inception three years ago.

The fair grew out of a Dutch-sponsored Rainbow Nation exhibition in 2012, she explains. “Each exhibition takes about a year to put together. We work with the artist from the idea’s inception to the proposal’s practicalities, working out the niggly technical things, and going into the execution.”

Sculptures need to be placed “just so”.

“If an artist is working for a white cube space, the work could go in any white cube space. But if you think about a site-specific conceptual piece – such as Sean Slemon’s Face the Sun, which is informed by how the sun shines – it’s such a huge piece of steel, yet it is so esoteric in how it deals with its environment and that notion of a still, heavy thing that really interacts with the space it’s in.”

This year there are 35 exhibitors and 110 works. It’s the fewest artists in the fair’s three years.

“We wanted more focus,” says Darroll. “As artists become used to the huge landscape – when you put a work out there it almost disappears – they take on more ambitious projects. It is a growth process.

“The buyers are generally South Africans,” she adds, mentioning a need for a “large purse” if you are a sculptor with big ideas, let alone an investor with a large lawn.

It’s a reality that some of this year’s fair’s most powerful pieces seem to be relics from last year. There’s an achingly fine sculpture of a ­pregnant woman by Capetonian Di Heller. She’s a haunting figure built with interruptions in her texture and she holds a little broken bird in her hand.

Sculpture and performance relate to one another: Nirox and the Nelson Mandela Children’s Fund are partnering in “foresting” Taylor’s mud man by enabling the public to place sponsored twigs into its surface. The proceeds of this gesture will go to a children’s hospital.

But further to this give and take, Cape Town-based Mohau Modisakeng, better known as a performance artist, has made a throne for the fair. Essentially a pair of Benin-evocative fibreglass leopards, the work implies the presence of a human body – or that of a god.

The monster 15-hectare space of the sculpture garden is eerily still and carefully manicured. Darroll knows this terrain like the back of her hand, and adds that its maintenance is labour-intensive.

On paper this initiative is a godsend for South African sculpture. But challenges surround your experience: for one thing, the road is not clearly signposted – my GPS misled me to a private farm. Once you arrive, there’s a great deal of walking because the works are littered throughout the space, some more in conflation with the environment than others. And the fair’s website is inconsistent.

This year’s fair is also bruised by conceptual works. Marcus Neustetter’s series Of Rockets and Space Junk offers the illusion of detritus from the sky. But when you see the pieces individually, you get bored. It might be difficult to ignite enthusiasm to walk more and see other broken things.

Then there’s Ruann Coleman’s Pole?1. A piece of metal resembling scaffolding, painted hot pink, this piece asks R68?000. You might look at this in the light of Coleman’s pared-down aesthetic, but you also might consider it an offensive aberration in this garden, which was once a trout farm.

Willem Boshoff’s Granite Couple is another case in point. On paper, the polished Belfast black granite speaks of a sacred space. When you reach it, the work is drenched in ­sterility.

Next weekend, the garden will be full of sculpture lovers and young families. Darroll laughs: “A sculpture’s yardstick is how children respond to it.”

She mentions ­Bronwyn Lace’s work, Sympathetic Resonance, suspended in a tree. “When first they saw it, people went wild about it. There was concern that it would be damaged, but we want participation. This is no museum.”

Indeed not. As South Africa’s only purpose-built sculpture garden, it should be celebrated. Is it trying to emulate European sculpture gardens? Maybe. But perhaps the gesture of arts patronage in this way should be what you hold on to and the reason you don your sturdy shoes.

The Winter Sculpture Fair at Nirox Sculpture Garden in Mogale City launches on May 9 and 10 and is open free to the public on weekends, 10am to 4pm, until July 26. wintersculpturefair.co.za