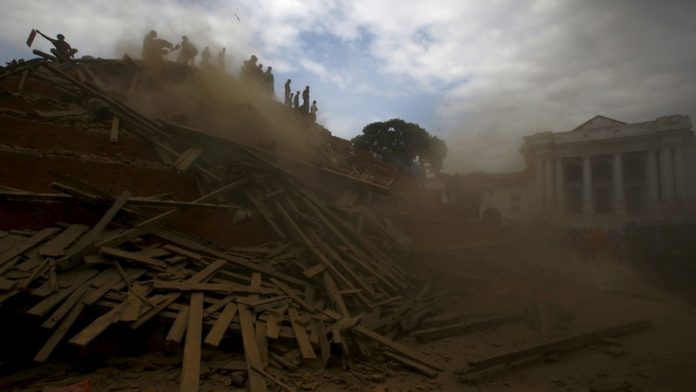 The US Geological Survey said Tuesday’s earthquake had a magnitude of 7.4 and struck 68km west of the town of Namche Bazar, close to Mount Everest and the border with Tibet. It was felt as far apart as New Delhi and Dhaka, the capital of Bangladesh.

Residents in the Indian town of Siliguri, near the border with Nepal, said chunks of concrete fell off one or two buildings.

Four people were killed in the latest earthquake, which destroyed several buildings, a spokesperson for the International Organisation for Migration said.

“The situation in Chautara is that several buildings in the town have collapsed,” spokesperson Paul Dillon told Reuters by telephone from Kathmandu. “There are four fatalities.”

Parents could be seen clutching children tightly and hundreds of people were frantically trying to call relatives on their mobile phones. Shopkeepers closed their shops and the streets were jammed with people rushing to check on their families.

“I’m heading straight home,” said Bishal Rai, a man in his 20s, who said he was trying to contact his family in the north of the capital.

The quake’s epicentre was close to Everest Base Camp, which was evacuated after an avalanche triggered by last month’s quake killed 18 climbers. Mountaineers seeking to scale the world’s tallest peak have called off this year’s Everest season.

Last month’s quake killed at least 8 046 people and injured more than 17 800. It was recorded at 7.8 magnitude, almost four times stronger than Tuesday’s quake.

But a 7.4 magnitude earthquake has the potential to cause significant damage and landslides. – Reuters