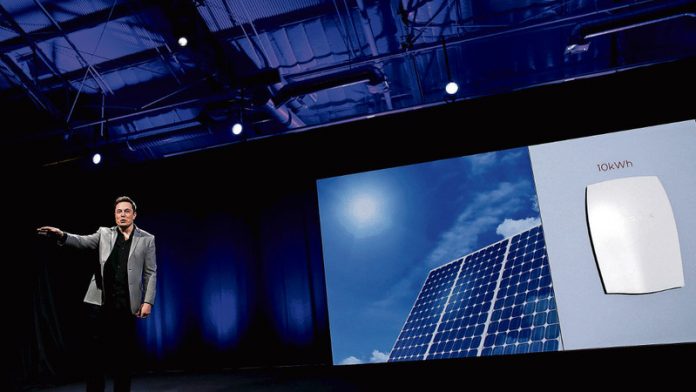 Elon Musk’s Tesla Powerwall batteries have captured the imagination of the world, most notably for the economy of scale that they represent for energy storage.

The promise that the slick, lithium-ion battery units hold for countries like South Africa may be some way off, according to local energy experts.

Nevertheless the Powerwall appears to be doing for batteries what Tesla did for electric cars – taking an old idea and injecting new life into it. The batteries address some of the traditional arguments made against renewable energy technologies, such as their variability. They are being marketed as the solution to store energy for solar power users, who need to bridge the gap between the sunniest hours of the day, or solar peak, and evening demand.

The company is already taking reservations for the units, launched at the beginning of the month, and has so far reportedly racked up pre-orders of an estimated $800-million.

According to Bloomberg Business, interest has been driven by businesses and utilities, which are queuing up to get their hands on the larger battery units that come in 100 kilowatt/hour (kWh) battery blocks. The news agency estimated that the pre-orders had reached $625-million.

According to Tesla, major firms such as the online giant Amazon and the United States retailer Target are on board. Amazon is rolling out a 48 megawatt (MW) pilot plant at its northern Californian operations and Target will be piloting the use of the batteries at a number of its stores.

Large utilities such as Southern California Edison believe the Powerwall has promise and has partnered with Tesla at three demonstration plants.

The domestic Powerwall comes in two sizes – a 7.5kWh model and a 10kWh model, for $3 000 and $3 500 respectively. This does not include the cost of installation and an inverter.

Although South Africa is facing debilitating load-shedding, and many households and businesses are looking for ways to reduce their dependency on Eskom, Tesla’s product may not be the solution to their problems just yet.

Unheard-of warranty
Professor Wikus van Niekerk, the director of the Centre for Renewable and Sustainable Energy Studies at Stellenbosch University, said media hype about the battery was a bit of a storm in a teacup. The Powerwall batteries are not significantly cheaper than deep-cycle lead-acid batteries that, until now, have been the most common way to store energy. But, typically, lead-acid batteries have a shorter lifespan and are much larger to house.

What make Tesla’s units more attractive, he said, is that they are more efficient and have a 10-year warranty. The Powerwall was a step towards more reliable and affordable battery storage rather than an answer to common criticisms of renewable energy.

But the batteries would make more sense in countries such as the United States and in some European countries. They have time-of-use tariffs, and consumers could buy electricity when the tariffs are lower and store it for use when electricity is more expensive, Van Niekerk said.

“This, and storage for PV [photovoltaic], is what may sell Tesla Powerwalls in the US and Europe, but probably not here, at least not in large numbers,” he said.

Mark Bleloch, of BrightHouse Solar, said the Powerwall might appeal to homeowners with solar-PV installations but it would not be available in South Africa for at least a year, and it does not yet make commercial sense, even for larger domestic users.

He has been involved in the small-scale embedded generator programme run by the City of Cape Town that allows domestic users to generate their own power and sell the excess to the metro.

“It’s a breakthrough not in technology but in scaling production, improving engineering, quality of materials and thus price and performance,” Bleloch said, adding that the unconditional 10-year guarantee was unheard of.

In South Africa battery storage did not make financial sense, he said. By his calculations, based on Tesla’s specifications, every kWh of electricity stored would cost an additional R1.20.

If that power came from solar panels, which had a typical levelised cost of R1.25 a kWh, then the total cost of electricity would be R2.45.

It could be even higher. Tesla claimed an 8% electricity loss when charging and discharging the battery but, Bleloch said, that could be conservative. Until local electricity prices breached the R2.70 per kWh level, the Powerwall did not make financial sense.

But the frequent power outages could be having such a negative effect on businesses and nonresidential consumers that they would be willing to pay more for electricity and continuity of supply, he said.

Bleloch did not advocate going off the grid or investing in a hybrid system unless grid availability continued to deteriorate and load-shedding became a daily event and for longer than two hours – or if the price of the Powerwall dropped, or if electricity prices rose substantially.

Eskom has applied to the National Energy Regulator for a 25% increase in tariffs.

Bleloch added that wiring standards for off-grid homes that used solar PV and storage and hybrid systems were not yet in place.

Save instead
He said that currently it made more sense for households to understand their electricity usage and to implement savings, such as installing LED lighting, a heat pump or solar water heating, insulation and energy-efficient appliances.

Only after taking those steps should consumers consider grid-tied solar PV systems and, where applicable, be approved as small-scale embedded generators linked to programmes such as Cape Town’s.

“We should not lose sight of energy efficiency, ‘the never watts’, and behavioural changes to save energy,” Bleloch said. “Money well spent in this area is by far the most effective.”

South Africans were also limited by the slow move to a smart grid and the implementation of real-time electricity tariffs.

“However, Elon Musk has taken the leap that will start the learning curve and volumes to bring down the cost of storage dramatically, in the same way that volumes and engineering brought down the cost of solar panels by 70% in the last four years,” Bleloch said.

Renewable energy could help developing nations to leapfrog some of their power constraints, notably by reducing the need for central electricity networks.

In this respect, the Powerwall was “a game changer”, especially for people who lived in remote areas where there was no electricity grid, and might never be, said Ken Ozoemena, chief scientist and the research group leader of electrochemical energy technologies at the Council for Scientific and Industrial Research (CSIR).

But more effort was needed to make it more widely available and cheaper, he said. This could be achieved as different types of the lithium-ion batteries emerged, he said, similar to the development seen in cellphones.

The CSIR, in its own lithium-ion battery research and development, was focusing on using manganese, which was abundant in South Africa, Ozoemena added.