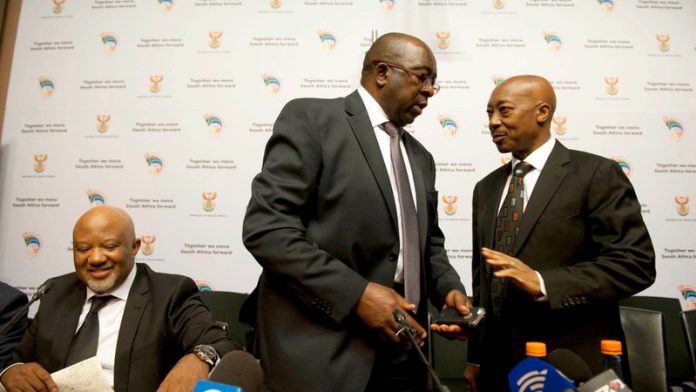 The unit was shut down by new Sars commissioner Tom Moyane in December last year after the report of the Sikhakhane panel of inquiry, which accused the alleged “rogue” unit of illegal intelligence gathering.

The unit, never more than 30 strong, was set up in 2007 to assist Sars with high-risk tax, customs and smuggling investigations.

Up to now, no instance of illegal surveillance has been demonstrated, although both advocate Muzi Sikhakhane and an advisory panel appointed by Finance Minister Nhlanhla Nene have argued that the unit’s undercover character rendered its operations illegal.

Sensitive footage
Now amaBhungane has established that during 2007 the initial commander of the unit, Andries “Skollie” van Rensburg, secretly procured highly sensitive video and audio footage from inside the Scorpions’ Pretoria headquarters.

The existence of spying has been confirmed by a number of sources both inside and outside Sars – and at least one of whom has direct knowledge, whereas others were briefed on the events. None was prepared to be named.

Van Rensburg, who resigned in early 2008 when Van Loggerenberg took over management of the unit, failed to respond to a detailed request for comment.

The material Van Rensburg gathered was sifted for information relating to the two politically explosive Scorpions investigations – the Zuma corruption case and the probe of then police commissioner Jackie Selebi.

Transcripts of recorded conversations of National Prosecuting Authority (NPA) staff were provided to deputy commissioner Pillay, to whom Van Rensburg reported at that time.

Bitterly divided
According to one source familiar with the events, Pillay is understood to have passed the transcripts on to a state agency, believed to be the police crime intelligence division.

At the time, the NPA and the police were bitterly divided about the Selebi investigation – and crime intelligence was already trying to spy on the NPA and the Scorpions, who were accused of pursuing an agenda to undermine the ANC government.

Pillay, who resigned last week after a settlement brokered through high-level political intervention, declined to comment.

Access to surveillance tapes came about through a Trojan Horse in the Scorpions’ own security arrangements, according to an account provided to amaBhungane.

Van Rensburg, a former intelligence operative, was tipped off about a security company contracted by the Scorpions to install in-house CCTV cameras.

It appears that the Scorpions required this because they suspected internal leaks and wanted to monitor access to offices and documents.

Great tension
That was a time of great tension between various arms of the security services, including Sars, which had come under intense pressure from the Scorpions to provide taxpayer information and approve criminal tax prosecutions in highly politicised cases, such as that of Zuma, his financial adviser Schabir Shaik and ANC stalwart Mac Maharaj.

By 2007, the Scorpions were also viewed as “playing politics” in relation to the Zuma and Selebi investigations, which were associated with the Zuma and Thabo Mbeki factions respectively.

Van Rensburg is said to have regularly obtained copies of the NPA security tapes. The knowledge and transcription of the material was restricted to a handful of people.

One source close to the events said Van Rensburg had told senior colleagues in the unit that he had “approval by Zuma” for this action and that copies of such approval were lodged “with his [Van Rensburg’s] lawyers”.

There is no evidence of such approval – or that Zuma was aware of the spying carried out in his name.

However, the “spy tapes” – interceptions of the telephone conversations of senior members of the NPA, including Scorpions boss Leonard McCarthy – were later leaked to Zuma’s attorney, Michael Hulley, and led to the withdrawal of corruption charges against Zuma in 2009.

Highly embarrassing material
At that time both a senior crime intelligence officer and a member of Zuma’s entourage indicated to amaBhungane they had knowledge of material that came from surveillance inside the Silverton offices of the NPA, not just from telephone intercepts. It was suggested that some of the material would be highly embarrassing to members of the NPA and included evidence of sexual escapades.

It is uncertain whether this was the same CCTV material obtained by members of the Sars unit.

Hulley referred questions to the president’s spokesperson, Harold Maloka, who did not respond by the time of going to print.

One source, who was only recently briefed on the matter, suggested the material was “voluminous and very damaging to the Scorpions”. Another source said the material he was personally aware of had no bearing on the Zuma case and did not disclose abuses in the prosecution.

A source sympathetic to Pillay said Sars came into possession of the information “informally” from intelligence sources, not from a Sars operation.

He said the information was handed over to law enforcement, as required by law, and was not disclosed to any politicians or their representatives.

‘Erratic’ behaviour
It is understood that access to the footage was terminated towards the end of 2007 because Van Rensburg’s behaviour had allegedly become erratic. At the time he suffered a multiple family tragedy, which played a role in the February 2008 decision to pay him out for the rest of his contract.

Van Loggerenberg took over the management of the unit and set out “rules of play” that emphasised operations must be carried out within the law.

The fact of the Scorpions surveillance remained a closely guarded secret until recently.

According to one source, a team of forensic investigators from KPMG, appointed by Moyane to probe the activities of the unit, picked up references to it when combing through copies of the computer hard drives of unit members.

It is understood they came across a reference to “Skollie” having claimed “approval by Zuma” for activities referred to as what happened on “Sunday nights”.

It is speculated that this referred to when copies of CCTV footage of the Scorpions offices were copied or processed.

When contacted for comment Sars said it “takes your allegations very seriously. However, we do not wish to respond to these allegations, especially when it is clear that your sources cannot be credible.”