Spain’s ‘we can’ party finds it can’t 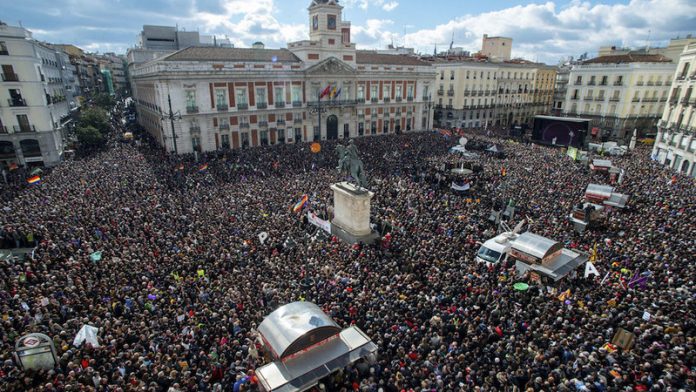 “The general feeling, I believe, was that Podemos had stalled,” says Juan Carlos Monedero after a long pause. The cofounder of Spain’s anti-austerity party speaks slowly, choosing his words with care as he explains his reasons for stepping down from the leadership last month.

“You would see Podemos folks on television and, before they opened their mouths, you knew what they were going to say. That’s the worst thing that can happen to a political force dedicated to transformation.”

Just 12 months ago, the 52-year-old was crisscrossing Spain, helping to set up circulos (working groups) for what was fast becoming one of Europe’s most thrilling political projects. At the start of this year Podemos, which means “We can”, was leading the polls, fuelled by the anger and frustration that had filled Spain’s public squares with indignados (the indignants) in 2011. In January more than 100 000 people gathered in Madrid to rally against austerity in a show of force for the party as it marked its first anniversary. Podemos’s leader Pablo Iglesias vowed: “2015 will be the year of change in Spain and Europe.”

Now, however, that prediction seems doubtful. With days left until Spaniards cast their votes for the leaders of 13 regions and some 8 000 mayors, the party’s campaign is sharing space with a vigorous debate among Podemos supporters about whether the party is heading down the right path.

Polling lead eroded
Podemos’s polling lead has been eroded in recent months, leaving the party nationally in a virtual tie with the governing People’s Party, the Socialists and right-of-centre Ciudadanos. A poll carried out between March and April for the state-sponsored Centre for Sociological Investigations suggested that in the regional elections, far from doing away with Spain’s bipartisan political system, Podemos will come in third or fourth place in most regions, whereas the People’s Party and the Socialists would vie to lead minority governments.

The polls could be wrong, of course, and do not include the views of the many undecided voters. But Monedero, a political science professor who has become the most prominent voice in the debate about Podemos’s future, argues that one cannot rule out the possibility that the party that turned Spanish politics on its head is now facing fallout from what he called “big mistakes” made in recent months. “Podemos has begun to look like the ones that they want to replace,” he says.

To Monedero, Podemos was born with two souls, a party attempting an unwieldy merger of party politics and political marketing with the social indignation and anti-establishment sentiment of its working groups. “The problem is that we only dedicated ourselves to the first part and forgot about the second,” he adds.

The working groups – credited as the backbone that enabled Podemos to capture 1.2-million votes in last year’s European elections on a bareboned budget – fell to the bottom of the list of priorities as the urgency of the ballot box loomed, says Monedero. “A minute of television airtime became more important than meeting with the working groups,” he says.

In the hands of mass media the party’s message of transformation has derailed easily. A case in point came earlier this year, when Monedero confirmed that he had been paid some €425 000 for advisory work for the governments of Venezuela, Ecuador, Bolivia and Nicaragua in 2013 but had only recently correctly settled the taxes owing. Even coverage of the first song composed for Podemos turned negative, when Iglesias made no secret of his disdain for it. “We can’t do everything well in Podemos and that tune doesn’t excite me,” he told Galicia’s V Television.

Monedero says that, as the fourth anniversary of the indignados movement drew near, he felt compelled to speak out. “For me, this is a deep-rooted problem. We run the risk of losing this window of opportunity that was opened by the indignados.”

His comments come as Podemos’s most recent policy proposals suggest a shift to the centre, backing down from previous promises to suspend home evictions and guaranteed minimum incomes. Earlier the party did away with plans to declare a moratorium on Spain’s public debt and reduce the retirement age from 65 to 60.

Given up on a number of issues
The party is clearly gambling on capturing more votes in the centre, according to José Ignacio Torreblanca, author of Asaltar los Cielos, or Storm the Heavens, a new book exploring the rise of Podemos. “If you compare the programmes of United Left with Podemos, it’s quite evident that Podemos has given up on a number of issues that are the traditional banners of the left,” he says, pointing to public subsidies for private schools and historical memory laws. “Clearly they’re aiming to move into the territory of the Socialists, the middle class and people who do not care about being very left.”

Not everyone sees the changes in Podemos as necessarily being for the worse. Party member José Ignacio García Sánchez says Monedero’s resignation lifted the lid on a long-simmering issue, and the party’s stagnation in the polls paradoxically opened a space for debate that had been silenced by its meteoric rise. “I think that its something that we can correct and it is being corrected,” he says.

The changes were logical, he says, given that the party grew from an idea to a full-fledged political contender in a matter of months, rushing through a process that their political rivals had been undertaking for decades. “When we started, most working groups were small, made up mostly of activists or people with experience in social movements.”

Still, it is a model that has worked for the party in many ways, says Luke Stobart, a Podemos supporter and writer who has tracked the party closely. “In many respects its been a model which has been successful – it has helped to build massive electoral support and encourage quite passionate responses from ordinary people,” he says. “But the problem is that at the same time it eroded precisely what also made people excited about the project – the fact that this was actually a project controlled and shaped by people.”

The consequences were captured in the party’s stagnant polling numbers, says Stobart. Although the shortcomings of the party’s anti-austerity ally Syriza in Greece may have had an effect, he discounts those who blame the rise of Ciudadanos. “If you look at the sociological studies, it’s quite clear that Podemos is losing more support among people who self-identify as being the most left and is losing very little support in people who describe themselves as more centrist.”

A decisive year
It’s a trend hinted at by participation rates in Podemos’s primaries, with about 20% of members casting a vote in the March primaries for regional candidates as compared with the 43% who took part in the November ballot that saw Iglesias voted in as secretary general.

Stobart points to the municipal campaigns where, rather than running its own candidates, Podemos has opened itself to backing coalitions. In Madrid, the Ahora Madrid coalition is ranked second in the polls, and Barcelona en Comú has a strong chance of winning the mayoral elections of Barcelona.

“There’s an argument that these campaigns have been more successful than those of Podemos by itself, perhaps because they more reflect the kind of spirit that we saw in the squares in 2011,” says Stobart.

As Podemos readies itself for regional and municipal elections – the next leg of a decisive year in Spanish politics – Monedero says his criticisms stem from a desire to help the party rather than hinder it. Although Iglesias has publicly denied toning down the party’s proposals to attract more voters and insists that the debate brought into the spotlight by Monedero is not a crisis for the party, Monedero says he is confident that his message has come across.

“Podemos is the only tool that the Spanish democracy has to recuperate its path. I sincerely believe it,” he says. “We have to take care of it.” – © Guardian News & Media 2015

South Africa is working towards establishing a publicly-funded universal health service and now, amid the coronavirus pandemic, is the time to implement it
Read more
Advertising
Continue to the category
Politics