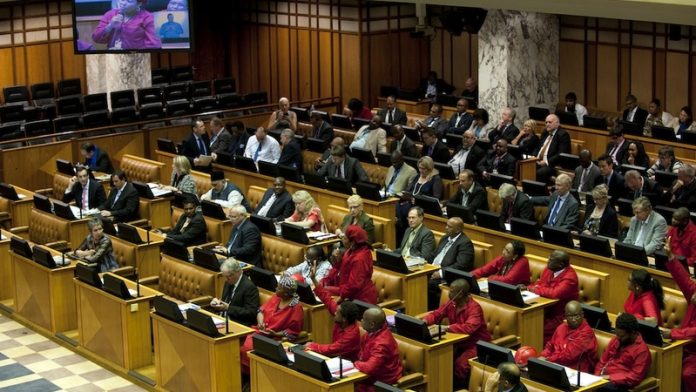 Profanities, a silent protest, name calling and a date for the release of the Marikana report took centre stage during the tabling of the presidency’s budget vote in Parliament on Tuesday.

With the Economic Freedom Fighters waving placards saying “Release Marikana Report” during President Jacob Zuma and Deputy President Cyril Ramaphosa’s addresses and calling for a date and time and the Democratic Alliance calling the withholding of the report a cheapening of black lives, the report seems to have temporarily replaced the “Pay back the money” chants, for now.

Zuma, tabling his budget vote speech, said he knew and appreciated the anxiety of those affected by the Marikana massacre.

“However, it would be inappropriate for me to just release the report without applying my mind sufficiently. The report will be released before the end of next month.”

DA leader Mmusi Maimane said every minute that passed without the report being made public cheapened the lives of those who had died at Marikana.

“The miners, their families, the lives of all South Africans are diminished by the president’s delay. We have just celebrated Africa Day, Mr President. But by withholding this report you are telling us that the lives of black workers are cheap. Honourable president, I believe that black lives, like all lives, matter. If we are to take our place among the world’s successful nations, we must send out a signal that all are equal before the law.

“The Marikana tragedy shows just how the president and his cronies have protected themselves at the expense of the poor,” said Maimane.  He said those responsible for the atrocities at Marikana should be fired and jailed.

“So why, Mr President, have you not released the Marikana report? The report belongs to all South Africans, it is not yours to do what you like with. Your delay makes us wonder, which members of your inner circle you are trying to protect. Tell us, Mr President, whose reputations matter more than the lives lost at Marikana? Is it Deputy President Cyril Ramaphosa, who chose his words carefully but deliberately when he called for “concomitant action” to bring the strike to an end in order to protect his personal interest in the mine?

“Or former police minister Nathi Mthethwa and national police commissioner Riah Phiyega, who allegedly acted under political pressure and wielded their influence to subdue the miners using any means necessary? These questions demand answers. We can never bring those miners back, but we can help their families get some closure. And we can get to the truth,” he said.

EFF MP Hlengiwe Maxon said they wanted to promote justice and not thievery. “Why have you not released the Marikana report? The Marikana workers gave you a simple task, to release the report by yesterday, but you failed again. You always fail the nation, Mr President.

“We know you won’t do that because the report implicates some of your friends in the presidency, who were involved in killing the workers in Marikana. You are probably busy cooking it. Release the report, because surely your mind, which can’t count, is not better than that of the judge. The only applying mind we need is a date and time of the releasing of the report,” said Maxon.

EFF spokesperson and MP Mbuyiseni Ndlozi said, referring to the president as sick and the release of the Marikana report as the only cure,  it was Zuma’s government that sent police to Marikana.

“To shoot and massacre 34 black people who were only asking for a living wage. Only sick people would accept rulings that seek to suppress the truth that the ANC government massacred workers in Marikana. So Mr President, you must release the report. We want to know how they died. If you are looking for a cure, release the Marikana report. Give us a date and time. There is a date as to when they were killed, there is a time for when they died. The most honourable thing to do is not to come here and talk about next month,” said Ndlozi.

Rejecting the president’s budget, Maxon said it promoted accountability based on gluttony.

“In the past three years, you have always asked for more money that you need Mr President. What is worrying is that in one year, you were supposed to spend R4-million on food, and yet you spend R23-million on food. This is what Zakes Mda would call a mother of all eating, it means you are a master chef of wasteful expenditure. None of this is in line the containment measures that everyone is instructed to implement by the national treasurer.

“This, however, is not a surprise. You have not led by example. You continue to ask for more. Your excessive appetite for public funds, characterised under fruitless and wasteful expenditure and increases well over inflation.

“You are asking us to promote stealing and greed, because the presidency is a thief of departments.”

Praise for Zuma
Praising the presidency for its work, ANC deputy chief whip Doris Dlakude said the ANC remained committed to the deeply entrenched values underpinned by the Freedom Charter.  With DA MP’s talking throughout her speech, Dlakude said she would not respond to howlers whose whole policies were Zuma, Nkandla and corruption.

With EFF and DA MPs howling throughout his address, the president said the country continued to make steady progress in consolidating democracy and in expanding access to important social services such as water, sanitation, quality education, quality healthcare, housing, science and technology, food security, social security and various others. “Progress is also being made in the fight against crime and in promoting inclusive economic growth and job creation.”

Deputy President Ramaphosa said if the country was to appreciate how far it has come, “and if we are to understand where we are going, we need to examine the evidence over a number of years.

“Many of our people have been lifted out of poverty. These trend lines tell the story of a nation determined to overcome a past of division, lack of opportunity and conflict – a nation working to build a future of equality, prosperity and goodwill. We are not on a slippery slope, as some right-leaning people on my left would have us believe,” said Ramaphosa, referring to the DA.  He said the country was on an upward slope, and was steadily making progress.

Foul-mouthed MPs
Later in the afternoon, during Deputy Minister of Trade and Industry Mzwandile Masina’s address, DA chief whip John Steenhuisen accused him of mouthing “I am going to fuck you up” to one of his MPs during the heckling.

With the DA MPs and the deputy minister referring to each other as spineless and cowardly, presiding officer Thoko Didiza promised to look into the allegations as she did not hear the minister swearing.

Responding to deputy minister Masina, who referred to Ndlozi as Mr Parliament, the EFF spokesperson said: “If [Minister Mzwandile] thinks I am Mr Parliament, he should know that we are not only better looking than him, we are better in everything and anything he can imagine. Perhaps when President Jacob Zuma looks at us, he wishes he had us in his cabinet, because at least we do not suffer the Nyaope delinquent speech diarrhoea characterised by his political inarticulation. We are self-made. We just bought it affiliated. We build it ground up.”