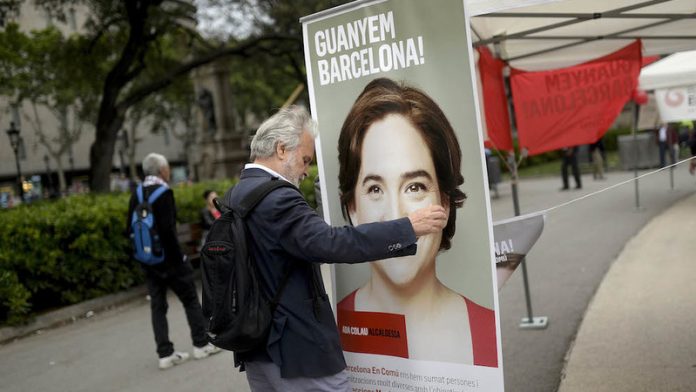 Spain’s indignados made the move from city squares to the halls of power on Sunday in municipal and regional elections that saw an anti-poverty activist elected as mayor of Barcelona and the ruling right-wing People’s Party (PP) battered at the ballot box.

Ada Colau, the 41-year-old anti-eviction activist who leads Barcelona en Comú, was elected mayor of the Catalan city. “It’s a victory for David over Goliath,” said Colau as news broke of the historical win.

A grass-roots movement of several leftist political parties, including Podemos, and thousands of citizens, Barcelona en Comú (Catalan for “Barcelona in Common”), vowed to return decision-making in the city to the people, promising to do away with home evictions, increase public housing and redistribute the city’s wealth. Colau’s party won 11 of the 41 seats on the city council, meaning that she will need to form alliances in order to govern.

The strong showing of the leftist coalitions in Madrid and Barcelona suggest that the agendas of Spain’s two largest cities will be driven by the priorities of anti-establishment parties with roots in Spain’s indignado movement.

With general elections due by the end of the year, Sunday’s elections in 13 regions and more than 8 100 municipalities were widely seen as a chance to test the mood of Spanish voters. The message that emerged was clear, with Spaniards voting to end the two-party dominance that has characterised Spanish politics since the death of Franco. With 90% of the vote counted in Sunday’s elections, the PP and the Socialists had taken 52% of the nationwide vote, a significant drop from the 65% the two mainstream parties earned in elections four years ago.

Although the PP received the most votes in nine regions, it failed to obtain any absolute regional majorities. Many voters, unconvinced by the party’s message of an economic rebound and fed up with austerity, sky-high unemployment and corruption scandals, turned instead to anti-austerity party Podemos and centre-right Ciudadanos.

The national newcomers came in third or fourth place in most regions, suggesting they will hold the balance of power in many regional governments. “We would have liked the decline of the old parties to have been quicker,” said Podemos’s Pablo Iglesias, “but circumstances compel us to keep working on it.”

As Spanish politics widens into a four-way race, the shifting landscape means coalitions and compromises between parties will be necessary to govern. The process will get underway in the coming weeks, and negotiations could be months in the making.

Battling the most visible crisis scars
Colau, as one of the founders of the Plataforma de Afectados por la Hipoteca (Mortgage Victims’ Platform), has spent the past six years battling the most visible scars of Spain’s economic crisis, from growing inequality to home evictions, before standing as mayor under the Barcelona en Comú banner.

Crowdfunded and guided by a code of ethics drawn up by its members, the group promises to focus on job creation, combat growing inequality in the city and usher in a culture of transparency and anti-corruption in the city’s institutions.

“We want to show that you can do politics another way,” Colau said. “It’s a historic opportunity.”

The thorny issue of tourism will also be tackled, with an effort to design a more sustainable model for the city. “Tourism is out of control,” said Colau, pointing to areas such as the historical centre that have become saturated with hotels and tourist apartments.

Rents have rocketed as a result and neighbourhoods and small businesses have been pushed out of the area. “Everyone wants to see the real city but, if the centre fills up with multinationals and big stores that you can find in any other city, it doesn’t work,” she said. – © Guardian News & Media 2015