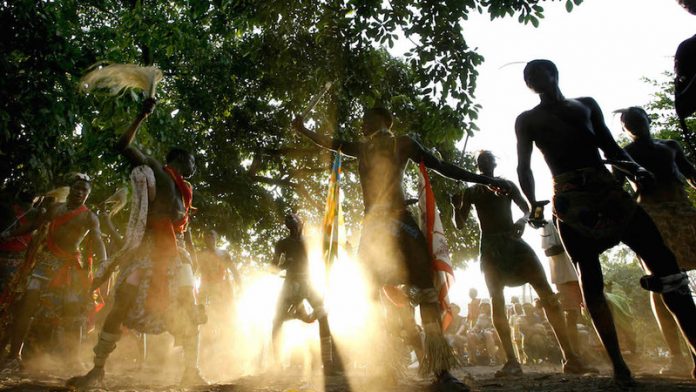 A mix of locals and music fans were watching silently or dancing, framed by the branches of the giant “fromager” tree that marks the centre of the Senegalese village of Diembering, as hip hop band Tirailleurs started to sing about me.

Or at least apparently they did – if only I could understand their Wolof language. Tirailleurs were performing at the four-day Festival des Rizieres, an annual celebration of hip hop and reggae in the southern Casamance region of the West African country.

Tourism in this lush region, slightly cut off from Senegal’s bustling capital Dakar by Gambia, which slices through the middle of the country, has suffered from a decades-old separatist conflict, now largely dormant.

Ebola has taken a further toll on the tourist industry, even though the West African country only had one case of the virus, and has been Ebola-free since October. Travel from Dakar to Ziguinchor, the capital of the Casamance, has also been challenging, involving either a twice-weekly overnight ferry down the coast and up the lazy Casamance river, a short hop on Senegal Airlines’ one working airplane or a bumpy road trip via Gambia in a “sept place” – seven-passenger taxi.

But new ferries introduced earlier this year have upped the boat ride frequency to four times a week, while the end of the tourist visa requirement from this month will also make travel cheaper and easier to this francophone country.

Ferry in style
It’s not the Congo, but the ferry trip upriver through the mangroves and past narrow painted “pirogue” fishing boats is still a must for fans of Joseph Conrad’s Heart of Darkness or Graham Greene’s A Burnt-out Case.

Get a cabin – supposedly the newer ferries have fewer of them – and if traveling in a foursome, don’t forget to present your passports at reception for a cabin key and towels. Breakfast is included in the ticket price too, with the meal served at just about the right time for seeing the ferry dock at the picturesque resort of Ile de Carabane, en route to Ziguinchor.

Ziguinchor itself is a quiet town in comparison with Dakar, with the vegetation green and many of the red sandy roads undisturbed by cars. You can wander past colonial buildings and visit produce and craft markets. Fresh fish comes in daily off the boats, while restaurants serve a mixture of Senegalese food, such as national dish Thieboudienne – a fish and rice dish with similarities to paella – and French classics like omelets, crepes or mousse au chocolat.

It seems like the food is good anywhere you go, including on the street, but  Hotel Kadiandoumagne and Le Makari are worth a visit. Senegal is a popular destination for birdwatchers – take a trip on a pirogue to Bird’s Island, to spot flamingos, pelicans and herons, amongst others.

Coastal tour
The jewel in the crown is Cap Skirring, just over an hour’s drive from Ziguinchor, where there are kilometres of sandy beach. There are hotels for different price brackets along the coastline and more than enough room for all, even in an active tourist season.

Campement Paradise is good value and, as with many of the hotels, you just tumble past the palms and down a few steps to hit the sand. There are several restaurants along the main street of this small town, with regular live music at Le Biarritz. It’s also a good coastline for water sports, and you can get out on a pirogue or kayak.

Senegal is a very flat country, making cycling not too arduous. A cycle trip with a guide for $8.75 a person takes you to Kadiout, the open-air museum of the Diola people. In the Diola language, Kadiout means the holes made by the giant roots of the fromagers, and the museum is dotted among the trees’ roots.

Diola is one of several native languages of Senegal, although Wolof is the most widespread. The fromagers are not quite Californian redwoods, but these huge, knobbly, centuries-old trees are still “rafet na” – at least I learnt the Wolof term for “beautiful”. – Reuters