Burundians’ hopes live – and die – on the MV Liemba 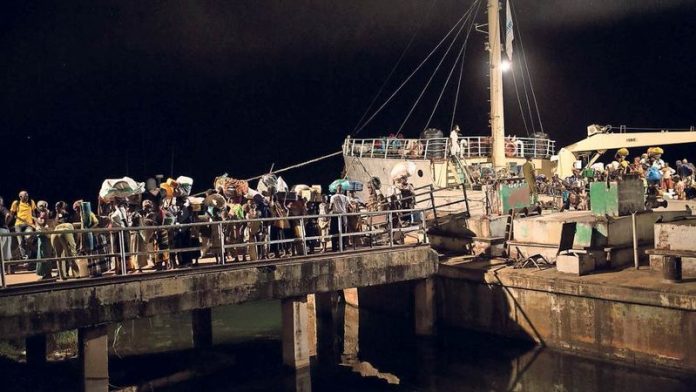 Generally, when they arrive at Kigoma in Tanzania, they are singing songs of joy and hope but they also resonate with sadness.

These are Burundian refugees abroad the MV Liemba, a ship that is more than 100 years old.

Once aground, they are moved to their new address: Nyarugusu camp, where they hope to get tents, medical attention and food supplies. Most of the humanitarian agencies in the region are there.

According to recent data from the United Nations High Commissioner for Refugees (UNHCR), there are 46 983 refugees, including those not yet registered.

Most of them have been placed in the Kagunga, Lake Tanganyika Stadium and Nyarugusu camps.

Many of them cross the border between Burundi and Tanzania near Kagunga. They come in groups, sometimes as many as a few hundred at a time, and some are sick. But the only way to transfer them from Kagunga to Kigoma town is on the MV Liemba.

The ship, formerly known as the Graf von Goetzen, was named after the former German governor for East Africa, Gustav Adolf, Graf von Goetzen. Built in 1913, it was used during World War I, and later as a means of transport for the colonial government and for control of Lake Tanganyika.

Now the UNHCR uses it twice a week to ferry refugees fleeing a deteriorating Burundi.

A long wait
Those who board it have come through the Kagunga border post. But they have had a long wait. It can take a week or two, and sometimes even longer, for families to get a place on the ship.

An immigration officer at Kagunga, Albert Jeremiah, says hundreds of refugees are crossing the border daily and currently there are more than 20 000 asylum seekers awaiting transportation.

“The higher the number, the more it takes for the UNHCR agencies to reallocate them from Kagunga to Lake Tanganyika Stadium,” he says.

The UNHCR says the ship, which can take 1?900 people, can do two trips a day.

At midday, the MV Liemba anchors offshore at Kagunga. A small boat ferries the refugees to the ship from the dock and it takes hours for boarding to be completed.

As they settle down on the MV?Liemba for the four-to-five-hour journey, the singing begins. But the joyful and hopeful songs soon turn to weeping and grieving about the situation they’ve left in Burundi.

Inside the ship, I meet Kiiza Jackline, a widow. She is with her five children.

“I am not comfortable in my country. We have been living in fear for more than 30 years and our president has no mercy on us … How are we going to continue like this?

“We have spent many, many days at Kagunga. The situation is worse; there is no food, no tents and no shelters.”

Her children have been surviving on a single meal a day, which can be sweet potatoes, ugali (a staple starch) or boiled cassava.

“I don’t want to go back to Burundi. If only you could let us live here [in Tanzania] and get a citizenship. We will thank you a million times,” she says.

Sickness, death
Although Jackline says her situation is dire, she is better off than some of the other passengers. Many are sick and some are at death’s door.

On the way to Kigoma, 12-year-old Kigesa Murukusa dies. His mother says the boy had diarrhoea earlier that morning, “but it was not serious”. Yet, it became progressively worse on board and there was no medical staff to help him. He died a few minutes before the ship reached the port of Kigoma.

Death is a frequent traveller on the MV Liemba. The Kigoma regional medical officer, Dr Leonard Subi, says about 10 people a week die in transit from Kagunga to Kigoma.

The UNHCR senior regional officer, Patterson Njogu, says they have tried to monitor conditions on the ship and have placed more attendants on board to take care of the sick.

But death is not the only problem. Many children get separated from their families during the journey and find themselves alone at the Lake Tanganyika Stadium in Kigoma.

The Tanzanian ministry of health and social welfare says more than 600 children have been separated from their families.

The ship’s captain, Mathias Mwanjisi, says he is proud of the ship. The MV Liemba has a remarkable history, including having sunk twice, been salvaged and renamed, he says. Apart from moving asylum seekers, the MV Liemba also sails twice a week from Kigoma to Mpulungu in Zambia, a journey that takes three days.

It is no longer just a colonial relic. It carries the hopes of thousands of Burundians fleeing their homes and seeking a better life in Tanzania.