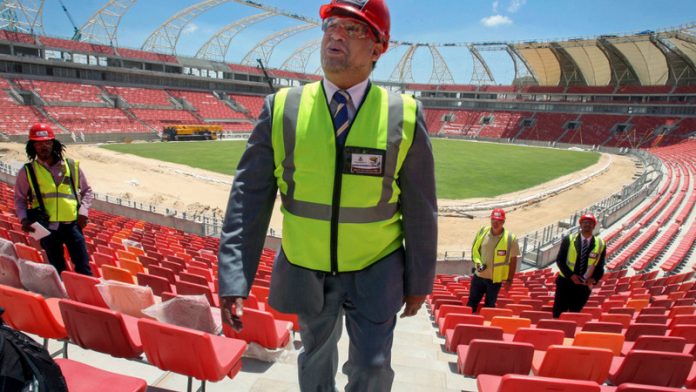 South African 2010 World Cup boss Danny Jordaan asked Fifa to pay the $10-million that United States prosecutors allege was a bribe after he had “a discussion” with Nkosazana Dlamini-Zuma, now the African Union chairperson.

This supports the allegation, first contained in the US indictment of football officials internationally and unsealed last week, that the “government of South Africa” had agreed to a bribe, disguised as a football development contribution, for Caribbean football boss Jack Warner and two others.

The payment was allegedly to secure their support in the Fifa executive committee vote that won South Africa the right to host the 2010 World Cup.

Sports Minister Fikile Mbalula, speaking for the government, has insisted that the $10-million payment was intended as a bona fide contribution to football development in the Caribbean. But it is understood from a senior government source that members of President Jacob Zuma’s Cabinet are privately not convinced of this.

Worldwide scandal
The allegations about South Africa have become the sharp end of the worldwide scandal unleashed by the US indictment, which describes “corruption that is rampant, systemic and deep-rooted” in football. Among those in the firing line are Valcke, whom the New York Times has outed as the unnamed Fifa official allegedly central to the $10-million payment.

Valcke, backed by Fifa, this week denied initiating or authorising the payment, saying the Fifa finance committee head, who has since died, had done so.

But Jordaan’s letter confirms that Valcke was the South Africans’ contact in the matter. Like a subsequent letter from Molefi Oliphant, then the South African Football Association president, Jordaan addressed his letter to Valcke. Oliphant’s letter was leaked earlier this week.

This week the Mail & Guardian also heard of an allegation that Fifa president Sepp Blatter encouraged the South African government at the highest level to accede to Warner’s request (See “How much did Blatter and Mbeki know?“).

On Wednesday, Warner himself pointed a finger at Blatter. In a rambling television advertisement, he said he would no longer “keep secrets” for Fifa and that he had evidence supporting “my knowledge of transactions at Fifa, including but not limited to its president, Mr Sepp Blatter”. Blatter had announced his impending retirement the day before.

‘A promise’
Jordaan’s letter to Valcke, like Oliphant’s later one, ascribes the payment to “a promise by the South African government”, before grappling with a predicament also identified in the US indictment: although the government allegedly agreed to the payment before the May 2004 Fifa vote, it subsequently shied away from paying it directly, presumably because of the risk.

The indictment cites Chuck Blazer, the US football boss and Warner’s associate, as “periodically” asking Warner about his cut. He then learnt that “the South Africans were unable to arrange for the payment to be made directly from government funds”.

Blazer pleaded guilty in a secret 2013 plea agreement before assisting US authorities. In a New York District Court transcript unsealed this week, he confirmed: “I and others on the Fifa executive committee agreed to accept bribes in conjunction with the selection of South Africa as the host nation for the 2010 World Cup.”

Jordaan’s letter is dated December 10 2007, three weeks before the first of three tranches totalling $10-million flowed from Fifa to accounts controlled by Warner, according to the indictment. It charges that Warner took most of the money for himself and passed $750 000 on to Blazer. A third unnamed official was allegedly also intended to benefit.

Jordaan tells Valcke: “The South African government has undertaken to pay an amount equivalent to US$10-million towards the 2010 Fifa World Cup diaspora legacy programme”, which ostensibly had to ensure the African diaspora in the Caribbean benefited.

Recommendation
Jordaan says Jabu Moleketi, then deputy finance minister and a member of his 2010 local organising committee (LOC), “recommended that this money be paid over to Fifa”.

This appears to suggest that Moleketi felt the government should pay Fifa, that would in turn pay Warner’s development fund.

Moleketi claimed on Thursday that the letter was “a fabrication”, and denied having “a conversation of that nature” with Jordaan.

Jordaan’s letter continues: “I have subsequently had a discussion with the minister of foreign affairs, Dr Nkosazana Dlamini-Zuma, who has said that the [government] funds should rather be paid over to the [LOC]. In view of this determination, I want to suggest that Fifa deducts this amount from the LOC’s future operational budget and deals directly with the diaspora legacy support programme.”

This proposed triangular arrangement further distanced the government from a payment displaying the hallmarks of money laundering: Fifa would pay Warner, offsetting that against payments Fifa owed to the LOC, and the government would compensate the LOC for the resulting hole in its accounts.

Formal instruction
Oliphant’s letter to Valcke was dated March 4 2008, three months after Jordaan’s. Although it contained the formal instruction to Fifa to effect the transfers, two of the three tranches had already been paid, implying that Jordaan’s letter, and possibly other communications, had already given Fifa the comfort to proceed.

Damningly, Oliphant’s letter also asked that Fifa put Warner in personal control of the money. This is consistent with the US allegation that the diaspora programme was a fiction to cover the intention that Warner, Blazer and the unnamed official should benefit personally.

Warner was the president of Concacaf, the football confederation of North and Central America and the Caribbean, and Blazer its secretary general.

Mbalula, in several statements and, as the scandal escalated, at a press conference on Wednesday, insisted the payment was not intended as a bribe. “It was legacy money. South Africa chose to support the diaspora. It is our own policy of supporting the African diaspora. That is why the money was given to Concacaf.”

But National Lotteries Board records show that it transferred a cumulative R88-million to the LOC over the three years, starting in 2008. The amount, at the exchange rate of the time, was roughly equivalent to the $10-million hole left in the accounts of the LOC, and ultimately Safa. It was earmarked for the building of Safa football fields in South Africa.

Dlamini-Zuma, who also served on the LOC, did not respond to queries sent to her AU spokesperson, Jacob Enoh-Eban, on Thursday.

Moleketi said neither he nor Dlamini-Zuma, as LOC nonexecutive directors, had the authority to approve a payment. “In short, I think it is far-fetched. I have never seen such a letter; I have never had such a conversation with Danny Jordaan. So it is quite clear that the government was never involved in this matter.”

Jordaan declined to comment and said in an SMS: “Ministers dealt with issue.”

*After the print deadline for this story, Fifa spokesperson Delia Fischer responded to the allegation that Jordaan’s letter to Valcke suggests the latter was intimately involved with the $10-million payment, despite earlier denials.

This is her response:
“It suggests nothing of the sort. As Mr Valcke has already explained, all requests of any kind have to be made formally through the secretary general’s office.  As our statement already says, Safa instructed Fifa that the diaspora legacy programme should be administered and implemented directly by the president of Concacaf who at that time was deputy chairman of the finance committee and who should act as the fiduciary of the diaspora legacy programme fund of US$10-million. “The payments totalling US$10-million were authorised by the then chairman of the finance committee and executed in accordance with the organisation regulations of FIFA. FIFA did not incur any costs as a result of South Africa’s request because the funds belonged to the LOC. Both the LOC and SAFA adhered to the necessary formalities for the budgetary amendment.”

Look to China for solutions to Fifa corruption