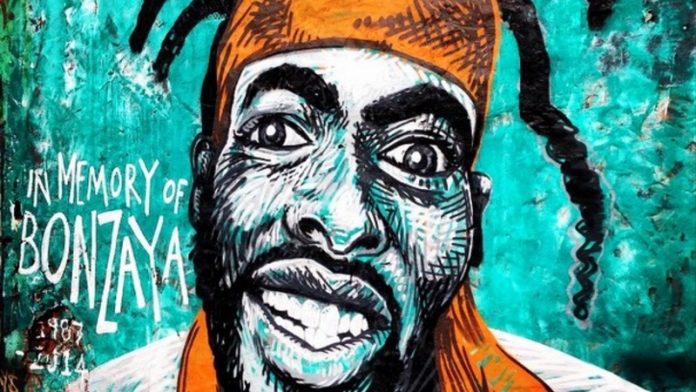 “The most powerful community for outliers is online,” says Faith47, one of the Mother City’s most famous street art exports and a keen Instagrammer. Freddy Sam, Jack Fox, Nardstar, Falko and DALeast are just a few more of Cape Town’s prolific street artists sharing on Instagram.

Inspired by the walls of old buildings, derelict parking lots, and the abandoned homes of the city’s historical District Six and Woodstock suburbs, they all use this social media tool to showcase their ideas, work and process. And for those who don’t, other Instagram accounts do, like  Cape Town Street Art for one.

But it was a different story during apartheid, when another sort of street art first gained momentum in Cape Town. Artistic expression was localised and about protesting the status quo. Then, the possibilities of catapulting into the global arena weren’t a couple of clicks away. Faced by strict censorship laws, street artists and their mostly text-based graffiti counterparts had political convictions to get off their chests.

All a far cry from today’s street art that, although political at times, is often seductive and features otherworldly creatures on wall works around town. Despite being illegal in Cape Town without a permit, street art is fast becoming a signifier of urban regeneration, a way of beautifying decaying city buildings and areas with inspiring images and messages. Just this week Future Cape Town, a non-governmental organisation forming part of Future Cities, reported that Parow station’s precinct is next in line for a colourful mural makeover.

And, in the city centre, similar urban upliftment projects have sprung up. One such is Harvest, an interactive mural by Faith47 who, together with Design Indaba Trust and Thingking, created this work. It physically lights up the wall of a block of council flats along De Waal Drive. To view these and other impressive Cape Town street art works, a tangible experience is recommended. Here are eight of our favourites on Instagram – a couple of clicks away.

According to Mak1one, street art crosses all boundaries. He sees it as a form of expression connecting strangers from various countries and continents with each other. On a mission to inspire the youth of disenfranchised communities to “pursue their dreams and talents”, he also works with schools and companies to create awareness for street art. See Mak1one’s images via Capetownstreetart’s Instagram account.

Instagram page
This legendary Cape Town street artist’s recent works are less politically engaged than her 2010 series quoting parts of the Freedom Charter (of which her mural in Woodstock, All shall be equal before the law, is one). These days her creations are more concerned with conveying a sense of the metaphysical, a global connectedness and understanding between people. This work is on De Waal Drive.

Recently named by the Huffington Post as one of the world’s top 25 female street artists, the young Nardstar aims to uplift and beautify neglected parts of the city with her bright and geometric creations. She claims to be fonder of animals than of humans.

Instagram page
Chinese-born and now residing in Cape Town, DALeast is an accomplished sculptor, painter and digital artist who travels abroad for six months every year to tag the walls of other countries. His huge animal works, seemingly formed out of a myriad of small metal shards that comes undone in certain places, “reflects the human condition,” he says. This running cheetah can be seen at the skate park in Gardens.

Another acclaimed Cape Town street artist, Freddy Sam, made National Geographic’s list of 11 street art greats in 2014, alongside the likes of Banksy and JR, and in 2011 he was named one of Mail & Guardian’s 200 young South Africans who make a difference. He highlights current social issues in his work, such as the above 2014 mural commemorating 20 years of freedom in South Africa, which can be seen in Woodstock.

Instagram page
The teenage son of Faith47 and Tyler B Murphy has developed a unique and intricate illustrating style. Influenced by his extensive travels, he says, “my street art, animation and music connect to create a reflection of my life”. Instilling emotion in his sketches is important to him as well as the influence his love for a wide range of music has on his work. The above large scale creation can be seen in Woodstock.

Instagram page
One of the pioneers of graffiti in Cape Town, Falko created his first work on his school’s wall back in the eighties – Westridge Secondary in Mitchells Plain. The school made its walls available to young graffiti artists to help them vent their frustrations. Falko One is involved in community projects and runs workshops to create awareness about graffiti as an art form. This work is called Birthday and can be seen in Langa.

Instagram page
Talented in more than one creative medium, Auret has only recently put his hand to painting on walls. Leaving behind an advertising career in 2011, he first set off to sail the world for 10 months before coming back to pursue his first love – a career as full-time artist. His In Memory mural of Cape Town rapper Bonzaya can be seen in Woodstock.

This content has been produced in partnership with Cape Town Tourism. Contents and photographs were sourced independently by the M&G’s editorial team.

* Note, the Faith47 and Falko One images have been updated. The previous version of the story stated that Falko One had collaborated with Nardstar, this was incorrect and has since been corrected in the updated version.