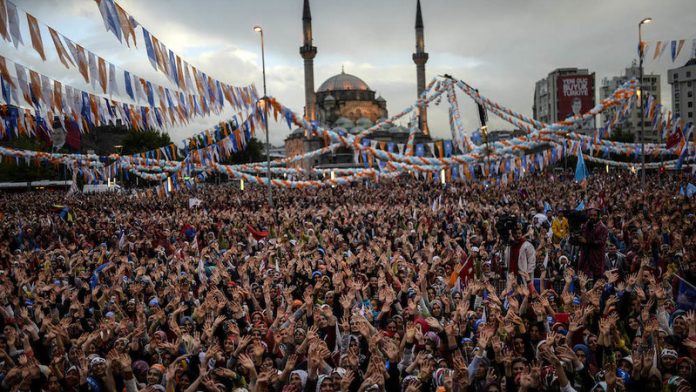 The rolling hills next to the Black Sea, 90 minutes northwest of Istanbul, have long been prized for their dense forests and pristine lakes. The water buffalo that graced this landscape and supplied the city with much of its dairy produce are vanishing from what Recep Tayyip Erdo?an, Turkey’s president, has made into one of the world’s biggest building sites.

About 2.5-million trees are being cleared from an area of 6 000 hectares. The lorries are bumper to bumper, 24 hours a day. Locals can barely sleep or cross the street.

“The forests are gone, the villages are gone, the livestock is gone,” says Cemalettin Gün, a farmer. Prominent among the tens of thousands of election posters covering Istanbul is the explanation for the construction frenzy: “We are building the world’s biggest airport,” boast posters of the governing Justice and Development Party, or AKP, that Erdo?an created and turned into the most formidable political machine in Turkey’s history.

Erdo?an loves gargantuan, world-beating projects – a huge election poster of himself and the prime minister, Ahmet Davutoglu, entered the Guinness Book of Records last week as the biggest, anywhere. He seems to like felling trees. Less than a year ago he moved into a new presidential palace in Ankara of pharaonic proportions, worthy of Nicolae Ceausescu or Saddam Hussein. It outstrips Washington’s White House by far.

The staff include five experts who check Erdo?an’s food for poisoning. The Ankara palace also required a major exercise in forest clearance. Turkish courts, last week, repeatedly ruled the building illegal. “Let them try to knock it down. I’m moving in anyway,” the president responded.

When Turkey goes to the polls on Sunday, in what is shaping up to be an epic election, Erdo?an and his legacy will be the main, if not the only, issue on voters’ minds.

Creating his legacy
“It’s what he calls the new Turkey,” says Cengiz Çandar, a leading political analyst. “This is about his legacy; he’s very ambitious. He needs a strong presidency. He’s also very uneasy about corruption allegations and needs safeguards. Some fear it might be Turkey’s last election – before a dictatorship.”

The reason for such worries is that Erdo?an has turned the ballot into a kind of referendum on his solo drive to rewrite the country’s Constitution, abolish parliamentarianism and install a new executive presidency occupied by himself. Paradoxically, he isn’t even running for election.

As head of state since last August, following a three-term, 12-year premiership, he is supposed to be non-partisan, above the political fray. Instead he is pounding the country, speaking himself hoarse. During a recent campaign week, he notched up 44 hours on loyalist national TV.

“Erdo?an has proved since 1994 – when he was mayor of Istanbul – that he can reach any goal he sets himself,” says Metin Yüksel, the deputy editor of Sabah, a daily newspaper and AKP’s mouthpiece. “No opposition has been able to stop him. Turkish voters like a leader.”

The main election question is whether Turkish voters will opt not to stop Erdo?an so much as clip his wings and deny him, for now, his plans for systemic change, entrenching his own power.

Since his 2002 landslide victory thrust Turkey into a new era starting with great promise and in recent years, by general consensus, has degenerated into whimsy and authoritarianism, Erdo?an has led the AKP to three election victories, increasing its vote every time and securing comfortable absolute majorities in the 550-seat Parliament in Ankara.

To change the system, the AKP needs a two-thirds or 367-seat majority to enable it to rewrite the Constitution. Failing that – and it looks highly improbable – it needs a three-fifths or 330-seat majority, which would allow it to call a plebiscite on constitutional revision. That, too, is unlikely. But there is general agreement that the party is the slickest, most organised political machine Turkey has ever seen. All bets are off.

Curbing the independence of key institutions of state
The AKP owns the bureaucracy, controls the media, has returned the army to barracks and marginalised the military, traditional arbiters of Turkish politics. Erdo?an used his final term as prime minister to curb the independence of the key institutions of state – the Constitutional Court, Parliament, the central bank, prosecution and judiciary services.

Independent media are cowed. Social media are regularly threatened. Schoolchildren are prosecuted for making fun of the president. He remains the undisputed party leader and is said to have vetted for loyalty to him the AKP’s lists of candidates for seats on Sunday.

In talk on the election, the name of Davutoglu, who is party president, hardly crops up; talk of Erdo?an is ubiquitous. “This is a presidential system already. It’s just not legal,” says Çandar. “The question is whether he can legalise it and legitimise it.”

There are indications he may fail. In Istanbul’s Grand Bazaar – one of the world’s oldest covered markets – traders are often seen to represent Erdo?an’s core constituency – conservative, religious business owners. Asking about the election presses buttons on a vigorous debate revealing nuanced views on what is at stake.

Firat Inci (32), a bazaar restaurateur from the southern town of Siirt, has always voted for the AKP and for Erdo?an. “He’s a fantastic person. You need to understand his background and what he has achieved. We used to have military coups every 10 years, and Erdo?an pushed back 70 years of military domination.”

‘Drunk on power’
But, for the first time since he’s been able to vote, Inci this time is opting for the opposition HDP, or People’s Democratic Party, a new grouping of leftists and liberals mainly representing the large Kurdish minority that has always struggled to be represented in Parliament. “Erdo?an’s attitude and behaviour make me uncomfortable,” he said. “He got drunk on power. And a presidential system won’t be good for Turkey.”

Sezgin Tanrikulu, a human rights lawyer and MP for the main opposition Republican People’s Party (CHP), echoes allegations of presidential megalomania. “They’re so glued to power, they could try anything to keep it. It’s a fixation …”.

To judge by his nonstop speechifying, Erdo?an views politics as a majoritarian blood sport in which the winner takes all, loyalty is rewarded and opposition denounced as treachery. It is a highly polarising approach, especially for a head of state who is supposed to preach inclusiveness.

“In Turkey, supporting a political party [is] … like supporting a football team. You can be either with or against one party, but none really want to be a party for everyone in Turkey.” The AKP and Erdo?an, he adds, use divisive language to rally their base. “They still present themselves as victims. They say anyone who votes against them wants to return to Turkey of 15 years ago. I’ve always defended the right of women to wear a headscarf, the right to practise one’s religion freely. If anyone is being victimised in Turkey today, it’s those that criticise Erdo?an.” – © Guardian News and Media 2015