Last year, when a group of high school girls from the social change movement Rock Girls heard about the missing girls in Nigeria, they wanted to drive there themselves to go find them. Inspired by their desire to help, Rock Girls – based in the notorious gangland of Manenberg in the Western Cape – is taking girls on a series of road trips around South Africa. The movement uses group discussions, art, photography, film, and radio to create and inspire more safe spaces for young women in South Africa. Their first trip from June 12-15 went from Cape Town to the Eastern Cape with ten girls, accompanied by Rock Girls founder India Baird, to interview other girls living on farms and in townships about their lives, and document their stories through radio and film. The Mail & Guardian will be publishing a series of diary entries written by the girls about their trip.

Read:  Diary of day one

Zaida Griffiths, grade 10, Leadership College
Just yesterday we were excited to go on the trip and yet after not long we are all longing for our families and wanting to know how it’s going with them. All was happy for us but yet sad as well. Everyone wanted to know about what we were going to do and where we going to go and how we were going to get there. 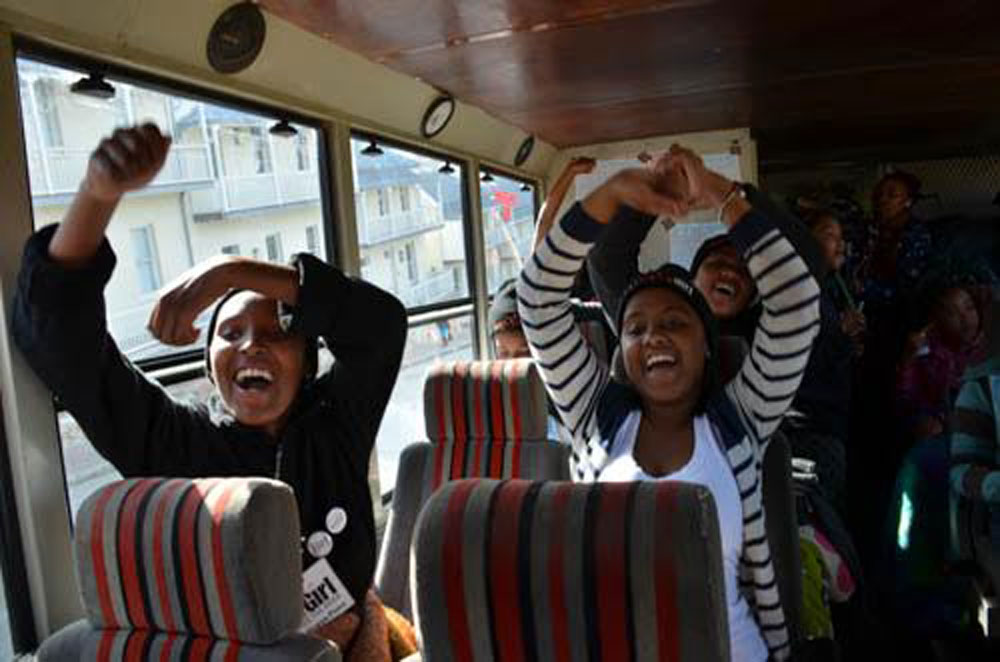 Ferlen Du Preez and Kelly Petersen sing one of the songs that has come to be known as one of the Rock Girl theme songs. (Rock Girls)

We are all very happy for getting to go out of Manenberg and away from all of the shooting. What I can’t understand is just how a person can kill another without feeling sorry or full of sorrows. I am glad that I had this opportunity to come away from all the happenings in Manenberg and I’m at least trying to make a difference in myself, my community, neighborhood, little ones and even the older ones

Today I heard few wise words that say you need to go through the worst to get to the best which is actually the truth because I’ve gone through it myself which is why I just love saying this phrase.

Amaan Heuvel, grade eight, Leadership College
Today was adventurous and exciting. First of all we met Shane who started Magpie Art Collective, which started out as a small business and grew every year. Now it is well known for designing various types of artworks out of recycled things.

Then we were on the road again. India was planning to surprise us and we were expecting something cool but not as life changing as what we have done and seen today.

We went on a game ride in a game reserve where we fed elephants which were about 13 feet tall. We then rode in separate 4x4s. At first we thought we wouldn’t find any animals because it was extremely quiet, hot, still and camouflaged. But while we were driving we came across many different types of creatures like hippo, buffalo, meercat, wildebeests, grey rhebok and giraffes. 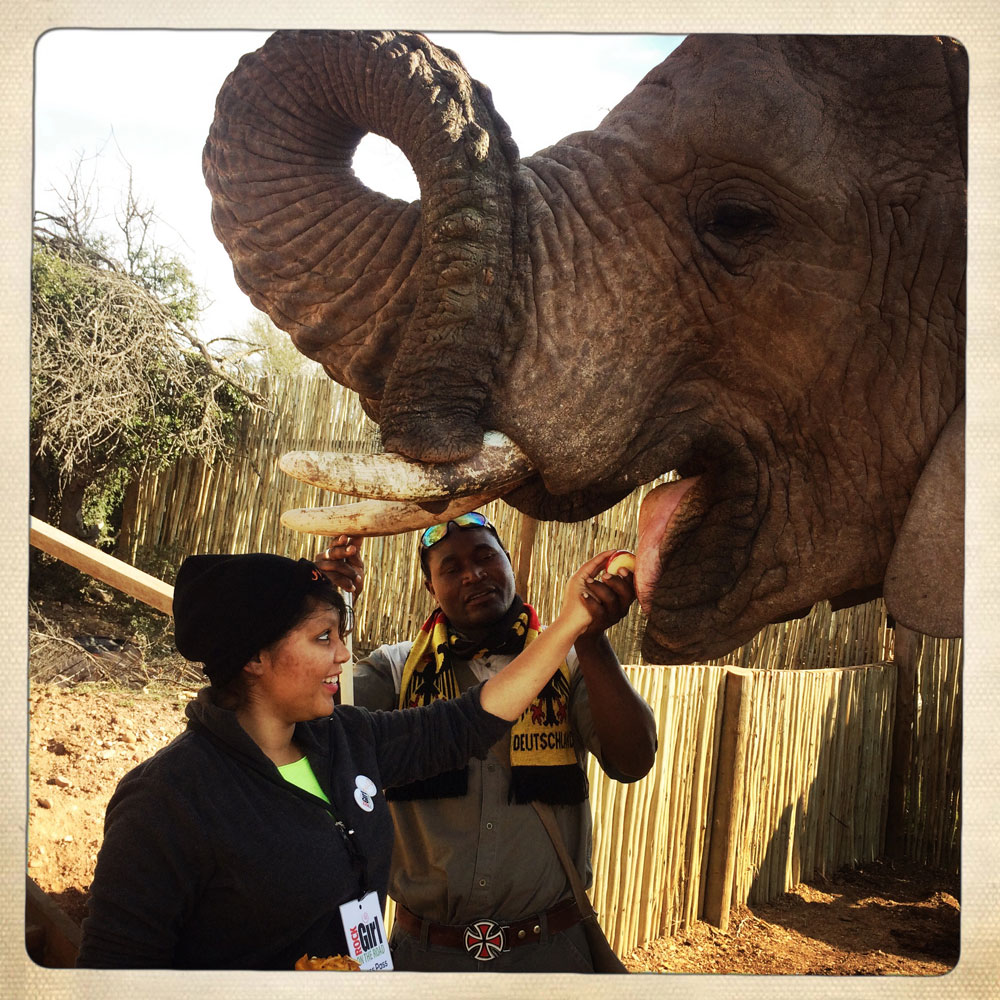 Quanita Stemmet, who is in grade eight at The Leadership College, feeds an elephant at Buffelsdrift Game Reserve in Oudtshoorn. (Rock Girls)

We also learned lots about them from the ranger, Marine, who was the first female game ranger at the lodge and she has now trained two other rangers. The ride was about two hours and was absolutely great. We stopped halfway for a quick something to drink and took lots of pics.

We went to finish the ride after that and also got a closer look at the giraffes. I was surprised to see that they just stood there and stared at us instead of running away like most harmless animals do. But if you are experiencing new animals then don’t underestimate them because they are supposed to look cute and cuddly just before they strike. 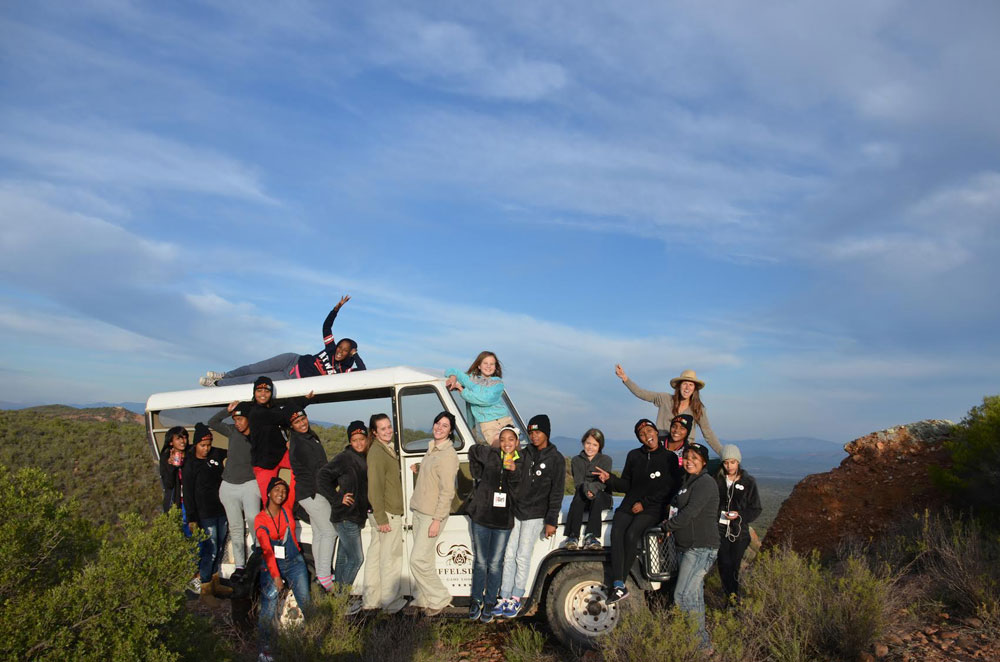 We had a long drive after that. The exciting part was when we got an ice cream and everybody started singing so loudly I’m sure the animals heard it from miles away. Just before everyone fell asleep we arrived at our overnight house just in time. It was dark and nobody could see where they were walking and the lamps weren’t helping. There are no curtains so it is creepy because you can see the outside while all the animals are making all kinds of sounds and all we can see is darkness.

We were all scared to walk out of the house by our selves so India had to drag us down to come and eat dinner.  Our new motto is going to be “be prepared” because these type of things usually happen if you go places you haven’t been before and even if you are qualified and know the places like the palm of your hand, there are always surprises.

Military intervention is not a crime-fighting solution