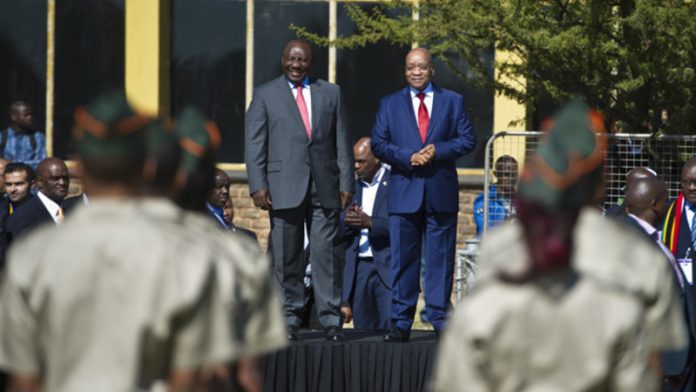 He may be 73-years-old but President Jacob Zuma insists he is still a young man.

Delivering the keynote address at the National Youth Day celebrations in Pretoria on Tuesday, Zuma placed the importance of education at the centre of his speech.

“Education continues to receive the biggest chunk of the national budget as our weapon for socioeconomic development,” he told guests at the National Youth Development Agency (NYDA) celebrations.

“We have thus made education an apex priority since the dawn of freedom because we believe it is a most effective weapon in the ongoing fight against poverty, inequality and unemployment,” he said.

He said the economy is not “growing as fast as we want to and is not creating as many jobs as we need. As a result, many of our graduates sit at home without jobs.”

“We have to work together to provide opportunities for the youth, who are the future of our country. Government cannot perform this task alone. We thank all businesses that continue to employ young people and offer opportunities to them,” he said.

“We are also encouraging young people to become entrepreneurs. The Industrial Development Corporation in partnership with the NYDA and the Small Enterprise Finance Agency have ring-fenced R2.7-billion over the next five years for young people to take up opportunities in business.”

He said in the last financial year, the NYDA supported 1 043 micro and small youth owned enterprises.

According to StatsSA, there are some 5.5-million young people in South Africa between the ages of 15 and 35 who are not employed.

Zuma also reminded the crowd that he never had any formal education. “No teacher can claim to have seen this forehead of mine,” he said to chuckles.

On this day, in 1976, a group of school children set off from Morris Isaacson High School in Orlando, Soweto, to protest over Afrikaans being the medium of instruction, among other grievances against the apartheid government.

There was a stand-off with police, who opened fire on the children. The township was sealed off and attacks on government buildings followed; as well as the flight of many youths and political leaders into exile. This day is now commemorated as Youth Day.

Freedom in South Africa has not materialised 39 years after the Soweto uprising, Democratic Alliance leader Mmusi Maimane said on Tuesday.

“While we have certainly come a long way since those dark days of apartheid – and life is indeed better for most South Africans – many of the freedoms that generation fought for have not yet materialised,” he said.

Maimane was speaking at the DA’s Youth Day commemoration at the Nelson Mandela Bay Metropolitan University.

“Today, 39 years ago, tens of thousands of young people across Soweto stood up to the apartheid government, demanding to be taught as equals in South Africa,” he said.

“Their protest was about more than just the language of instruction. It was a protest against a system of education designed to keep them down.”

Maimane said these were the youth that stood up for a belief that their future could be better.

He said their sacrifice would never be forgotten because it paved a way for the free and democratic South Africa.

“Many young South Africans are still waiting for a time when fairness means a society where their efforts are matched by their rewards,” he said.

“Many young South Africans are still waiting for the opportunities to make a better life for themselves and their families.”

Maimane said the focus in South Africa should be on growing the economy to create jobs.

He said the current education system was one of government’s biggest failures.

Children were being failed early on by teachers who could not teach them to read, he says.

“The state of our education, 21 years into our democracy, is shameful. Ours is considered to be among the very worst in the world,” Maimane said.

“History will one day show that the failure to provide our children with quality education will be our government’s single biggest failure.”

Maimane said the education system should be fixed, starting with basic education.