The fashion designer who felt the call of the ancestors 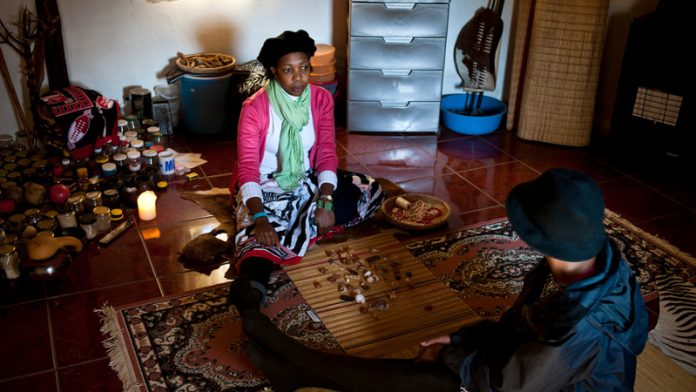 The Mail & Guardian met Finger (32) at her home in Falcon Ridge in Vereeniging. She did her sangoma training last year after her mother’s death.

“My mom had a growth on her lung. The doctors decided they weren’t sure if it was cancer, but put her on chemo anyway. She stopped [the treatment] in February. Then in March, April she deteriorated. She didn’t recover and her body just shut down,” says Finger.

She says that, as her mother’s condition deteriorated, her life and those of her close relatives changed because her mother was the family elder as well as a spiritual medium, who connected them to their ancestors.

They consulted one of her mother’s associates, who told them that Finger would be her mother’s successor. Her mother was supposed to train Finger but died before the training could begin.

Consulting room
When we meet, Finger is wearing jeans, a pink cardigan and pumps, accessorised by a blue beaded bracelet. A cloth with a traditional African pattern is draped over her jeans.

She consults from a rondavel behind her house, alongside the pool area. Next to the rondavel is her fashion design studio. Before we enter the sacred room, we take off our shoes. There are two grass mats on the floor and clear, labelled glass bottles filled with medicine.

Finger lights a candle and invites her ancestors and other spiritual mediums into the room, and then introduces me as Setloholo sa ha Zwane (one who is from the Zwane lineage).

In this room Finger becomes Gogo Mawandle, her sangoma name, which means “ocean” in Xitsonga.

Finger says she trained in her home village in Limpopo and was taught by the same person who had trained her mother.

“Training has become a problem because there are chancers out there,” she says. “They are looking to make quick money out of people. There are those pitfalls that people go through. But usually your ancestors are the ones who choose and will show you, in your dream, the person who will train you.”

The Interim Traditional Health Practitioners Council was established last year to issue licences to practise, approve training and discipline members guilty of malpractice. The council is also meant to have the power to institute legal proceedings against members of the profession.

Yet some observers – such as academic Lefatshe Moagi – have questioned the wisdom of trying to regulate and control traditional healing practices according to Western medical norms.

Finger says that traditional healers have always been regulated, even if it is not in the conventional way that most people understand.

“My mother and I were trained by the same person. In villages we know who the traditional healers are and they are accepted and known by the community.

“When a new traditional healer comes from neighbouring villages, we will ‘interview’ the person. In that regard, the practice has always been regulated,” says Finger.

Pressing problem
She says the most pressing problem is urbanisation: people who live in the cities do not have a sense of community and cannot distinguish the chancers from the real healers. She also questions how the regulation and registration of healers will be enforced.

“Bosangoma [being a sangoma] is divinity. I have a number of spiritual mediums who work through me. I have my ancestral lineage and foreign spirits. How do you regulate spiritual healing and divinity?”

We have a “reading” session. Finger takes her bones and I blow into the muti bag. She reintroduces me to her ancestors. I hand her a €20 note and apologise for not having any local currency. She explains the notion of money as an exchange of energy.

“This money means something to you. You have worked for it and you will not give it up for something you don’t care for. You are investing in the reading.”

She says the three biggest myths about traditional healers revolve around the question of money, that they are anti-religion and involved in witchcraft.

‘Misconception’
“There is a misconception that the church and healing are separate. The second is witchcraft. You are accused of voodoo … of doing things … witchcraft. Witchcraft is there, it happens, but being a witch doctor is not the same as bongaka [being a sangoma].”

Finger says traditional healing involves custom and culture, but not religion, which makes people think it is opposed to religion.

“The two are separate: you can still be a very religious and spiritual person. Religion is very important. Your ancestors link back to God. That’s because some missionaries came to us and said: ‘This is barbaric; here’s your God.’ So people are confused. If anyone sits down and thinks about this properly, we will come to the same conclusion,” she says.

Finger then throws the bones on the floor.

“There is a lot of tension at your office and a lot of negative energy because people are anxious. This is what is making you tired,” she says.

“You need to buy rose quartz crystals and place them on your desk. I bet you didn’t think a sangoma would prescribe that, did you?”