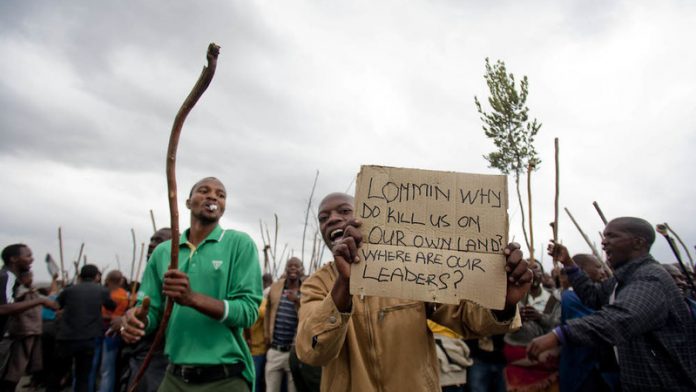 The long-awaited report of the Farlam Commission of Inquiry is now due to be released on June 30, almost three years after the Marikana massacre of August 16 2012.

The commission’s report will hopefully be a substantial step towards creating accountability for the killing at Marikana. But, for a variety of reasons, the challenge of achieving accountability and justice for the massacre will remain one characterised by profound complexity.

One element of this complexity concerns questions about the role of Cyril Ramaphosa. At the time of the massacre, Ramaphosa was not deputy president as he is now. He was a nonexecutive member of the Lonmin board. His company Shanduka was a minority shareholder in Lonmin, and he therefore had a vested interest in the profitability of the Lonmin mines.

Ramaphosa has come to be the focal point of many of the calls for those responsible for the massacre to be held accountable. In closing argument before the commission, advocate and Economic Freedom Fighters member Dali Mpofu, for the injured and arrested miners, said that Ramaphosa should be “accused number one” in the murder prosecution that should be pursued against those responsible for the massacre.

Mpofu’s EFF associates have taken this argument forward. At a May Day rally in the Eastern Cape, Julius Malema said the EFF would not accept the report of the commission if it did not find that Ramaphosa was the one who ordered the killing: “We want a report that says Cyril Ramaphosa must be arrested and stand before court for the murder of the workers in Marikana.”

Appearing again in court last week in an action for the release of the report, Mpofu said the miners were worried that Ramaphosa will “interfere” with the report. This suggests the miners represented by Mpofu are assuming that the report finds Ramaphosa responsible for the massacre.

The critical evidence, which some take to be a type of “smoking gun” implicating Ramaphosa, is a series of email messages that he sent on August 15, the day before the massacre. The emails, addressed to other members of the Lonmin board, reveal Ramaphosa’s role in the mining company’s efforts to ensure that the government engages more decisively with the Marikana situation.

A key focus, in which he and Lonmin chief commercial officer Albert Jamieson made common cause, was the need to emphasise to the government that the conflict at Marikana be understood not as a labour dispute but as an issue of criminality.

“They are plainly dastardly criminals and must be characterised as such,” Ramaphosa said in one message to Jamieson at midday on Wednesday. “In line with this … there needs to be ‘concomitant action to address this situation’.”

Two and a half hours later, with an apparent sense of achievement, Ramaphosa reported by email to Jamieson that the minister of minerals and energy affairs, Susan Shabangu, had agreed to “correct” her previous characterisation of the conflict as one that unions and management should “sit down” and “sort out”. Shabangu had also agreed, Ramaphosa said, to “get the minister of police, Nathi Mthethwa, to act in a more pointed way”.

Ramaphosa’s language here is partly metaphoric and to some degree ambiguous. But it does not imply more than that Ramaphosa was calling for the government and the police to act more purposefully and in proportion to the seriousness of the situation. It cannot be taken to imply that Ramaphosa was calling for the situation to be resolved by means of deadly force.

If no one had been killed the following day, his words might have been characterised as “heated”. But this was not to be. With 34 miners gunned down by the police on August 16, Ramaphosa’s words have come to be seen as loaded with a sinister meaning implying that Ramaphosa should be regarded as responsible for the killings. The call for “concomitant action” has come to be understood as a call for 34 miners to be killed.

Ramaphosa had reasonable grounds for using his influence and authority to get the government to strengthen the police intervention at Marikana. In the three days prior to the Wednesday on which the emails were written, 10 people had already been killed. One cannot fault him for a concern with these killings. But Ramaphosa may be criticised for having adopted a simplistic approach to the overall conflict that demonised the strikers.

If Ramaphosa had referred to his experience as a labour leader, he might have had the wisdom to not only focus on the crimes, but also to concern himself with the context of conflict within which they were taking place. He might have still called for more decisive police intervention, but he would have also focused on ensuring that management engage fully with the strikers.

Had he intervened with a more open frame of mind, he also might have recognised that culpability was not necessarily one-sided. The killing of two police officers by miners on the Monday was critical in escalating the atmosphere of confrontation in Marikana.

What we now know is that these killings were to a substantial degree precipitated by poorly judged and belligerent actions on the part of the police. But from his emails, it seems clear that he saw the strikers as the sole source of aggression.

We might therefore wish that, instead of identifying with the one-dimensional view that Lonmin management had adopted, Ramaphosa had also used his influence to ensure that Lonmin negotiate with the strikers. Considering Ramaphosa’s stature, experience and reputation in South Africa, this may be something that we not only might have wished, but expected from him.

Should this failure on Ramaphosa’s part – one which he did not refute under cross-examination – translate into holding Ramaphosa responsible for the massacre itself? A critical factor for understanding the way in which events unfolded at Marikana was the absence of a willingness on Lonmin’s part to negotiate with the strikers. Lonmin’s intransigence was encouraged by different role-players. In her meeting with Lonmin on the Tuesday, two days before the massacre, police provincial commissioner Zukiswa Mbombo encouraged Lonmin not to negotiate.

Sadly, it must be said that Ramaphosa was one of those who also directly discouraged negotiation.

But should Ramaphosa be expected to have anticipated the chain of events that would be set in motion, in part as a result of his intervention? This would mean that he should have known that those who he was putting pressure on could not be relied upon to act in a responsible way.

In effect, it is to argue that Ramaphosa should have realised that his pressure would probably be taken as giving the green light for a deployment of lethal force against the strikers. This seems to be an argument that goes beyond what might reasonably have been expected of him.

Ramaphosa’s principal culpability is therefore that he contributed to narrowing down the potential for a resolution of the conflict through dialogue. Rather than contributing to its de-escalation, his intervention materially contributed towards escalating the likelihood that the conflict would be resolved through violence. But this is still not the same as saying that Ramaphosa ordered or directly encouraged the killings.

Irrespective of whether or not one agrees with this argument, there seems little chance that the report of the commission will find Ramaphosa directly responsible for the massacre. Whether or not he directly influenced events depends in the main on whether the commission accepts the contention that he directly influenced Mthethwa and, critically, that Mthethwa himself intervened and shaped the course of events.

Both of these contentions were denied by Mthethwa. Although his denials appear on some levels to be implausible, the case against Mthethwa was not articulated before the commission in a persuasive way. In the absence of a finding against Mthethwa, the commission cannot hold Ramaphosa responsible, other than perhaps by saying that he could have used his power and influence in a more productive way to promote resolution of the conflict.

But the politics surrounding the release of the report are too heavily loaded for Ramaphosa to expect a measured assessment of his role. Many view Marikana as an expression of the “toxic collusion” between a parasitic ANC elite and exploitative, and still largely white, capital. Because of his role in Lonmin and the ANC, Ramaphosa is a symbol of the confluence of the two.

In the words of Malema, “Ramaphosa must be prosecuted for the murder of the people in defence of white capital.”

The Marikana commission report is likely to find the South African Police Service to be substantially responsible for the massacre. But translating these findings into accountability on the part of those who were directly involved in authorising the operation and carrying out the killings will remain an arduous process for South Africa.

The signs are that, whatever the actual details of the case against him, if the Marikana commission report does not recommend that Ramaphosa be prosecuted, there is a significant constituency that will reject the report. This focus on Ramaphosa is likely to divert attention from the many more difficult questions about holding accountable those who were directly involved in the killings.

In the first sentence of the 8th last paragraph, the following clarification was made on 22 June: Replacement of the word ‘arguable’ with the words ‘to argue’.