Dancers riel on to LA’s stage 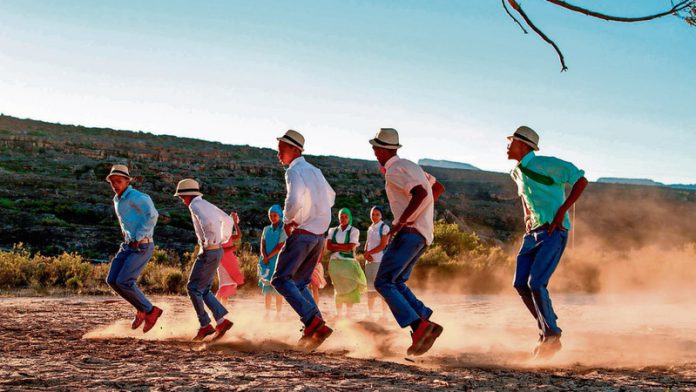 A dust cloud gathers as young people perform a buoyant dance against the rocky backdrop of the vast Cederberg mountain range. Skipping out in a line as the sun sets on the desert, dancers gyrate with each other and their growing shadows. Twirling, shaking and kicking the sand with youthful gusto, this is their take on the Nama riel dance, one of the oldest dance forms, which originated with the Khoi and San people, whose presence in this area is documented on sandstone cave walls.

Riel, characterised by movements such as powerful, synchronised foot-stomping and expressions of courtship rituals, has survived through Khoi and San descendants living in the region. The dance is also being revived in other parts of South Africa. And these young rieldansers, Die Nuwe Graskoue Trappers, are going to the United States next month to represent South Africa on an international stage.

Like other grade 11s, Zarion says he loves dancing to house music and popular kwaito tunes, but riel brings him closer to his roots. Riel, he says, is “a great opportunity to dance my grandmother’s dance”.

Floris Smith, the manager of the Die Nuwe Graskoue Trappers, says, “From a historical point of view, riel comes from the Khoi and the San doing ritual dancing around the fire.

“In the 1940s, 1950s and 1960s it was a courting dance. Men would court the women by performing movements that would symbolise an animal, while the women would imitate house tasks like baking bread or washing clothes. It had been neglected for a long time, and its popularity and frequency of dancing had dwindled over time. Today, with the renewed interest in the cultural authorship of the descendants of the Khoi, the San and the slaves of the old Cape Colony, riel is alive and well again,” he told the Financial Mail.

Die Nuwe Graskoue Trappers comprises 17 teenagers from Wuppertal and other villages in the Cederberg area. In their locally made red leather veldskoene, they dance to the music of the band, made up of instruments such as a banjo, drums, accordion and guitars.

The weather was fairly warm when Bushman’s Kloof Wilderness Reserve and Wellness Retreat, a five-star establishment in the Cederberg, invited three writers (me included) to experience its luxury offerings and the expansive wilderness area that has been declared a heritage site and features indigenous plants and birdlife as well as breathtaking rock formations and sandstone caves filled with ancient rock art.

The rieldansers show us a stirring choreographed piece prepared for the trip to Los Angeles, where they qualify as part of Team South Africa 2014-15 to take part in the World Championships of Performing Arts in the ethnic dance category.

Besides being the creative force behind Die Nuwe Graskoue Trappers, Smith is also the executive chef and deputy general manager of Bushman’s Kloof, the main sponsor of the young rieldansers.

“I never thought that we would now be wearing green and gold and representing the country at an international championship, which is mind-blowing,” he says of the dance group he helped form in 2012.

Smith, who has a background in the performing arts and classical ballet, says training the dancers is an organic process: “I can’t teach them to riel. I couldn’t riel two years ago, but I can now. I assist with stage presence and formation, like their lines and circles.”

The troupe took home the grand champion award for best group performance at the South African Performing Arts Championships in Rustenburg in April. They also won gold in categories such as ethnic folk. And the group’s riel band was awarded gold in two categories: open and original.

Smith, whose background in dance has influenced the riel revival in the area, says before he began work with Die Nuwe Graskoue Trappers they lacked a formal structure and funding, which resulted in the troupe constantly taking second place in the many competitions they entered.

Fundraising mission
The group has now garnered much press attention but, despite the fame the group has recently achieved, fortune has not always accompanied it. The Trappers are currently on a fundraising mission for their travels to the US. “There is no money in Wuppertal,” Smith says of the place where most of the dancers are from.

For many of the group’s members from this impoverished part of rural Western Cape, this will be their first time on a plane outside of South Africa.

“To have an international trip for 22 hours is going to be an exciting experience,” says Smith. “Money plays a big role and the project in Wuppertal needs to be sustained. When there’s a practice session, you have musicians coming and you have the dancers from the different villages who need to get to a central point. I have musicians coming from Grouwater, which is the other side of Clanwilliam. So, practice on a good day will cost us about R2?000 and we practice twice a week.”

As the group prepares to jet off, Smith says they are in need of R325?000. “We are due to depart on July 6. With the help of Bushman’s Kloof, Rooibos, Reagola IT management company, Wesgro and some private donors we’ve managed to raise just over R750?000. We still need to fund five kids to the tune of R65?000 per dancer.”

At the championship in Los Angeles, where they will perform 90-second routines in the ethnic folk category, Die Nuwe Graskoue Trappers are not in line for a money prize but Smith believes it will mean a lotto the dancers and the revival of the riel.

“It’s taking you places,” Smith says, recalling what he says to the youngsters in the group when people tell them they are dancing an antiquated dance. “It might be old-fashioned, but let’s not let the tradition die out.”