ANC’s contempt for the judiciary cause for alarm 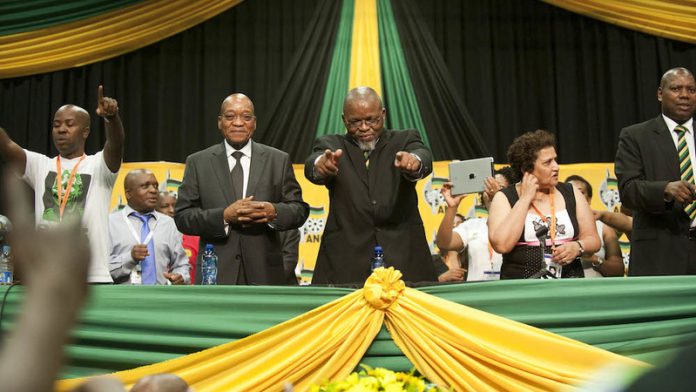 ANC secretary general Gwede Mantashe’s deep-seated antagonism towards the judiciary stems partly from his archaic view of the world, but also from sheer ignorance.

Mantashe’s dangerous paranoia makes him believe that anyone who disagrees with the ruling party wants it out of power. He believes the party is supreme and its power unquestionable.

Shortly after the ANC’s 2007 conference in Polokwane, Mantashe and some of his comrades were murmuring about the ANC being “the strategic centre of power”.

There’s nothing wrong with vainly believing in one’s political potency – as long as it’s not at the cost of the rule of law.

Like the South African Communist Party (SACP), which he once chaired, Mantashe doesn’t see government as the temporary bearer of state authority; for them, winning elections means capturing state power and all its levers – including the judiciary.

It’s not just revolutionary rhetoric, they believe it. They believe any talk of constitutionalism is liberal claptrap and a conspiratorial plot to frustrate the revolution. For them, democracy means that the winning party is the principal political actor, eclipsing society and commandeering the state.

Mantashe admires the party sovereignty practised by China, where the line between the state and the party is nonexistent. He has an aberrant idea of constitutional democracy, expecting judges to understand revolutionary dynamics and to be mindful of the consequences of disturbing political power.

The rule of law, according to Mantashe, is a pretentious tool utilised by the judiciary to subvert democracy. Judges, journalists, civil society groups, or anyone who scrutinises and questions the exercise of power is the enemy of the revolution, a closet member of the opposition or part of the liberal conspiracy. To Mantashe, judges are anti-majoritarian contesters of political power and not interpreters of the law.

In an interview with the Mail & Guardian in July 2008, he accused the Constitutional Court justices of being an element of the “counter-revolutionary forces” seeking the destruction of President Jacob Zuma and the ANC.

He was reacting to the court’s lodging of a complaint with the Judicial Service Commission against Western Cape Judge President John Hlophe for allegedly trying to influence the court’s justices in relation to cases involving Zuma.

A month later, Mantashe accused judges who attended an innocuous lecture ahead of Zuma’s criminal case, of mobilising the judiciary against the ANC. He told Business Day: “The timing of the lecture where Chief Justice Pius Langa spoke, which was attended by Judge Chris Nicholson [the presiding judge in the Zuma application] and his two assessors, coupled with the timing of the ruling of the Constitutional Court and the apparent mobilisation of the judiciary, is worrying for us.”

In December the same year, Mantashe labelled then judge president Bernard Ngoepe and Judge Jerry Shongwe as apartheid apologists after a full Bench of the Pretoria high court dismissed the ANC’s application to challenge the name chosen by the Congress of the People for their fledgling political party.

In an interview with the Sowetan in 2011, Mantashe vented: “If the Constitutional Court positions itself to create a perception that it overturns anything passed by Parliament, it is going to make nonsense of the democratically elected Parliament.”

Has Mantashe developed amnesia about the dangers of parliamentary sovereignty and legislative excesses under apartheid? His failure to understand the rationale of the ANC drafters of the Constitution, who opted for constitutional supremacy, is baffling. But it confirms his utter ignorance.

For Mantashe, our courts have no right to test the laws made by the government. When the courts restrain state power and force government to implement socioeconomic rights, they are seen by the likes of Mantashe as a political nuisance.

Judges are seen as counter-revolutionary when they limit the executive’s exercise of public power or question their administrative actions. They are supposedly apartheid apologists for reminding and forcing the executive and legislatures to account for their actions.

Mantashe expects the judges to serve at the whim of the ruling party and the executive, simply because they were appointed by the president and not elected. He expects the courts to implement flawed and unjust laws, such as the “secrecy” Bill, only in so far as they shield the corrupt.

For some reason, Mantashe and company have forgotten why their party fought so hard and so painfully to ensure that all the arms of government – including the executive, the legislature and the judiciary – are answerable to the Constitution.

Zuma once told me that the Constitutional Court justices were too powerful. They were behaving like God, he said, and he wanted to clip their wings. Zuma could not understand how the unelected could question the power of the elected.

Addressing an Access to Justice Conference in 2011, he rightly cautioned the judiciary against intrusion into the policymaking arena: “While acknowledging the strides we have made, it is our well-considered view that there is a need to distinguish the areas of responsibility between the judiciary and the elected branches of government, especially with regards to government policy formulation. The executive, as elected officials, has the sole discretion to decide policies for government.”

I agree. When Montesquieu conceptualised the principle of the separation of powers, he had a judicial tyrant in mind. Judges’ powers must be kept under scrutiny. Bona fide criticism of their judgments is one way to do so.

But Zuma and Mantashe are motivated by their desire to cripple the judiciary’s independence and bolster the executive’s power. Zuma said: “The executive must be allowed to conduct its administration and policymaking work as freely as it possibly can. The powers conferred on the courts cannot be superior to the powers resulting from the political and consequently administrative mandate resulting from popular democratic elections.

“Political disputes resulting from the exercise of powers that have been constitutionally conferred on the ruling party through a popular vote must not be subverted, simply because those who disagree with the ruling party politically, and who cannot win the popular vote during elections, feel other arms of the state are avenues to help them co-govern the country.”

Conflating the judiciary and the political opposition is dangerous, and such antipathy towards judges must concern us all. As Gauteng Judge President Dunstan Mlambo said on Wednesday – when the rule of law is undermined by government it is done gradually and surreptitiously. We must not let this happen.

Moshoeshoe Monare is deputy editor of the Mail & Guardian

In part two of a series on the lives of farm dwellers, Tshepiso Mabula ka Ndongeni finds a community haunted by the scourge of eviction
Read more
Advertising