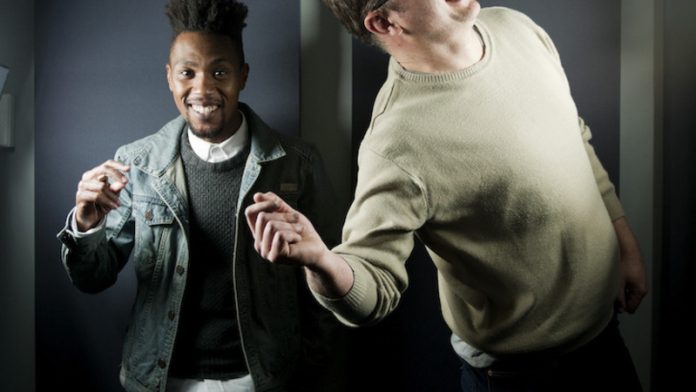 Johnny Cradle has been around for almost 10 years, but one of the band’s founding and long-standing member’s Sakumzi Qumana wants us to forget that.

Started in Port Elizabeth, in the Eastern Cape in 2006 with Qumana and two friends, the band Johnny Cradle has taken on (and drifted) from different members and sonic shapes as he has moved throughout the country to finally settle on what it is today: a two-man band, multiple instruments and a wide-ranging soundscape.

“I keep moving and leaving people behind,” says Qumana, sporting his signature coif and dressed in a jacket by Stg Pepper, a local label that he is one of the faces of. “I moved to Joburg in late 2009. I stopped doing music for a bit and then I met Chris in 2010.

“People get stuck on what we used to do before as Johnny Cradle; but this incarnation of the band is it! I’m not interested in those previous versions of Johnny Cradle,” he says of the band.   I meet vocalist, keys and synth-player Qumana and his band mate Chris Lombard, who plays electric guitar, two weeks ahead of their performance at Monchhichi, in Johannesburg.

The band, who has recently put out an EP of remixes to popular songs, is also playing at the renowned National Arts Festival in Grahamstown in a few weeks.

I ask how Qumana, from Mdantsane township in East London, how he got to be in a band with Lombard, from Hilton in Pietermaritzburg, which Lombard refers to as “the whitest town” in the country.

“I met Chris in 2010, we work at the same place, doing illustration. We’ve been working together since,” Qumana says, with Lombard adding that it’s “five years in July” since they started working together. And since their merger, the band has taken to playing with sounds that filter futurist scores, blues, hip hop, roots and chill wave to produce an interesting  sound uncontainable by a genre.

Seeing as though you guys both hold down 9-5s, would you consider Johnny Cradle as something you do in your spare time?
Sakumzi Qumana: The music is not a side project or a hobby. I’ve always done both: Even before I had a job in Cape Town, I’d be the music thing and the half-an-hour later I’d be drawing. So it’s the same thing; but I just happened to get a job illustrating.

Chris Lombard: We don’t see it as a sideline project, we see it as the other job and they are both as important.

How did the two of you get together?
Chris Lombard: When I met Saki [Sakumzi], I was in a band that was starting to break out in the indie rock scene, called Zaire. From there I started another band, and I realised I wasn’t happy with that one, so I started another one. And later the evidence started pointing to the fact that I just wasn’t very happy with the music I was making. I started hearing the stuff Saki was producing; there was a lot of unexpected influences. And the biggest surprise was hearing how much we had in common musically. So, April last year was the first time we actually sat down and played together. And that for me was when I realised that this is the right band.

Sakumzi Qumana: The band started in 2006 with two friends in Port Elizabeth. I moved to Cape Town in 2008, then it was just me. I later met a scratch DJ Laz, then it was me and him. It was more electronic then. But I moved again, I keep moving and leaving people behind. Then I moved to Joburg in late 2009. I stopped doing music for about a year, then started and stopped again. I met Chris in 2010, we work at the same place, doing illustration. We’ve been working together since.

Sakumzi, you mentioned that this version of Johnny Cradle is different from previous ones. Can you elaborate on that?
Sakumzi Qumana: People get stuck on what we used to do before as Johnny Cradle; but this incarnation of the band is it! I’m not interested in those previous versions of Johnny Cradle.

I guess it’s hard to separate the versions of the band if you’ve been following its career. Right?
Sakumzi Qumana: I am the same person, but I feel like the aesthetic of music is just not the same. And I don’t particularly identity with what I was doing then.

Chris Lombard: I feel similarly to him about the stuff I used to play in previous bands. It’s almost a maturity thing. I’ve matured as a platform and this is a platform that’s allowed that.

So would you guys change name seeing as it is a new band?
Chris Lombard: I don’t think that’s a good idea. There’s already a Johnny Cradle following. And the name is the reason that our band has grown.

How do the two of you come together on sound?
Chris Lombard: It’s very organic. In this band it’s the first time that I play so liberally with effects. A large pat of being a musician is playing with other musicians, and playing around each other. Weaving this tapestry.

Sakumzi Qumana: When we get together a song can start from just a guitar phrase to something I’m doing on keys, then I’ll do the drums and lace the base. But there isn’t really an approach. We don’t have a preconceived idea about where the song will end up sounding like. I’m sure there are influences that are there, but I don’t think the sound we’re trying to attain is a conscious thing. It sort of goes back to that questions: ‘What would you classify the music as?’ I don’t know. I don’t even think about it.

Speaking of influences, what yours?
Chris Lombard: I was exposed to Jimi Hendrix and Slash; so my reference when I make music is the six-string [guitar]. But I listen to almost everything.

Sakumzi Qumana: For me, I just love  the whole roots-reggae thing.

How much of your live performance relies on improvisation?
Chris Lombard: A little bit, but we stay within the constraints of the song to avoid changing its structure. [I believe] that if it’s on the record and this is what the people are expecting to see; you give them that but you give it to them better.

Can you share more about the remix EP you’ve recently put out?
Sakumzi Qumana: I did that [without Chris] while I was supposed to be rehearsing. I would just hear a bit of a song, and think: Man I like this song, maybe I could remix this thing. It’s an extremely fun for me to do because all of it is done in sort of one go. When I hear the song, I can immediately hear the remix or what I can actually do with it; and I can’t get away from wanting to do it.

Would you guys think of putting out an album?
Chris Lombard: We have enough material for an album; that’s for sure. The thought of it sounds so amazing, that I would like it to be something that isn’t rushed for the sake of doing it.

Sakumzi Qumana: While we are recording things as we go, I’m not interested in putting out an album that only a 100 people are going to hear. That’s why for now, the focus is playing and getting ourselves out there. Ultimately an album is for people to hear; so if we don’t have that reach right now, I want to wait until we get to that point.

Would you like mass appeal?
Sakumzi Qumana: Yeah, I do. Speaking on behalf of myself. Music with substance doesn’t have to be labeled underground. And I wouldn’t want people to classify us as such, because people will put you in that box. I’m not trying to be underground or not paid for a gig. We’re not trying to be exclusive.

What can audiences expect from your new show?
Chris Lombard: Thirteen very, very finely crafted songs. Sakumzi Qumana: People should come through, and I believe that they will be able to identify with something that’s missing right now in art. This isn’t just about music, this is also about the representation of the rise of the underdogs.