The $9 computer that could help change the world 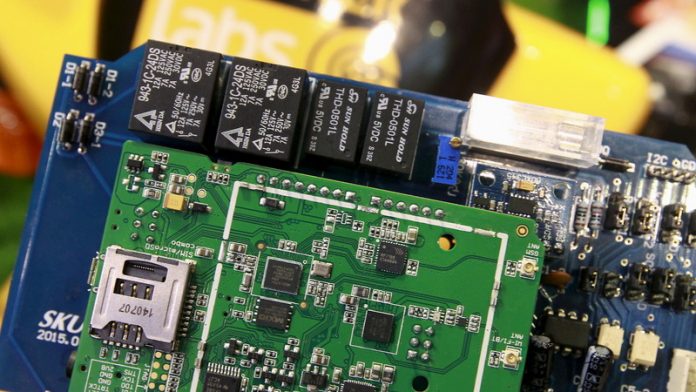 If that sounds like a joke, you haven’t seen C.H.I.P. in action.

C.H.I.P. isn’t much to look at. It’s tiny – as wide as of box of matches and a quarter as deep – but it packs a surprising amount of power. With 4GB of storage, 512MB and a 1GHz processor, this little guy is about as powerful as most desktop computers were at the turn of the century, but at less than 1% of their cost.

How can C.H.I.P. be both so tiny and so cheap? We have smartphone makers to thank for that. In order to keep size, weight and power consumption down to a minimum, companies like Apple and Samsung have spent a decade relentlessly shrinking their components down.

This design paradigm, called “system on a chip” (SoC), squeezes all the computing power required by a device into a single chip. This not only makes computers smaller, it also makes them cheaper. And because hundreds of millions of smartphones are sold each year, the cost per SoC is relatively low.

But if SoC’s are so cheap, why are smartphones so expensive? Simple: components like the screen, camera and memory add considerably to the cost, as does manufacturing, shipping and marketing. And of course profits: Apple and Samsung both make 50% to 60% (gross) profit margins on their devices.

And that’s exactly why C.H.I.P. is such a brilliant idea. It takes a powerful computer that has been turned into a commodity, strips it down to the essentials, and makes it available to a world crying out for cheap computing.

And C.H.I.P. is more than just raw hardware – it comes with a free operating system and a suite of open source applications. You can create and edit documents, surf the web, check email and even edit sound and photos – right out of the (match)box.

Granted C.H.I.P. is essentially useless without at least a keyboard and a screen, but you can buy second hand monitors for less than R500 and keyboards for less than R100. An enterprising charity could pick up thousands of free monitors from the many corporations who constantly scrap old computers.

For anyone used to their snazzy work laptop, C.H.I.P. is going to seem slow and limited. But for an underprivileged child, C.H.I.P. could be their first real taste of computing. In a world in which computer literacy is as important as reading or writing, affordable computing must form an integral part of upliftment.

Next Thing, the startup company behind C.H.I.P., is probably unaware of the impact its product could have on the developing world. The merry band of hackers and makers who started the company are focussed on serving other companies – people who want to make their own devices cheaper. In doing so they may unintentionally help millions of poor people enter the 21st century.

Companies like Next Thing are popping up around the globe, focussing on DIY electronics and open source hardware. Along with 3D printing they are part of the so called “maker movement” which is reviving the spirit of independent exploration in a sector that has been dominated by giant corporations since the late 1970s.

There’s a buzz around the possibilities of C.H.I.P. – talk of using them to power satellites and drones, excitement about an ecosystem of makers and hackers than could grow up around the little devices. Two similar devices have already enjoyed global success – the Raspberry Pi and the Arduino – and C.H.I.P. looks set to join their ranks.

But whether or not any particular device is a long term hit, the long term trend is clear: computers will be everywhere and in everything. Let’s make sure our children are ready.