Imprisoned by the Freedom Charter 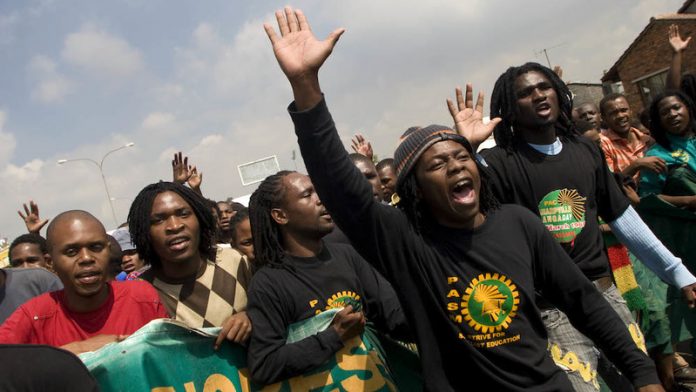 The historiography of the liberation struggle in the era of mass mobilisation is a historical narrative about the life and times of the Freedom Charter and the political formations that embraced it.

A hugely romanticised document, the 60th anniversary of which South Africa celebrates this month, the Freedom Charter is represented as the most radical conceptualisation of a post-apartheid ideal.

Naively, the Economic Freedom Fighters (EFF) latches opportunistically on to this misreading of the document’s impact on patterns of mass mobilisation since it was adopted. Assuming that historically it was a more radical option than any other available, the EFF and the newly formed United Front commit themselves to restoring the Freedom Charter to its historical glory.

Historically, the Freedom Charter performed poorly as an instrument of mass mobilisation. It was only in the final decade of white rule that the charter defined the decisive antagonism. Ironically, it will be remembered more for its role in a political conjuncture ravaged by internecine and brutal violence in which black African society was both perpetrator and victim.

In this role the Freedom Charter may have succeeded in averting a racial conflagration, but it did little to contain the devastation left in the wake of a decade of black on black violence.

There is no comparable historical narrative that documents the black African experience during the period under consideration. Chroniclers have fallen over each other documenting historical moments in which the Freedom Charter-embracing congress movement defines the decisive antagonism.

Left-leaning historians and social commentators constructed the narrative that characterised the charter as the radical and only inspirational blueprint for a post-apartheid society. The narrative suggests that an unbroken thread of nonracialism shaped the resistance movement.

Such a formulation has to force significant facts about the Sharpeville massacre and the Soweto revolt into obscurity. It makes for good propaganda, but bad record keeping.

The Sharpeville massacre and the Soweto revolt involved political formations inspired by African nationalism and black consciousness. In both these political conjunctures the Freedom Charter was not a factor in the definition of the decisive antagonism.

The failed resistance to the destruction of Sophiatown, the adoption of the Freedom Charter in 1955, the women’s anti-pass march and the treason trial in 1956, Nelson Mandela, the Rivonia trial, Liliesleaf Farm, Robben Island and related themes have been documented more extensively than any other historical moment in South Africa. There are no comparable accounts that illuminate moments in the history of the liberation struggle in which the black radical tradition defined the decisive antagonism.

Moments of historical catharsis such as the 1960 Sharpeville massacre and the 1976 Soweto revolt, led by political formations inspired by African nationalism and black consciousness, are forced into abeyance. With a few exceptions, the entire liberation struggle narrative is about a quest for a nonracial society articulated in the Freedom Charter as the cornerstone of the congress tradition.

The dearth of chroniclers of historical moments in which African nationalism and the black consciousness defined the decisive antagonism is not surprising.

It can and needs to be explained. When these attracted the attention of historians, it was not to illuminate their ideologies as instruments of mass mobilisation. It was rather to hold them up to ridicule.

In the only book-long account, University of the Witwatersrand academic Phillip Frankel considers the Sharpeville massacre a hugely significant event and as quintessential for the 20th century as Nelson Mandela was.

The massacre was a “defining event because … it represents a moment or occurrence after whose appearance on the historic landscape of South Africa nothing was quite what it had been, and nothing could quite be anticipated by even the most prescient of social commentators”.

Frankel’s account is a liberal critique of the apartheid state. It does not pretend to explore and explain the Africanist determinants of the anti-pass march and the subsequent massacre, despite the obvious presence of Pan Africanist Congress (PAC) leader Robert Sobukwe in the equation.

Frankel cannot be faulted for failing to explain how the PAC slogan Izwe lethu [our country] resonated with the historical experience and self-awareness forged in struggles against the ascendant bywoner, or poor rural Afrikaner class.

More disparaging is the remark by Tom Lodge, the high priest of radical, revisionist historiography of the liberation struggle. Lodge, in a volume evocatively titled Resistance and Ideology in Settler Societies argues that Poqo, the armed wing of the PAC, was short on political theory as “displayed by the brutal simplicity of its catchphrases, the absence of any social programme save for the destruction of the present order and its replacement with its inversion in which white would be black and black would white”.

The social programme that Poqo lacked, in Lodge’s mind, is of the calibre of the Freedom Charter.

The second moment of catharsis in which the Freedom Charter was at best marginal and at worst non-existent was the Soweto revolt. In the 18 months of its duration no single placard or slogan made reference to the Freedom Charter.

Yet revisionist historians have concluded that the unbroken thread of nonracialism has characterised mass struggles against apartheid since the adoption of the Freedom Charter.

The Freedom Charter has benefitted immensely from the work of a generation of revisionist historians who enthusiastically embraced the congress tradition as the only legitimate opposition to white rule.

Its radicalism is overstated. In fact, in the context of the late 1950s, when the anti-pass movement was simmering, the Freedom Charter was the voice of moderation.

And, with revisionist historians having taken over the entire process of constructing the liberation struggle narrative, the Freedom Charter is exalted and the black radical tradition is disparaged.