Sixty euros a day won’t make the doctor go away 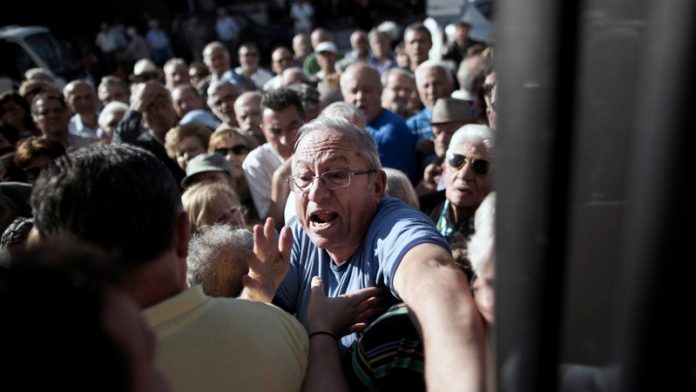 The Greek financial crisis has been around the block several times since 2008. That’s almost seven years since the people of Greece were introduced to the new reality brought about by the global financial crisis.

Seven tough years of sacrifices for the majority of the Greeks, and one austerity measure after the other, have finally brought the people of this historic and proud nation to a crossroads.

I lived in Greece during the crisis of 2008 and was part of the young generation who saw our hopes and dreams disappear in front of our eyes. As a businessperson, I was one of the many fatalities of the crisis and, as an economic refugee, today I live outside the land of my forefathers.

The decisions and actions the Greek people take in the next few days are critical. The time has come for everyone to take responsibility for the mistakes of the past. The people who mismanaged Greece in the past, as well as those who knew about the mismanagement, are to blame.

The people who conveniently chose not to know are also to blame. This not only includes apathetic Greek voters but also the European Union, the European Central Bank (ECB), the International Monetary Fund (IMF), as well as public and private financial institutions.

The July 5 referendum announced by Greek Prime Minister Alexis Tsipras has to be seen as more than just a matter that can be settled by a simple “yes” or “no” vote. This is essentially a sober reality check that will have to be assessed and ultimately decided by the Greeks themselves.

Do they agree to more austerity measures as demanded by the troika (the European Commission, the ECB and the IMF) and in theory the safety provided by the euro, or do they believe that the time has come to seek a solution that may involve dumping the euro and reintroducing the drachma?

Do they continue taking the medicine even though the taste is utterly horrible with bad after-effects, or do they stop taking it completely and risk not being cured?

The illness is very serious and no doubt the doctor is ugly and has bad breath.

Not an easy question to ask, nor an easy decision to make.

The Greek government shut all banks for three days this week and all ATM withdrawals have been limited to €60 a day. This was as a result of the decision taken by the ECB to limit the liquidity facility it has provided to Greek banks.

The implications of decreasing the availability of cash in a fragile economy are enormous. Businesses are already struggling to stay afloat and this will only make matters worse. Some businesses are only accepting cash because they fear the banks will not honour credit card remittances.

Greek retailers have already seen a sharp increase in the purchases of essential goods because the uncertainty has led to people hoarding. But vulnerable citizens, such as the unemployed and the elderly, are more exposed than others.

Many pensioners do not have debit cards and some do not know how to use ATMs. Some banks reopened on Wednesday so that they could service pensioners.

Polls suggest that the majority of Greeks believe that Greece should keep the euro as their currency. If this is confirmed in Sunday’s referendum, it will place Tsipras in a very difficult position. He has already said, if the majority of the populace votes “yes”, then he will “act in line with the Constitution”.

Political analysts have interpreted this as hinting at his possible resignation, or questioning the viability of a national unity government.

If Greeks vote “no”, does this then lay the groundwork for the infamously named Grexit to occur? If the drachma is reintroduced, what will this mean for Greek citizens? Will the country be able to get back on its feet? Will the country be able to attract foreign investments? Will all the corrupt politicians, business people and civil servants be put in jail? Will tax-dodging Greek citizens agree to pay more taxes? If not, then why vote “no”?

If the Greeks vote “yes”, will failed austerity measures finally begin to bear fruit? Will Greeks be expected to pay back a debt that can never be repaid? Will the country be allowed to chart its own course within a larger group of nations? Will Greeks eventually be able to have a unique voice in a world that celebrates pluralism? If not, then why vote “yes”?

The patient with the illness must decide, not the doctor with the bad breath.