A steam train ride through China 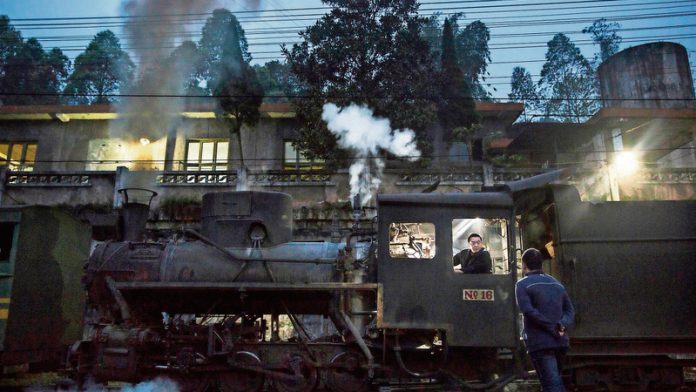 It isn’t the quickest of commuter trains, taking 75 minutes to cover 19km. Nor is it the quietest: speech is barely audible over the rattles and blasts of steam. It is certainly not the most comfortable. Passengers jolt along in unlit cars and on windy days their clothes are specked with ash.

But the journey from Shixi to Huangcun in Jing Xian may well be the most memorable ride they will ever experience. The narrow-gauge railway, running through a lush valley in Sichuan, is one of the world’s last regular passenger steam trains.

Now their numbers are in such swift decline that updating his website “is like running an obituaries page”, he says. “It’s been a steady decline since the turn of the century.”

China is one of the few countries where they run for practical purposes and not as tourist attractions; even so, they’re fast disappearing.

Shixi is three hours from Chengdu, Sichuan’s provincial capital. In recent years, tourist carriages were added to the regular trains and extra sightseeing services scheduled. But for residents, this is still their lifeline.

Until a few years ago, there was no road to the last stops on the line. The area’s new concrete road still doesn’t reach most of the stations and is too narrow for much traffic; even now, people walk or ride motorbikes down the railway line.

For those who pay the ¥5 (about R10) fare, on busy days the few seats soon run out and passengers cling to a rail suspended from the ceiling. Women lug vegetables in woven baskets on their backs as they clamber on. The windows have no glass: when it rains, you get wet or pull up the shutters and sit in darkness.

A step into the future
But on fine days you admire the bamboo groves, rice terraces and fields of flowers. Residents rush out as the train passes, with tongs to pick up dropped embers for their stoves.

A flirtation with diesel engines in the early 1990s was soon abandoned, probably because it was not cost-efficient. So the service continues at its old pace, so slow that, were Olympic champion Mo Farah to race it, he could celebrate his victory with a cup of tea before it had caught up.

On fine days, passengers can enjoy the rice terraces, bamboo groves and fields of flowers through the glassless windows. (Getty)

China now boasts over 10 000km of high-speed track, with trains running 18 times faster than those on the Shixi line. But this railway seemed a step into the future when it was built in 1959, as part of the Great Leap Forward, Mao Zedong’s insanely ambitious modernisation drive in industry and agriculture, which led to a devastating famine.

Thousands of workers toiled on this short stretch of track. “We didn’t have equipment. It was all manpower,” says a man in his 70s who worked on the project as a teenager. “We started work before dawn and by the time we finished it would be dark.”

The train was used to carry freight from the mine at Huangcun, which opened in the 1930s as a Sino-British joint venture. Previously, workers had used wheelbarrows. After the line opened, carriages were added for miners and their families who lived nearby, at Bagou. Since then, the train has carried some 11.6-million people and 18-million tonnes of coal.

A booming industrial town
Liang Shufang (82) moved to Bagou when she married a miner in 1950. Others followed, as workers gained more status under communist rule.

The railway’s arrival completed Bagou’s transformation into a booming industrial town, with more than 7 000 residents. Miners held sports events and performances in the village square. Later, during the Cultural Revolution, the platform hosted struggle sessions as factions battled.

Chairman Mao’s portrait still hangs over the square; slogans from the era adorn the walls of nearby buildings. It’s the town time forgot.

The pit closed in 1988, when the coal seam was exhausted. The schools, the hospital and the workers’ theatre soon followed. Plants poke through the tiled roofs of abandoned homes. Butterflies the size of a hand flutter past, flashing emerald.

A community of rail enthusiasts
“After they built the railway, these streets were full of people,” recalls Zhao Bingrun, 65, as he stands by his store, beneath fading characters reading: “Chairman Mao is the reddest sun in the heart of revolutionary people everywhere in the world.”

His shop is one of the few still open on what used to be the busy main street but he’d sell it if he could find a buyer. Further down, a hen scratches in the dirt; a cat lazes on a windowsill. “Without tourists, this place would be completely empty,” he says.

Most travellers are from Sichuan; some are from Japan, Russia, Britain, even Afghanistan. They’re rail enthusiasts eager to witness the steam age’s last puffs. – © Guardian News & Media 2015