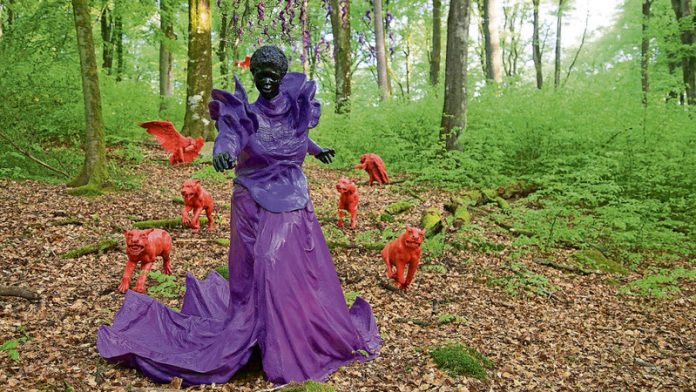 Every year, barn swallows follow an endless summer by traversing the globe between South Africa and Sweden. This year the work of six South African-based artists has followed in their path for an exhibition entitled Barriers at Sweden’s Wanås sculpture park.

One hundred kilometres northeast of Malmö, the Wanås estate is a prominent feature in the rural landscape of Östra Göinge. It incorporates a 16th-century castle, an organic farm, an art gallery and a world-famous sculpture park that is home to more than 50 permanent outdoor artworks. Louise Bourgeois, Janet Cardiff, Ann Hamilton, Yoko Ono and Robert Wilson are among the 250 or so artists to exhibit here since Wanås Konst’s inception in 1987.

About 60?000 visitors will thread through the gallery and park this year, stumbling on subtle artistic gestures, bold architectural statements and intriguing sound installations set in disused farm buildings, cultivated gardens and an expansive ­natural beech woodland that includes dams, waterways and a 500-year-old oak where Danish guerillas were hanged in a 17th-century battle with the Swedes.

The works of Igshaan Adams, Kudzanai Chiurai, Hannelie Coetzee, Nandipha Mntambo, Mary Sibande and James Webb will feature among them in the Wanås Konst art foundation’s 2015 main exhibition that runs until November.

In Barriers, South Africa holds these artists in common, but it is the overarching motivation of Wanås Konst founder Marika Wachtmeister and the curatorial team of Elisabeth Millqvist and Mattias Givell that pins them together in Sweden’s ongoing fascination with global dialogue and cultural exchange.

Millqvist explains: “South Africa is the starting point for this exhibition because it has a vibrant art scene. There you can be educated at art schools, you can exhibit at galleries and be part of a market. South Africa is a country where a lot is happening, there are a lot of stimuli.”

South Africa’s relationship with Sweden was brought into sharp focus by assassinated prime minister Olof Palme, who embraced the ANC in the 1970s and 1980s when leading Western nations still rejected its members as terrorists.

“For some years we have worked for an extended dialogue, a global dialogue. There are a lot of differences and a lot of similarities. We know our futures are totally intertwined. When you look elsewhere it is not only about discovering that country’s artists; artists have a way of making us see ourselves,” Millqvist adds.

Cape Town artist James Webb takes his 2002 piece, Prayer (Cape Town), and transforms it for this ­exhibition to Prayer (Malmö) by turning his focus to the nearby city for fresh content. He returns with recordings of about 100 prayers from a host of religious traditions, looped through 12 speakers, highlighting the diversity present on the doorstep of a society often perceived as homogeneous.

A cacophony pours from the speakers set on a hall-size red carpet inside a gallery. Listeners are invited to remove their shoes and participate. It brings to mind the noise and conflict that comes from religious ­sectarianism. But, as the listener moves through the infinite possibilities of the overlapping sound loops, they blend, harmonise and interfere. Pegged to the title Barriers, it is not difficult to imagine Webb cocking his head to consider the shifting form and function of boundaries.

“James has a way of making us share space in one room and bring out the importance of listening,” says Millqvist.

In a second installation, Webb presents the recorded sounds of subaquatic seals and human vocal responses in the lunar-cyclic and solar-powered Title Unknown.

Nestled on the woodland edge, Cape Town-born Igshaan Adams ­presents another compelling religiously inspired piece in I Am You that draws on his liberal Muslim prayer practice as a gay man brought up in a Christian home.

I Am You invites a tactile response in trying to decipher its meaning. Gradually it becomes clear you are seeing and feeling the kneeling form of a shrouded human. Adams points out that it faces Mecca, signifying its representation of Islamic prayer.

Under a veil, or purdah, he will “chant the different holy attributes of God, such as God is most merciful so human beings are merciful, God is most affectionate so human beings have affection. This is a method to activate these qualities. Within this experience there are so many experiences of having to overcome internal barriers to hover between the state of being conscious and the mystical realm … which can become quite scary so this veil does give a sense of security,” he says.

In Enticed Contemplation, Swaziland-born Nandipha Mntambo, renowned for her sculptural and photographic depictions of the female form, brings to the woodland an interactive billowing headscarf sculpted in aluminium grating that, Millqvist says, Mntambo compares to the safe comfort of a womb.

It can be entered, so the viewer is encircled while still able to see in all directions through the grating. The sculpture’s opening turns the viewer’s gaze to the tranquil dappled green woodland.

Near the entrance to the park a bust of Mntambo morphed with a cow’s head has been erected on a plinth in the 2009 piece Sengifikile.

Johannesburg-based photographer-turned-sculptor Hannelie Coetzee continues to take her photographic skills to sculpture. In Ou Sog tussen Bome, she ­constructed a remarkable three-dimensional image of a wild boar among the beeches, using the ends of cut branches to present its pixelated face. She relates the piece to unfounded fears that saw the animal hunted to the brink of extinction in Sweden. The process and result of the biodegradable work is documented by ­photographer Reney Warrington.

Global dialogue
Mary Sibande’s grandmother and mother were domestic workers. Their story colours the work of the artist, born in Barberton, Mpumalanga. It precedes a transformation in the sculptural presentation of herself that we see in the brightly hued Let Slip the Dogs of War, fêted at the Barriers opening.

Some years ago Sibande dropped the elaborate blue uniform of alter ego Sophie – portrayed in photographs and sculptures taking on a superhero-like appearance, lending pride to the role of South African maids and women congregants, while still fraught with the tension of being black and female.

She replaced it with a purple flowing formal dress that re-emerges in Let Slip as she leads a charge of scarlet hounds and vultures across the leaf litter and a multitude of elevated, formless purple beings trailing high in her wake through the soft foliage.

In Sibande’s work, transformations abound and highlight how permeable barriers can be. In the role of maids under apartheid, black women, among the most disenfranchised, slipped past high walls and guard dogs to penetrate the heart of South Africa’s privileged set. In the role of artist Sibande tugs on the arc of her family tale. She is the first to obtain a tertiary education and emerges in a global conversation around a common future.

Chiurai moved to Pretoria to study visual art and, while in South Africa, his work came up against the rigid barrier of intolerance – his art, in support of an organisation opposing Zimbabwe President Robert Mugabe, resulted in him being barred from returning home for 13 years.

In that time, Chiuirai found his place in a global dialogue where artists’ voices, like the flight of swallows, cross numerous imaginary barriers and offer space for the dream of post-colonial societies like South Africa in a global context.

The exhibition runs until November 1

*This story has been updated to include the name of James Webb’s art-piece titles.

Eradicating childhood stunting should be a priority in SA