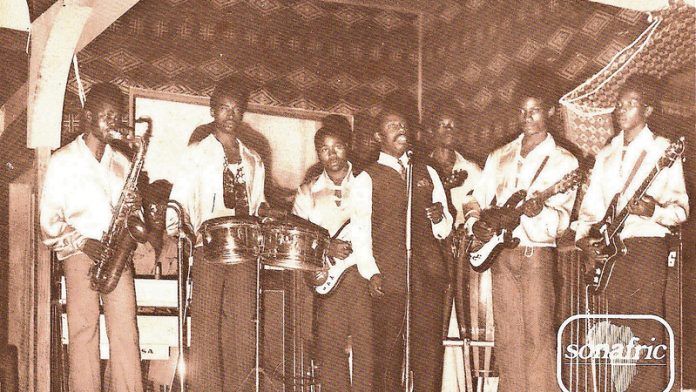 ‘Latin music, is it really foreign to us Africans? I don’t think so. Listen to the drums, to the rhythm. It all seems very close to us – it feels like it’s our own culture,” Guinean singer and percussionist Amara Touré once said.

Few sounds capture tropical, heat-induced laziness better than a full Latin orchestra in a reverie. Unpick those sounds, and each orchestra member is essential to a groove that lasts as long as it takes for ice to melt in a rum cocktail: horns are sultry, drums are earthy, guitars ebb and swell in slow rhythms and the bass is thumped out in a simple yet weirdly penetrating assault.

Forget sweating it out in an Afrobeat gig. When the music is this well acclimatised, you either crash sprawled in a chair or, if you and your partner can muster the energy, plug directly into the rhythm by swaying to a slow dance.

So in a place as humid and sweat-drenched as a Dakar nightclub, it’s no wonder how popular the Cuban ensembles who toured Senegal in the 1940s and 1950s became. They arrived with Cuban sailors and merchant traders who exported goods from the West African coast, from Senegal to Liberia.

For the numerous Afro-Cubans on these voyages, there must have been a sense of homecoming. Few objects represent the scattering of the African diaspora better than a drum, and this homecoming would have been at its most vivid when Cuban congas were incorporated seamlessly into the music scene; Senegal had just gained independence from France, and the nation was searching for a new identity with a sound to fit.

At the centre of Senegal’s cultural reinvention was Le Star Band de Dakar. Led by percussionist, singer and producer Mady Konaté, the band became a musical workshop that extracted the African roots of Cuban genres like son montuno and pachanga with enormous popularity; musicians came from the surrounding countries to become part of West Africa’s new creative hub.

One such hopeful was Amara Touré from Guinea-Conakry who joined Le Star Band in 1958. His addition coincided with the band’s meteoric rise to Dakar’s number one orchestra, a status firmly established when he left the group 10 years later to form an ex-Star offshoot, the Black and White, in Cameroon.

The years 1973 to 1980 saw Touré in a recording studio for the first time and this 10-track compilation represents the complete output from that period of one of the most enigmatic trendsetters of Afro-Cuban music.

Little is known of Touré’s where-abouts from 1980 onwards, although sightings of him in Cameroon are occasionally reported. His disappearance gives extra mystery to a record already coated in a sultry haze.

The guitars sound distant, calling out like the far-off murmurs of a carnival while the percussion and horns speak with stark clarity. The Black and White tracks such as Teemed and Lamento Cubano are masterpieces, and carry the result of 20 years’ worth of musical education digesting the best of Cuba and spitting out a distinctly African pulse.

The bass and driving keyboard rhythm on Lamento Cubano is particularly cutting; Touré sings in a passionate wail that prompts unanswerable questions about how such sensual music could sink without trace until now.

The last four songs were recorded in Libreville, Gabon, with the Orchestre Massako. The opening track, Salamouti, is dictated by the “tok-tok” of a cowbell and a funky guitar lick repeats the phrase in a confident swagger while Touré exchanges vocals with the wild blasts of a Latin horn section.

Not much changes over its near 10-minute length, and the power of this trance-inducing musical formula is made clear when Salamouti suddenly finishes – and hits like punch.

The closing track, Africa, is cloaked in some brutally raw recording quality, but this only adds to Touré’s mystery. The drums are frantic, and even the guitar takes on a percussive quality by rumbling along in a low growl as the song descends into what sounds like an improvised jam.

For anyone keen to experience Afro-Cuban music in its least cosmetic, most explosive state, 1973-1980 is a must-have.

*Note: A previous version of this story claimed Touré is from Senegal instead of Guinea Conakry, this has been changed.