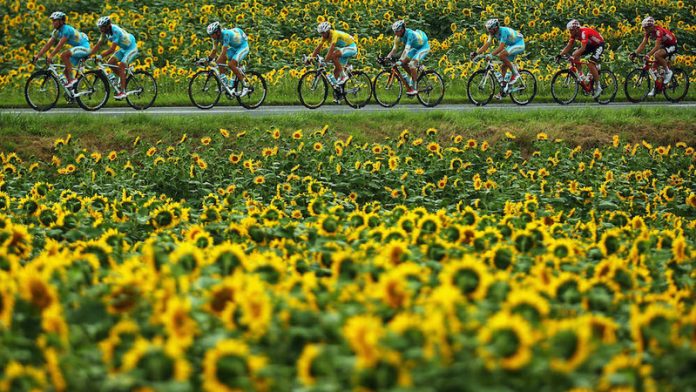 Just one highlight in what could be the most nerve-racking first week the Tour has ever seen. The finish climb is short at only 1.3km but very steep, hitting 25% in one or two of its hairpin bends. It won’t be decisive in the context of the three weeks unless the Tour comes down to a handful of seconds, but it is the first key moment. The run-in to its foot will be vital, as the fight to hit the Mur at the front of the peloton will be desperate and there could well be crashes. On paper, it is one for Colombia’s Nairo Quintana or the Brit Chris Froome.

After the Mur, it is on to the cobbles where the nerves will jangle some more and, unfortunately, there are bound to be pile-ups as the riders fight for the best position. If it rains, as in last year’s equivalent stage, all bets are off with punctures and crashes taking their toll. There are seven cobbled sections, the first a warm-up in Belgium 120km from the finish, but the serious stuff starts 46km from the finish. History suggests Alberto Contador (Spain) or Vincenzo Nibali (Italy) has the best chance here of the four favourites.

Impossible to predict on paper because so much depends on how the riders in each of the teams survive the opening eight days. Teams who have lost riders to the inevitable crashes will automatically be at a disadvantage on a longer, harder course than is usual in team time trial stages. What is certain is that one or two favourites, possibly more, will be on the back foot after this, if not out of the reckoning. But who? That is almost totally in the laps of the gods.

A proper set piece with a substantial mountain to finish after a rolling run-in. This will give a clear idea of the frontrunners who have got through the opening nine days in a decent position. Often, however, the sudden transition from rolling at 50km/h on the flat to climbing at half the speed comes as a surprise, so the hierarchy should become clear here. It is the kind of finish Team Sky have come to specialise in, so it should be a target for Froome.

The toughest Alpine stage, climbing from the gun, and with a brutal finale over the Col de la Croix de Fer before the lengthy ascent to the finish, where controversy ignited around Froome and fellow Brit Bradley Wiggins in 2012. Two days out from Paris and on the third consecutive day of climbing in the Alps, you would expect the yellow jersey here to be in the driving seat even if lower-placed climbers contest the stage win.

With only the Champs-Elysées to come, for once the saying that whoever wears yellow at the Alpe will wear it in Paris is bound to be true. What the organisers hope will be the grand finale, going over the Croix de Fer in the opposite direction to the previous day before hitting the Tour’s toughest mountain-top finish. A stage short enough to encourage any favourite within reach of the lead to gamble on attacking from the start. Given the volume of climbing in such a short distance, this has Quintana’s name on it. – © Guardian News & Media 2015