Europe’s banks brace for market declines as Greece votes ‘No’ 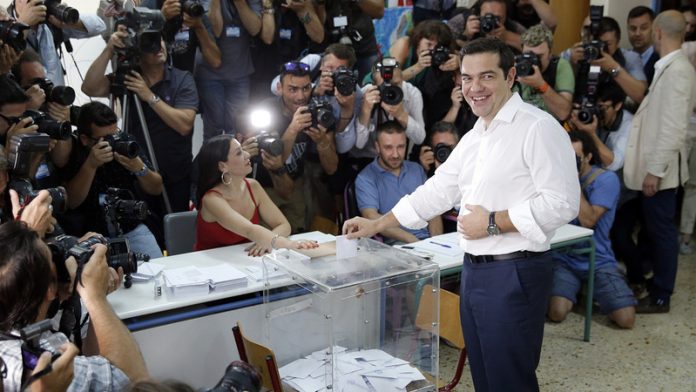 Greeks voted 61% in favor of “no” on Sunday, heeding calls from Prime Minister Alexis Tsipras to reject a proposal by the country’s creditors for more austerity to keep aid going. While Greece faces protracted bailout negotiations, European banking stocks could slump as the chances of the country leaving the currency block have risen.

“There will be lots of volatility post this election result,” David Herro, chief investment officer of Harris Associates, said by e-mail. Short-term volatility will lead to lower stock prices, he said.

Even if European lenders have limited direct exposure to Greece, they could be vulnerable to concern about the impact of the nation leaving the euro and some banks face potentially sizeable price moves on their government-bond books. Italian banks’ holdings of the country’s sovereign debt stood near a record high of 415.5-billion euros in April.

Peripheral bonds
In a stress scenario, spreads of peripheral bonds may almost double, creating potential “negative spill-over effects” for capital ratios as banks would be forced to mark their holdings at market value, JPMorgan Chase & Co. analysts led by Kian Abouhossein wrote in a July 2 report. “A Greek euro exit would have the most negative impact on Italian and Iberian banks,” they said.

The expected sell-off in the bond market may also affect investment banks with large activities in trading bonds, said Stefano Girola, who helps manage 25-billion euros at Syz Asset Management SA in Lugano, Switzerland and has invested in European banks. “Deutsche Bank AG, BNP Paribas SA and Societe Generale SA are among lenders that are most exposed to a risk of losses from bond trading,” he said.

HSBC Holdings Plc and Credit Agricole SA had the largest exposure to Greece at the end of 2014, at 5-billion euros and about 4.2-billion euros respectively, Berenberg wrote in a note to clients June 22.

The Stoxx 600 Banks Index fell 4% last week after Greece announced the referendum on whether to accept the terms of a new bailout. Lenders in Italy, Portugal and Spain were among the biggest decliners, with Banca Monte dei Paschi di Siena SpA, which has greater exposure to Italy’s sovereign debt than competitors, down 12%. Banco Comercial Portugues SA and Banco Popular Espanol SA dropped 9%.

Greek banks closed Monday and daily cash withdrawals at ATMs were capped at 60 euros last week after a run on deposits accelerated in the run-up to the referendum. The governing council of the European Central Bank, which has helped support the country’s banks through emergency liquidity, is due to meet Monday to decide whether to extend funds.

“The Greek banks are still shut, they’re going to remain shut and we’d be surprised if they reopen on Tuesday,” said Paul McNamara, an investment director in London at GAM, which has $127-billion in assets.

Outspoken Greek Finance Minister Yanis Varoufakis resigned after the Sunday vote, giving Greece a chance to lower the temperature on its often confrontational interactions with other European countries. – Bloomberg

Today, the whole world stands where Europe was in 1945. Europe recovered then thanks to massive international assistance. That same attitude of cooperation and solidarity is needed now more than ever
Read more
Coronavirus

There are no available options for containing the spread of Covid-19 that do not have serious economic costs. We need to listen to expertise, not ill-considered opinion
Read more
Advertising
Continue to the category
Education