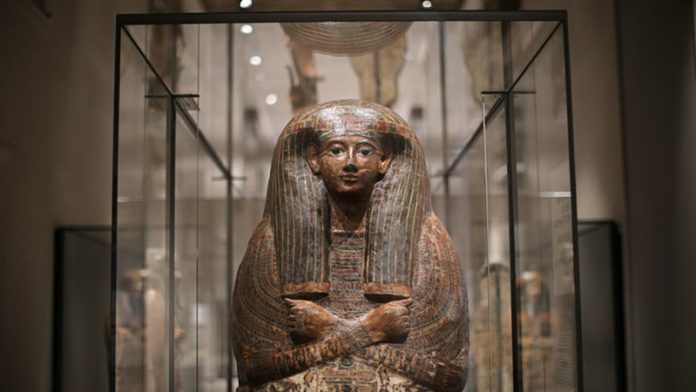 Every month produces new cases of the “repatriation” of antiquities from American museums to their countries of origin.

In late May, Italian authorities displayed 25 looted artefacts retrieved from the United States. They included some objects smuggled by the infamous dealer Giacomo Medici, convicted in 2004 for selling thousands of stolen pieces of Greco-Roman art from Italy and the Mediterranean. A few weeks earlier, the Cleveland Museum of Art returned a 10th-century statue of the Hindu god Hanuman to Cambodia. The idol had been hacked from the Prasat Chen temple in Siem Reap in the 1960s before journeying via a litany of dealers into the holds of the Cleveland Museum of Art in 1982.

In April, homeland security agents relieved the Honolulu Museum of Art of seven ancient Indian artefacts believed to have been acquired through Subhash Kapoor, a New York-based art dealer.

Kapoor, who currently languishes in police custody in India, presided over a vast criminal operation whose full scope authorities are still trying to understand. An ongoing investigation dubbed Operation Hidden Idol spans four continents in trying to untangle Kapoor’s network. For decades, he funnelled stolen antiquities from India and south-east Asia to private collectors and major museums in the west to the tune of over $100m (and perhaps even more than that).

Operation Hidden Idol has piled further pressure on American museums to ensure that their collections are not home to illegally acquired artefacts. In the last 10 years, public collections including the Getty Museum in Los Angeles and the Met have given up hundreds of tarnished objects. In acquiring these illicit antiquities, museums failed to do due diligence in determining the authenticity and provenance of objects. They have since lost millions of dollars.

But it’s not just the financial pain that worries curators and museum chiefs. The headlines generated by such scandals threaten the very acquisitive enterprise of western museums; mounting demands for repatriation make more difficult the project of building “universal” institutions presenting the art and history of the world.

Museums and foreign governments
Sometimes, these claims have little to do with the illicit trade. Writing in the New York Times, Hugh Eakin decried the strong-arming tactics of “art-rich” countries like Turkey, Greece and Italy. “Museums’ relationships with foreign governments have become increasingly contingent upon giving in to unreasonable, and sometimes blatantly extortionary, demands,” he wrote. As China and India grow on the geopolitical stage, so too have Chinese and Indian demands (often by private groups and individuals rather than governments) for the restitution of artefacts from the west.

As a result, defenders of museums believe that their diverse and cosmopolitan collections are under attack from governments and groups with narrow, nationalist agendas. Critics of western museums accuse them of complicity in the illicit trade, and at a more general level, of perpetuating the gross inequalities between the west and the rest of the world.

According to Jason Felch, author of Chasing Aphrodite: The Hunt for Looted Antiquities at the World’s Richest Museum, “museum culture in the US has been slow to sensitise to the realities of the illicit trade”. He sees a parallel between the trade in antiquities and the drug trade: demand in western countries makes both possible. “As long as there’s a lucrative market for looted goods, for objects with uncertain provenance, there will be an illicit antiquities trade,” he said.

Tess Davis, a lawyer with the Antiquities Coalition, praised the Cleveland Museum of Art for voluntarily returning the Hanuman statue, but argued that it should never have been allowed to enter the collection in the first place. “The Hanuman first surfaced on the market while Cambodia was in the midst of a war and facing genocide,” she said. “How could anyone not know this was stolen property? The only answer is that no one wanted to know.”

American museums are largely self-regulated, though many subscribe to the stricter guidelines adopted in 2008 by the American Association of Museum Directors governing the acquisition of archaeological material. Museums have rarely been forced by legal rulings to give up artefacts; instead, they have voluntarily – sometimes pre-emptively – handed over the dodgy objects in their collections.

The political agenda of ruling elites
“No one wants to be promoting the illegal trade,” said James Cuno, CEO of the Getty Trust and a major proponent of universal museums. “Collectors have to be very careful about both the authenticity of the object and the legality of a transaction.”

But Cuno fears that universal museums in the west face a deeper challenge from nationalists around the world. Governments and their deputised national museums often couch their demands for repatriation in terms of “repairing the integrity of the nation”. Cuno argues that these claims are more theatrical than moral, making cultural property “about politics and the political agenda of ruling elites”.

In his view, the universal museum remains the best context in which to engage with art. “Works of art have not adhered to modern political borders,” he said. “They have always sought connection elsewhere to strange and wonderful things.”

The ongoing destruction of ancient sites in the Middle East by the Islamic State has galvanised the case for the universal museum, with advocates like Gary Vikan, the former director of the Walters Art Museum in Baltimore, arguing that only institutions in the west can preserve the world’s cultural heritage. Isis’s cultural atrocities “will put an end to the excess piety in favour of the repatriation model”, he told the New York Times.

Colonialism is still alive in art
From another perspective, that defence smacks of western privilege. “Colonialism is alive and well in the art world,” Davis said. “So-called leaders in the field still justify retaining plunder in order to fill their ‘universal museums’ where patrons can view encyclopaedic collections from all over the world. A noble idea, in theory, but in practice, a western luxury. The citizens of New York, London, and Paris may benefit, but those of Phnom Penh? Never.”

Felch, who has spent years investigating the practices and acquisitions of institutions like the Getty Museum, understands the problematic history of universal museums in the west, but still sees great value in their encyclopaedic character. “Many collections were built during colonial times, but I’m not tilting at windmills, trying to undo history,” he said. “I wish there were encyclopaedic museums elsewhere in the world.” He suggests that the many large, well-resourced museums in the west must help facilitate loans and exchanges with museums in other parts of the world.

While at odds with Felch on other counts, Cuno agrees that institutions like his have a global mission. “Any museum that argues for cosmopolitanism and cultural diversity has the obligation to encourage that access everywhere,” he said. “There is no reason to believe that people elsewhere are not curious about the world.” – © Guardian News & Media 2015