Grexit is now only way out for Greece 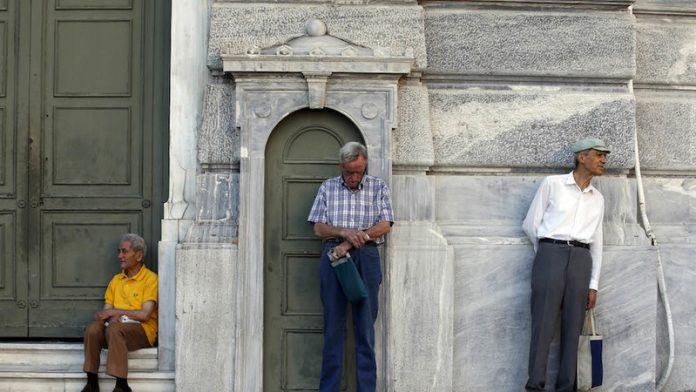 There must be Grexit this weekend. It is light at the end of the tunnel, the best possible outcome from Greece’s agony and, in truth, the only one. The admission of Greece into the eurozone in 2001, tying its economy to that of Germany (and its reckless bankers), was a disaster waiting to happen.

The error was so great that even this tiny economy – just 1.3% of the European Union’s – has contrived to traumatise Europe’s leadership for the past three months. The only catastrophe now would be no Grexit.

Talk of Greek bankruptcy and its dropping the euro as “an abyss … a nightmare … chaos … unthinkable anarchy” is bankers’ drivel.

It will be tough to handle – made vastly more so by being delayed, unplanned and enforced. But handled it must be. Greece is bankrupt. It cannot pay its debts, let alone any more forced on it by a “bailout”. There must be a managed default and a restarting of the engine of recovery. That is the only “deal” that should be discussed this weekend.

Borrower and lender alike had to accept risk for capitalism to thrive. Greece within the eurozone was allowed to borrow riskily and was lent to riskily. Any fool (except a eurofool) knew it would end in disaster.

The International Monetary Fund last week admitted Greece’s debts were “unsustainable”. But such is the political arthritis now afflicting Europe’s “technocratic” rulers that they ignored the fact. They concentrate on their one concern: somehow extending Greece’s repayments so German, French and British banks could have even larger loans underpinned.

It is bankers, not Greeks, who are being “bailed out”. They want Greek taxpayers to go on paying interest even if the principal is as beyond reach as a tsarist bond.

Denying an entire nation the benefit of bankruptcy imprisons its citizens. The most famous debtor in literature, Dickens’s William Dorrit, could never repay his creditors as long as they kept him in the Marshalsea jail. But they kept him there because it suited them, as it does Greece’s bankers, to have his debts on their books rather than admitted as unpayable.

Even if Greece does win some debt relief this weekend, this would not set it on the road to recovery. Austerity has already impelled the Athens government to curb its madcap public sector.

It has begun the “restructuring” that justified similar austerity in Western countries (notably Britain) in the 1980s. It can now reasonably argue that austerity’s basic job is done. It is now running a primary budget surplus, spending less than it receives in taxes.

Austerity economics was always meant as a short, sharp shock, not a coherent economic policy. For Greece it has been about as productive as prisoners sewing mailbags. Growth has been stifled, demand suppressed and investment stalled. National output since 2008 has fallen by a quarter, 25% of its workforce is unemployed.

A deliberate recession
It is simply crazy. Greece cannot grow and cannot service future borrowings, let alone past ones. It is seeing Europe’s worst recession since World War II – a deliberate, man-made recession. The eurozone’s managers care more about their loans and their beloved currency than they do about the welfare of Greece.

Greece’s competitiveness is way out of kilter with the powerhouses of the northern eurozone. Even the EU’s more moderate flat-earthers argue that Greece’s debts should merely be rolled over while it “rebalances” to German levels of efficiency. It must stay shackled to an overvalued rate of exchange lest the great European cause suffer and ever closer union be tarnished.

In this spirit a group of left-wing economists, including France’s Thomas Piketty, wrote to the Guardian on Wednesday, lauding the euro as “a beacon of hope, democracy and prosperity”. It is as if Keynes had never lived.

The idea that a floating currency within the EU is “anarchy” or “the abyss” is nonsense. Britain’s pound sterling has fluctuated by as much as 30% against the euro in the past 15 years, to the benefit of the country’s economy, and probably to Europe’s as a whole.

Fluctuating currencies may be a nuisance, but they reflect the fact that nations are sociopolitical entities. They make different democratic choices and are subject to different market disciplines.

Greece could never have brought itself into line with Germany overnight. Athens was never going to be Hamburg. Its savings fled north along with its skilled labour. It was crippled by its hosting of the 2004 Olympics and tried to borrow its way out of collapse. Like Britain for much of its recent history, it needed the shock absorber of a flexible exchange rate.

Devaluation can also lead to hyperinflation, but it has not done so in Britain or in other European economies outside the eurozone.

They should have seen Greece’s budgetary indulgence as a looming catastrophe long ago. They should have admitted their error and negotiated an orderly Grexit. As it is, they have proved unfit rulers of their new Europa. They have harmed its prosperity and endangered its south-eastern flank.

Historical parallels are always dangerous. But the past month’s comings and goings in Brussels, the bluffs and counter-bluffs, the deadlines missed and ultimatums spurned, recall the twists and turns of Europe in 1914. Today’s continental wars may not be bloodthirsty any more, but they display the same chauvinist intransigence.

It is not Grexit that threatens Europe’s security, but blind resistance to it. Had Greece slid out of the euro after the crash of 2008, it would now be on the road to recovery. Its debts would have devalued. It citizens would be in work. Investors would be investing. Tourists would be flowing in.

Perhaps Italy and Spain might be wondering whether they too could be better off with a sovereign currency, leaving a tighter Deutschmark zone to the north. They’d probably be right. But for the time being, the priority is Grexit. – © Guardian News & Media 2015

Varoufakis too honest a finance minister to remain

Why did Greek finance minister Yanis Varoufakis go? The official reason, on his blog, was pressure from creditors. But there are a whole host of other reasons that made it easier for him to decide to yield to it.

First, though he came from the centre-left to Syriza, Varoufakis ended up consistently taking a harder line than many others in the Greek Cabinet over the shape of the deal to be done and the kind of resistance they might have to unleash if the Germans refused a deal.

Second, because Varoufakis is an economist, not a politician, his entire career, and his academic qualifications, are built on the conviction that:

• Austerity does not work;

• The eurozone will collapse unless it becomes a union for recycling tax from rich countries to poor countries; and

• Greece is insolvent and its debts need to be cancelled.

By those measures, any deal Greece can do this week will fall short of what he thinks will work.

On top of that, politicians are built for compromise. Prime Minister Alexis Tsipras has to work the party machine, the government machine, the Parliament machine. Varoufakis’s machine is his brain.

If he wound up the creditors, it was for a reason: they’d convinced themselves Tsipras was a Greek Tony Blair and would betray his promises and compromise on taking office.

The lenders detested Varoufakis because he looked and sounded like one of them. He spoke the language of the International Monetary Fund and the European Central Bank, and turned their own logic against them. But he achieved his objective: he convinced the lenders that Greece was serious.

Varoufakis critics in Greek politics accused him of flamboyant gestures and of adopting a stance he couldn’t deliver on. His Syriza critics believed from the outset he was “a neoliberal”.

Among the lenders it was the North European politicians who could not live with Varoufakis. Though he was at odds with the IMF’s Christine Lagarde and at odds with the fund over all matters of substance, they at least spoke the same language.

His policy was total honesty, and when it could not be honesty in public it was honesty in private. He exploded the world of Brussels journalism, which had become back-channel stenography, by publishing the key documents, usually sometime after midnight.

In the process he has templated a style of politics that may be equally adaptable for the right as on the left, for those with the will to try it: operating from principles, being as open as possible with information, engaging the public in language they can understand, and putting his entire persona on the line. – Paul Mason

This was first published on Britain’s Channel 4 News’s website, for which Paul Mason is economics editor