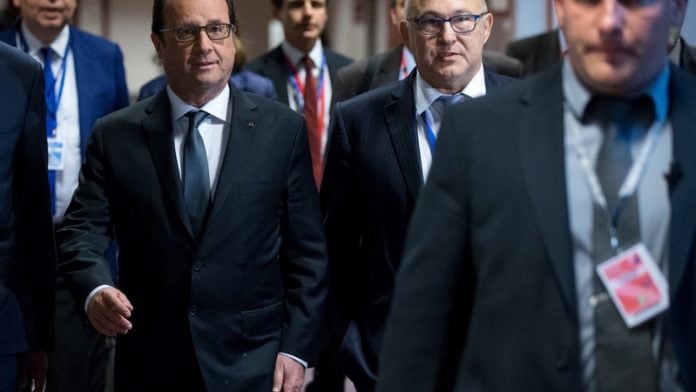 Greece is being “waterboarded” by euro-area leaders, Nikos Filis, the parliamentary spokesperson for the ruling Coalition of the Radical Left, or Syriza, said on ANT1 TV Monday morning. He accused Germany of “tearing Europe apart” for the third time in the past century.

Newspapers levelled similar allegations at Germany, which led the hard-line camp at all-night talks that yielded agreement on the terms needed to open a third bailout for Europe’s most-indebted country. European Union President Donald Tusk, announcing the deal after 17 hours of negotiations, said it would entail “strict conditions”.

“The government is trying to get the least bad, the least catastrophic deal,” Labor Minister Panos Skourletis said on ERT TV. “Talk of a Grexit shouldn’t take place when Greece has its back to the wall.”

The tone of Greek reaction illustrates the obstacles for Prime Minister Alexis Tsipras as he seeks domestic approval for a deal that creditors are calling the country’s last chance to stay in the euro. European leaders have insisted Greece’s Parliament now approve measures including placing state assets in a dedicated fund in exchange for as much as €86-billion in new financing.

Passing laws
According to the initial text for a deal presented to European leaders, Greece needs to pass laws by July 15 to raise sales taxes, cut pension payments, alter the bankruptcy code and enforce automatic spending cuts if the next budget misses its targets. A key sticking point was the involvement of the International Monetary Fund, which Tsipras at one point called “criminal”.

Those measures will be difficult for Tsipras to sell to a public that voted decisively in a July 5 referendum to reject an earlier austerity package that was less onerous than the measures under discussion now. The premier, who was elected on an anti-austerity platform in January, also faces the challenge of keeping Syriza together through upcoming parliamentary votes.

“Greece at Auschwitz,” read the headline of the right-wing Demokratia newspaper on Monday, while the front page of the Syriza-affiliated daily Avgi said “Germany is destroying Europe again”. Mainstream papers were more restrained, with best-selling Ta Nea running “Gordian Knot” as its front-page headline.

No winners
Reaction on social media was also angry. “#ThisIsACoup” became the most trending Twitter hashtag in both Greece and Germany as negotiations stretched into early Sunday morning. Greek Defense Minister Panos Kammenos tweeted that “they want to wreck us”.

EU Commission President Jean-Claude Juncker, asked about the perceived harshness of the measures, denied that the Greek people were being “humiliated”.

“There are no winners and there are no losers,” he told reporters in Brussels. “It is a typical European arrangement.”

In order to pass the required legislation, Tsipras will probably have to rely on support from opposition parties. That could splinter his ruling coalition and force new elections, further deepening Greece’s political and economic turmoil.

On her way into work in central Athens on Monday morning, Despina, a 37-year-old shop assistant who declined to give her last name, said she was taken aback by the weekend’s news. “I’m surprised by how hard the Germans are pushing,” she said. “The Europeans are trying to make us collapse.”

Others only wanted an end to the standoff.

“I’m fed up with being fed up,” said Christina (37), a secretary in an IT company who also declined to give her last name. “This crisis is never ending. We’ve now reached the point where as a nation we must decide what’s the lesser shock: staying in the euro with the conditions imposed on us, or a Grexit.” – Bloomberg