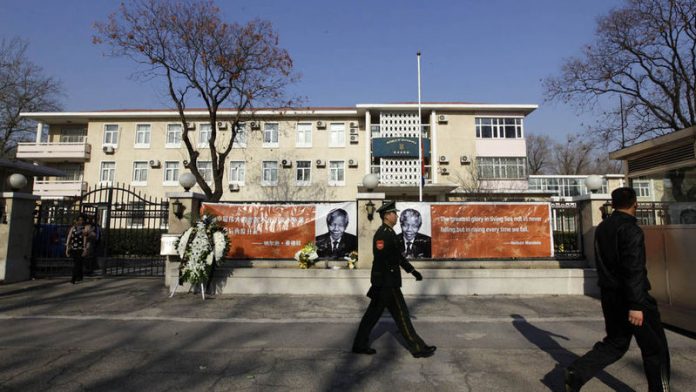 “Our officials did confirm that there are South Africans that were caught or found in [the] Inner Mongolia region of China. Half of them are [now] waiting for the next flight back home. The remainder, of about five, are still in China and consultations are going with the authorities in China for their release,” she told reporters in Pretoria.

“We can also confirm that our deputy president [Cyril Ramaphosa] who is in China, not on a state visit, but an official visit to China, has taken the opportunity of his presence there to also raise this matter. Only heads of state undertake a state visit. We will remain seized with the matter. All I want to do is to confirm that the matter has been raised at the highest level possible,” said Nkoana-Mashabane.

Ramaphosa arrived in Beijing on Monday. The deputy president is on a visit to the global economic powerhouse to discuss issues of trade relations and investment.

The South Africans were part of a tour group detained by the Chinese authorities last week, reportedly on suspicion of being associated with a terror group or banned organisation.

Aid organisation Gift of the Givers said one of the arrested South Africans is a veteran of ANC armed wing Umkhonto weSizwe and that three are related to Vodacom chief executive Shameel Joosub.

The organisation’s statement indicated that a group of 20 tourists, consisting of 10 South Africans, nine Britons and one Indian, was arrested in Edros, Inner Mongolia, and detained without charge, ending a tour of ancient China.

When asked if it had been ascertained what the South Africans were doing in China, Nkoana-Mashabane said: “Are they really, really on holiday? The last time I checked, they were above 18, so following democratic principles of South Africa – I don’t know what kind of a holiday they were on. I am sure that is an interaction that is taking place confidentially between our consular services and their respective families. I pray that we respect that.”

She did not respond to questions on whether or not the detention of the South Africans had put a dent in bilateral relations between Pretoria and Beijing. Some political analysts were suggesting that the controversial detention had overshadowed Ramaphosa’s visit to China.

The South Africans were part of a tour group detained by the Chinese authorities reportedly on suspicion of association with a terror group or banned organisation. – ANA