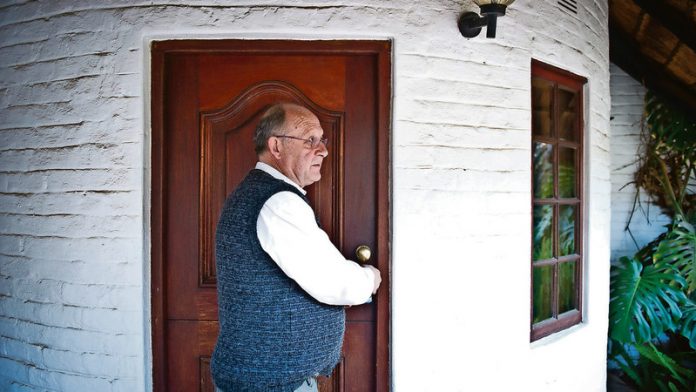 Eight plain-clothes police officers raided the northern Johannesburg house of outspoken constitutional rights crusader Hugh Glenister without a warrant last week, jumping over his garden wall and smashing through doors inside his property.

The police, who told Glenister that they were acting on a tip-off from the service’s crime intelligence division that there were drugs on the Sunninghill premises, are later alleged to have informally apologised and offered to compensate him for the damage.

The businessperson, a campaigner for police independence and a strident critic of President Jacob Zuma, took on lawmakers in 2008 over the dissolution of the Scorpions corruption-busting unit.

After he lost that battle, Glenister went to court over the constitutionality of placing the Directorate for Priority Crime Investigation, better known as the Hawks, under the command of the police.

While he and the Helen Suzman Foundation succeeded in having parts of the South African Police Service Act relating to the independence of the Hawks declared unconstitutional last year, the Constitutional Court berated part of his submission, saying it amounted to “reckless and odious political posturing”. Last year Zuma also accused him of defamation after Glenister said Zuma and the ANC were corrupt.

Motives?
This week Glenister told amaBhungane that although the raid might have been “an accident”, he could not rule out other motives linked to his history of litigation and vociferous criticisms of some politicians.

His lawyer, Kevin Louis, said he would lay charges against the Sandton police station officers for breaking and entering, trespassing and malicious damage to property.

Louis said he was also looking at lodging a larger complaint with the Independent Police Investigative Directorate regarding the conduct of the police after the raid, which took place last Wednesday.

He said that when Glenister’s daughter, Tracy, who also lives in the house, tried to open a case with police the next day, she was told to email a statement.

She said, when she phoned the Sandton station, a Colonel Govender told her to take pictures of the damage to the house and email a statement from Sebenzani Mngadi, a domestic worker who was alone at the house during the incident, to the station. “When I explained that I needed someone to come take my housekeeper’s statement and to make notes of the damage, he told me I could email it through to him.”

‘Many enemies’
Louis said he would also send letters regarding the incident to the national police commissioner, as well as to the ministers of police and safety and security.

In a sworn statement, Glenister said Sandton detective Lieutenant Colonel André de Klerk asked him over the phone whether he had “any enemies”. Glenister’s response was that he is “sure he has many enemies within the ANC and [with] various criminals”.

The police officer also allegedly told Glenister that “all damages suffered would be covered”.

De Klerk allegedly said that, although he was not the officer who authorised the operation, “he knew of it as it is necessary that he be informed of activities in his area. He again stated that what had been done was not illegal.”

‘I feared for my life’
Questions put to the Sandton police and Govender had not been answered by the time of going to print. De Klerk could not be reached for comment.

Describing the bizarre incident in a statement, Mngadi said she “observed a group of men, dressed in plain [casual] clothing, jumping over the wall of the property.

“I screamed, believing the men to be intent on committing a home invasion and robbery, and I attempted to run towards the main gate of the property in order to leave … I feared for my life,” Mngadi said.

“One of the men … stopped me from leaving the property, and stated that he was a member of the South African Police Service and produced a badge that had an [SAPS] emblem thereon. It did not contain his name or any numbers.

“I inquired of the man, who did not furnish his name, why I should believe that the badge is his … The man stated that I could accept that he and the other men were members of the SAPS and did not intend to harm me.”

‘Extremely afraid’
Mngadi stated that she was instructed to take the men inside the house. She noted that they did not produce a warrant or tell her what they were searching for. But being “extremely afraid”, she did as she was told.

The Criminal Procedure Act and the Police Act allow for search-and-seizure raids without a warrant, but only when there is reasonable suspicion that a crime has been or is being committed, or that evidence is being hidden or destroyed.

Mngadi said the police officers took a set of keys from the kitchen pantry and proceeded to check every room in the house, including Glenister’s bedroom, going through his drawers and cupboards.

She alleged that they grabbed two business cards belonging to one of Glenister’s two daughters from a table and then moved to Tracy’s section of the house.

“They entered my room, searched under my bed and moved some of my belongings,” Mngadi said.

Instructions
Mngadi said that when the men left, some jumped back over the perimeter wall. One of the men, who had been speaking Afrikaans throughout the operation, handed her a piece of paper with numbers on it and “instructed me to give the piece of paper to Mr Glenister”.

A white man had then arrived in a BMW and spoke to the others in Afrikaans. They subsequently drove away in the BMW and another vehicle, she said.