Typecast – or getting to know you 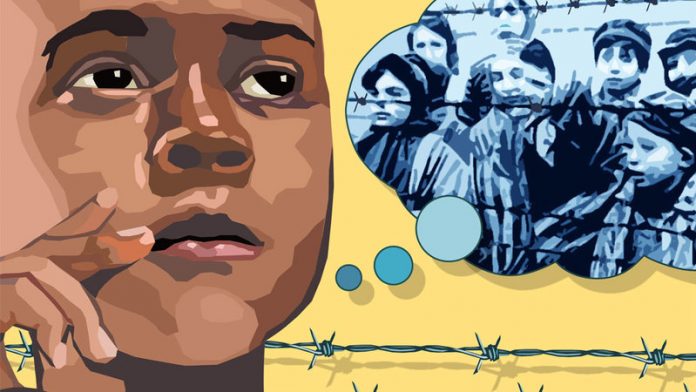 In the 21 years since apartheid was scrapped, there has been a great deal of discussion about how South Africa can heal and progress. This is an often fraught conversation that is happening in many spaces – including school history classrooms.

In its curriculum statement, the department of basic education says high school history pupils should be taught to recognise that “there is often more than one perspective of a historical event”.

If history is well taught, the department suggests, a pupil should develop the ability “to imagine oneself being in that time in the past and [use] information from that time to think like someone from the past”.

This is a fair working definition of empathy. So could history textbooks offer young South Africans the opportunity to develop their own sense of empathy?

To find out, I analysed one chapter in six grade 11 history textbooks. The chapter in question examines the effect of pseudoscientific racism and social Darwinism on the 19th and 20th centuries. It explores how these theories affected thinking about race and racism in Africa, the United States, Australia and Europe, and how they ultimately led to genocide in Nazi Germany.

I wanted to know how the textbooks discursively constructed the past to allow the reader to imagine different social and emotional contexts – and how, if at all, the material taught pupils to think with empathy.

There were two main literacy devices used to mediate empathy in these textbooks. The first involved showing different perspectives of events and variation in these. The second centred on the use of primary narratives and sources.

Here is a perpertrator’s perspective from one textbook: “I had learned from the example of my parents that one could have anti-Semitic opinions without this interfering in one’s personal relations with individual Jews.”

The perpetrator continues by trying to understand how this “con-fusion” led him to dedicate “body and soul to an inhuman political system without this giving me doubts about my own individual decency”.

This deeply personal story will resonate with anyone who holds bigoted attitudes yet remains convinced of their own decency because they interact unproblema-tically with “the other” on an individual basis.

Pupils can relate to this speaker on some level because everyone struggles with conflicting thoughts and attitudes. This account directs pupils to look within themselves and consider that the problem might start right there – a step towards building empathy.

In an extract from another textbook, the 19th-century chief protector of aborigines, AO Neville, justifies Australia’s racist policies towards its indigenous people: “There are scores of children in the bush camps who should be taken away from whoever is looking after them and placed in a settlement … If we are going to fit and train such children for the future they cannot be left as they are … I want to give these children a chance … Unless those children are removed, social conditions in those places will go from bad to worse … I want to teach them right from wrong. How are the children to fight against these conditions? The conditions in the absence of teaching are going to become infinitely worse than they are now.”

Neville claims to be motivated by what is good for the victims and does not seem to see the harm in separating children from their families. But the textbook does not explore this clash between his somewhat paternalistic attitude and the dangerous reality of his policies. It doesn’t explore whether it is possible that Neville genuinely believed his policies were fair and right.

Instead, pupils are asked to write a few paragraphs about whether “you think the Australians committed genocide or not”.

The teacher guide makes the preferred answer clear: “A compa-rison of the text in this unit with the listed actions will show that white Australians indeed committed all those actions that together constitute genocide of a people.”

This rather glib model answer invites pupils to make simple judgments about Neville and people like him. It perpetuates the notion that some people are inherently evil while others are categorically helpless and have no power to choose.

It used primary sources in a way that would encourage pupils to think with empathy about the situations being examined. In addition, this book, more than any other, relied almost exclusively on primary sources that brought a range of voices and perspectives to the fore.

Crucially, it avoided drawing simplified comparisons between divergent histories. Instead, it related

historical actors’ choices to those of pupils. For example, it showed how young people – with the kind of aspirations, hopes and dreams common to all those of a similar age – responded to the choices available to them in a certain place at a particular time. Even if these choices were “bad” (such as supporting the Nazi party and its genocide), it showed how these young people thought and felt.

The other books used the kind of prescriptive moralising shown in the Neville example. They labelled white colonialists generally in very negative terms but did not get into their heads at all. These texts would not help pupils to understand different perspectives – they just reinforced stereo-typical and presumptuous thinking.

They also focused too much on race as a category, which led to a simplification of the roles of victim and perpetrator and cast them in a template that leads to stereotypical thinking. – theconversation.com

Katalin Morgan teaches at the University of the Witwatersrand

In pushing for differences in how Covid-19 regulations are applied, such as with the proposed sale of cigarettes, the Western Cape provincial government is testing national lockdown law
Read more
Advertisting
Continue to the category
Coronavirus