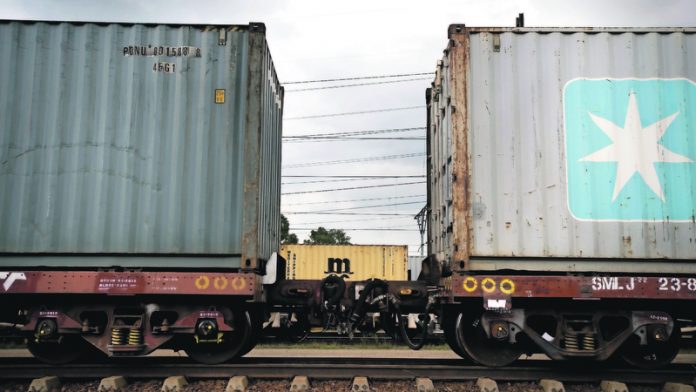 South Africa’s transport sector is a key contributor to the country’s competitiveness in global markets. Its five modalities — road, rail, sea, pipeline and air — are the biggest and most efficient transport networks in Africa, servicing industries that span the continent, and the sector is seen by government as a crucial engine for economic growth and social development.

But the sector is plagued by a number of challenges, slowing what could and should be rapid and continuous growth for increased competitiveness. If South Africa seeks to keep ahead of its African and Asian rivals and achieve global industrial competitiveness, its transport sector needs to sharpen up its act.

The problem of increasing infrastructure demands is not unique to South Africa — the entire economic world is currently racked by an infrastructure backlog, which is not much less than the global GDP of about $80-trillion. Just to keep pace with anticipated global GDP the world needs to spend $57-trillion, which relates to about $3.2-trillion a year, on infrastructure over the next two decades to haul itself out of the doldrums.

The ongoing and effective planning, building and operating of infrastructure is crucial to any country’s economic success. South Africa, however, has slipped downwards in global survey rankings on infrastructure competitiveness. Expenditure on infrastructure has not been happening as it should, resulting in conservative estimates of R1.5-trillion in maintenance backlogs. The country’s transport sector is very much a part of this.

South Africa’s total road network is about 747 000km, the longest road network in Africa. While overall policy is the responsibility of the department of transport, the building and maintenance of roads falls under the South African National Roads Agency (Sanral), together with the nine provinces and local governments.

The road freight sector in South Africa is a major contributor to the local economy. Offering greater flexibility, speed and adaptability than the alternative of rail, transporting goods between cities by road has long been the chosen mode for  industry. However, the impact of heavy freight vehicles on roads is considerable, and the cost of maintenance and upgrades is increasing as traffic demands grow.

While work on the national road network may be keeping pace with demand, the country’s provincial roads are in a state of disrepair, with a cumulative backlog for rehabilitation and maintenance for each province amounting to billions.

Having enjoyed considerable growth over the past two decades, the road freight industry is having a tough year. Operators are faced with ever-changing regulatory requirements in the form of increased tariffs, permits and licence fees, while e-tolls are reducing profit margins.

Labour negotiations and industry strikes have hit the sector hard, causing many businesses to undergo major restructuring and retrenchments. During 2013 the road freight industry shrunk by 4?000 vehicles, resulting in the loss of 9?315 jobs in the sector (Stats SA June 2014).

Looking to the future, South Africa’s economic growth hinges on a focused freight transport infrastructure overhaul. The way to achieve this will be through a shifting of freight traffic from road to rail.

Professor Jan Havenga of the Logistics Department at Stellenbosch University says without a modal shift from road to rail, the current traffic of 3?000 trucks per day on the N3 will grow to 13?000 by 2045 — something our road network would never cope with.

“If we can shift all rail-friendly road traffic to rail by then, the figure would be 6?000 per day, which is still an alarming figure, and implies that we will have to find ways of reducing overall transport demand,” says Havenga.

But whether South Africa’s rail system will cope with increased freight demand is questionable. Technical and operations manager for the Road Freight Association Gavin Kelly believes that in South Africa the road versus rail question is redundant.

“If there was a reliable, efficient, safe and cost-effective rail service that could meet the needs of customers, then goods would travel by rail. There is not. That is why more than 80% of goods are transported on the road — for efficiency, cost, reliability, tracking and door-to-door service. In most countries in the world where rail is successful bulk long distance commodities are transported, and there is a comprehensive, well maintained and well operated rail system,” says Kelly.

But Havenga has a different view. “Rail has a 20% market share of all shipments in South Africa, but this is all shipments, long and short distance freight, all across the country, and doesn’t include rail-suitable freight movements. Many short distance movements are only suitable for road. My calculations show that rail already has 56% of rail-suitable freight. I have no doubt that this share will grow as investment increases.”

South Africa’s freight rail system degenerated significantly after investment was curtailed in the mid-80s — at the very time, notes Havenga, when investment was sorely needed in the face of transport deregulation to focus on long distance corridors and invest in intermodal facilities.

Improving the country’s 20 247km rail network is now a top government priority, and rail volumes are expected to grow to about 350 million tonnes by 2020.

Senior manager for external communications and corporate affairs at Transnet Freight Rail Mike Asefovitz says the MDS is a thorough strategy for rail turnaround and growth.

“Heavy haul railway lines currently convey almost 100% of South Africa’s heavy minerals for export, so general freight offers the greatest opportunity for growth in market share. The growth in the container industry by a staggering 25.2% during 2013/14 is testament to the fact that the road to rail shift is beginning to take shape,” says Asefovitz.

By 2019, Transnet Freight Rail intends to have increased its market share of container traffic from its current 79% to 92%, and rail volumes from 210.4 million tonnes to 350 million tonnes.

Transnet’s long-term aim is transform into one of the top five performing railways in the world by 2020.

South Africa has eight commercial ports: Richards Bay and Durban in KZN, East London, Port Elizabeth and the Port of Ngqura in the Eastern Cape, and Mossel Bay, Cape Town and Saldahna in the Western Cape.

With approximately 96% of the country’s exports conveyed by sea, these ports are important conduits for trade up Africa, and with Europe, Asia and the US.

South African Association of Ship Operators and Agents chief executive Peter Besnard maintains that the country’s ports are not being run as efficiently as they should be, and that a dire lack of preventative maintenance together with complacent management is seeing competitive ports like Dubai and others on Africa’s East and West coast taking advantage of South Africa’s maritime inefficiencies.

“Red tape and procrastination in decision-making has seen the deterioration of critical infrastructure, and huge inefficiencies in increased costs, berthing delays, a flagging marine service, hampered cargo operations and woeful port security are a few of the inadequacies resulting in shipping lines looking for ports elsewhere.

South Africa’s ports are steadily losing their reputation of being the best in Africa, as ports in East and West Africa embark on major maritime investment programmes,” says Besnard.

Whether this will make any mark on the deficiencies experienced by shipping operators is yet to be seen.

Air cargo remains a fairly small component of total freight transported in South Africa. Air cargo tonnage has grown to about 400 000 tonnes per annum, with the bulk, some 80%, being flown in the holds of scheduled passenger flights.

The country’s 10 airports handle more than 98% of the country commercial traffic. The airport assets supporting cargo at Airports Company South Africa (ACSA) are largely aging facilities, with the exception of King Shaka International, where the facilities are contemporary.

ACSA cargo manager Christa Soltau says the company plans to improve the efficiency of the cargo environment, particularly of OR Tambo International, where there is high demand on additional facilities and good opportunities for growth.

“OR Tambo International is the cargo hub in Africa, and we will work closely with stakeholders to improve existing facilities and look into the development of a true cargo city to ensure it remains so.

This falls in line with the Aero–tropolis concept of Ekurhuleni Municipality for the airport facility,” says Soltau.

Havenga concludes that the missing entity in South Africa’s transport infrastructure is the department of transport failing to provide guidance, a regulatory framework to support various imperatives, and guidelines of how to make public-private partnerships work.

“There are many current initiatives in play, but these things should have happened 15 years ago when the Moving South Africa study by the department of transport was completed. Despite the National Freight Logistics Strategy and the National Transport Masterplan, the last 15 years has seen inaction on a grand scale.”