Jock Safari Lodge: Explorers camp it up in luxury 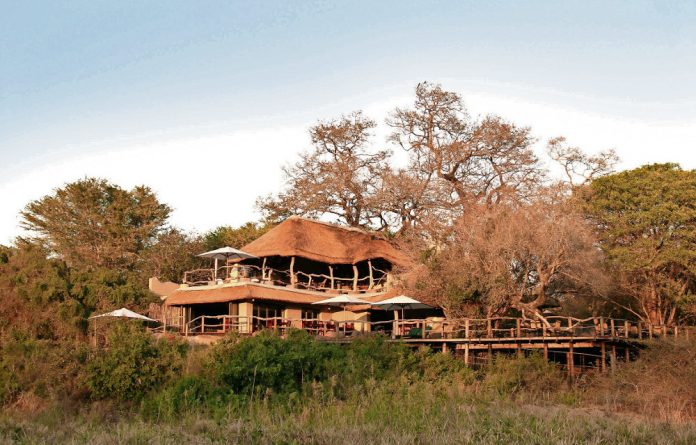 It’s not hard to imagine a sudden rustling in the bush waking you from an afternoon nap in a campsite. It could be anything. Most times your imagination runs wild during that semiconscious state before waking. You remember where you are. The strange surroundings, that unchartered territory your mind travels to when you’re in the middle of nowhere. Wondering takes over, laced with a fair amount of anxiety.

Maybe a bunch of lion cubs are learning to pounce? Or perhaps vultures are creeping about in lofty branches waiting to scavenge on the latest kill? Most times though, you find that it’s just the wind sweeping its way through the tall beige grass, moving freely without any concrete slabs to silence its steps. This will probably leave you feeling a little relieved, if not disappointed.

If you jump from your cot to investigate audible disturbances outside your tent in the middle of the day at the Explorer Camp at Jock Safari Lodge, you may find yourself staring straight into the grey of a larger-than-life elephant as it takes its afternoon tea, munching away on twigs and tree trunks, unperturbed by your dropped jaw and startled gaze.

Explorer Camp finds its inspiration in the bygone era of the late 19th century and in the Percy FitzPatrick book Jock of the Bushveld, published in 1905. The experience seeks to take visitors on a trip back in time, when the bush territory drew explorers who sought adventure in the wilderness and coming face to face with the big five.

FitzPatrick’s book takes place during the early days of European settlers and exploration in South Africa. It’s the account of the author’s adventures in present-day Kruger National Park, and other areas, with his loyal companion – a Staffie called Jock. FitzPatrick saves Jock, the runt of his litter, from death and adopts him. Jock grows up to be a champion fighter and hunter. The epic story is a South African classic and has crept into the hearts of many a dog lover. Now I can’t promise Explorer Camp will carve its own place in your body’s strongest muscle but it does make a good effort.

The camp tries to emulate the “original and authentic safari experience” by providing guests with a two-day walking safari through a remote concession of Kruger Park. Cliff Green and Jacob Sibiya, two experienced guides, lead us through the wilderness and provide insightful facts about the terrain and the animals that inhabit it.

Each day consists of two walks, one just after sunrise and one at about three in the afternoon. The guides are particularly safety conscious and before each walk we’re briefed about the do’s and don’ts of the bushveld.

Green is particularly passionate about his job and takes his responsibilities seriously. He departs from lessons pertaining mostly to ecology and the animal kingdom to entertain us with stories from his previous experiences, which include tales of his adventures with other tourists as well stories about encounters with lions and slipping off slopes and coming face to face with a rhino.

While we’re on the subject of rhino, the issue of poaching is a real problem in South Africa and the numbers of the rhino population are falling dramatically as a result.

If you’re one of those people who drive around with a red plastic horn on the front of your vehicle and want to be given some hope, go to this camp. We had the pleasure of seeing more of the prehistoric-looking creature than any other animal. I was so surprised that I was almost convinced the country was not suffering from a rhino population deprivation at all and I found myself questioning the rhino situation. Perhaps it was a lie? (I know it isn’t.) Maybe we were in great shortage of dassies – of which I saw none.

Sibiya was a bit of a jester but no less experienced than his colleague. Most of our sightings were a result of his keen eye and tracking skills. I couldn’t believe how easy it was for him to spot animals (mostly rhino) from such great distances. My efforts to try to do the same in a lot more time made me want to get a refund for the Lasik surgery I received a few years ago.

Sibiya provided a healthy bout of wit in the wilderness.

He liked joking about the animal calls we heard during the night while we sat around a crackling fire and enjoyed buffet dinners we felt a bit guilty about consuming. There were just two of us, and the meals provided were fit for an entire dinner party. I think we ended up over-eating so as not to offend and be grateful for the chef’s efforts.

My colleague was slightly more gullible than I; she was willing to accept that Sibiya was being honest when he said the screeches we heard were lions going in for the kill. They were just the calls of elephants. I can’t blame her. We wouldn’t know any better, being more accustomed to the odd drunken call of a rugby-playing boykie who’s lost his way home from the local pub.

I must be honest, though: the elephant calls sounded like massive yawns through a loudspeaker by something in desperate need of copious amounts of Halls.

Old-world and adventure capital at the campsite were compounded by the attention to detail given to the accommodation. We were in awe of the lengths taken to provide guests with a comfortable sleeping experience. Colonial-era finishing touches were meticulously recreated in the two-person tent. The comfortable cots with cozy blankets to insulate us from the nightfall cold were made even more delectable by the turn-down service, which caught us by surprise after returning from a decadent dinner spread.

An outside shower was equipped with hot water whenever we requested it, and a canvas wash basin was also provided, along with bath products you wouldn’t expect to find in the middle of nowhere. We did, however, overestimate the flushing power of the portapotties – but it would be unfair to blame that entirely on the service providers.

The authentic safari adventure was a little too real, though. Being served hand and foot did leave us feeling a little bit uncomfortable and way too colonial. Don’t get me wrong: the staff take their jobs really seriously and are passionate about executing their responsibilities with precision.

The perfect setting provided the perfect environment for some quality bonding time and it would have been nice to have been given the opportunity to take advantage of that.

If we did have that, though, we would have missed out on the wealth of knowledge provided by Green and Sibiya – although one did get the feeling that the constant storytelling and need to fill the awkward silences probably became a little bit wearing for them too.

Other than that, if you’re anything like me and the thought of camping in the bush leaves you feeling daunted, this is the perfect place to tap into the experience, without the risk of going home with a healthy dose of PTSD. And no, that does not stand for post-traumatic safari disorder, though it probably could.

#Baltimoreriots: How the media fuels the racist mindset