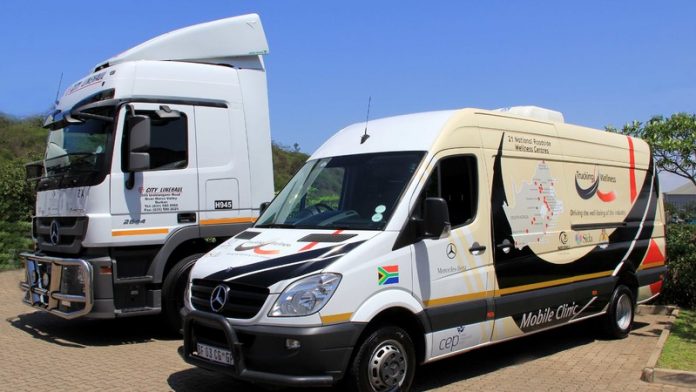 Trucking and good health: two concepts not usually associated with one another. In fact, the trucking industry in southern Africa has long been acknowledged to be particularly vulnerable to poor health and, more specifically, to HIV.

As is often the case among any migratory or mobile working group, the incidence of sexually transmitted disease among truck drivers is high. With the prevalence of HIV among  sex workers, truckers are at high risk of exposure to the virus, and the implications are far reaching, impacting not only the drivers, their partners and families, but the transport companies and ultimately, the wider community.

In 2000, a local road freight magazine conducted an HIV related survey among 300 companies in South Africa’s road transport industry (Fleetwatch, August 2000). The results showed an overwhelming and urgent call for action to curb the spread of HIV. Industry unanimously requested a co-ordinated effort from the government instead of fragmented departmental action, and greater efforts to increase awareness and education about the virus.

Fifteen years on, the work achieved in this area has been considerable, and the results present a positive example of how partnerships between government, trade unions and the private sector can benefit not only an industry but entire communities.

During this period, three major programmes have been established to focus on delivering HIV awareness and healthcare to the trucking industry — one within South Africa, a second dedicated to transport corridors across our borders, and a third focused in other countries in the African continent.

In 2000 it was relaunched by the National Bargaining Council for the Road Freight and Logistics Industry (NBCRFLI) as the Trucking Wellness Programme, as a primary healthcare delivery programme dedicated to the wellness of those employed in the freight and logistics industry. The aim of the initiative was to create awareness of HIV and sexually transmitted infections (STIs) among long distance truck drivers and commercial sex workers.

Over the years, the scope of the programme has broadened into a sustainable model of primary healthcare delivery to specific populations through 20 fixed roadside wellness centres on major trucking routes spanning South Africa, supplemented by a fleet of 22 mobile versions of the same. All the wellness centres are well positioned on national routes with high volumes of trucking activity. These include the full length of the N1 from Cape Town to the Beit Bridge border with Zimbabwe, the N3 between Johannesburg and Durban, the N2 between Durban and Port Elizabeth, and the N4 from Zeerust to Komatipoort, providing wellness hubs to reach long distance drivers, women at risk, and communities in each area.

Staffed by professional nurses and counsellors, both fixed and mobile centres offer general healthcare testing such as blood pressure, glucose and cholesterol testing, measurement of body mass index, screening for tuberculosis and STIs, as well as HIV counselling and testing.

In 2009 the NBCRFLI initiative launched an antiretroviral (ARV) treatment programme. In its first five years, more than 4 600 HIV-positive people registered to access ARV treatment, 500 of whom were spouses of members of the trucking industry.

Over the past 15 years, Trucking Wellness has provided healthcare education to 686 211 long distance truck drivers, sex workers and communities. More than 378 000 patients have received treatment and care, and more than 16 million condoms have been distributed to these vulnerable population groups.

Education plays a critical role in the destigmatisation of HIV, particularly in rural areas, where stigma and denial related to suspected infection result in people delaying or refusing testing. Fear and despair often follow diagnosis due to poor counselling and lack of professional support. This is exacerbated by poverty, particularly in remote rural areas, preventing many of those infected from accessing adequate nutrition to prevent the onset of illness.

Trucking Wellness managing director Tertius Wessels says there has been “an extremely positive uptake from the industry since the start of the programme, and awareness of the project is spreading” with the expansion of its network of fixed and mobile clinics. Drivers appreciate the assurance of professional care, confidentiality, and the provision of a safe environment where they can talk freely and ask questions without being judged or discriminated against.

“The programme’s education efforts are always very well received by drivers, and by the local communities. We make use of visual training materials to show people what an STI is and what it looks like when untreated. There are always initial gasps of shock, but the presentations open a platform for discussion and interactive education,” says Wessels.

As with so many good initiatives, the ongoing challenge faced by Trucking Wellness is funding.

“For 13 years the programme was funded by Sweden, but in 2012 Sida withdrew all funding from South Africa. Trucking Wellness is currently financed by the road freight industry through the NBCRFLI, and supported by private business, including Mercedes Benz South Africa, Imperial Logistics, and the N3 Toll Concession. The department of health provides the nursing staff, medical stock and disposables.”

“If our supply of ARVs could be financed by government, we would be in a better position to grow our footprint and have a greater reach into communities around the country. With this in mind, we are focusing efforts on engaging with all provincial departments to emphasise how Trucking Wellness is perfectly positioned not to compete against but rather partner with government to help broaden service delivery,” says Wessels.

The programme that operates into southern Africa is the Corridor Economic Empowerment Programme (CEEP), sponsored by the International Labour Organisation (ILO) and Sida. The Programme is implemented in six countries, including Malawi, Mozambique, South Africa, Tanzania, Zambia, and Zimbabwe. The project aims to reduce HIV vulnerability along transport corridors in southern Africa not only through capacity building in delivering healthcare treatments but by driving economic empowerment, gender, HIV and Aids interventions targeting vulnerable population groups like women, sex workers and their clients.

Spokesperson for the ILO Decent Work Team for East and Southern Africa Simphiwe Mabhele explained the ILO facilitates and supports a National Steering Committee on HIV and TB in the transport sector hosted by the national department of transport.

“In line with the principles of the ILO Recommendation on HIV and Aids No.200, the steering committee is a social dialogue mechanism for the department of transport to consult and co-ordinate efforts on HIV and TB in the transport sector. Stakeholders in this forum include government (the departments of transport, labour and health); road, aviation, rail and maritime public entities; and labour unions,” says Mabhele.

Since 2007 the North Star Alliance programme has grown from one clinic with 5 000 visitors to a network reaching more than 280 000 people in 13 countries every year.

North Star Alliance executive director Luke Disney emphasises the importance partnerships between private, public and humanitarian sectors have played in the successful rollout of the project’s clinics, programmes and services.

“One of the most important lessons that 30 years of the Aids epidemic has taught the world is that no one organisation acting alone can turn the tide in public health. From the beginning, North Star was built on the principles of partnership, complementarity and accountability. By working closely with national and regional governments to strengthen health systems, with businesses to incorporate workplace health and safety, and with civil society to create links to communities, we are able to make the greatest impact possible,” says Disney.

North Star now works with more than 70 public, private and social partners in Africa, Europe, Asia and the United States to deliver its services in Africa.

Ex-chief executive of the Southern African Clothing and Textile Workers’ Union Worker Health Programme Nikki Soboil believes that while the road transport sector has been proactive in its response to HIV and tuberculosis by adopting a bilateral approach with business and labour working together on programmes, there is still far more that needs to happen. This, together with a cross-border effort with neighbouring countries, would boost driver wellness, HIV prevention and Aids awareness campaigns throughout southern Africa.

“More workplace advocacy, education and awareness would substantially increase demand for such services. While the project was initiated by the sector alone and supplemented by aid from international donors, it is good to see that the department of health is increasingly providing support by partnering with these and other workplace initiatives,” says Soboil.