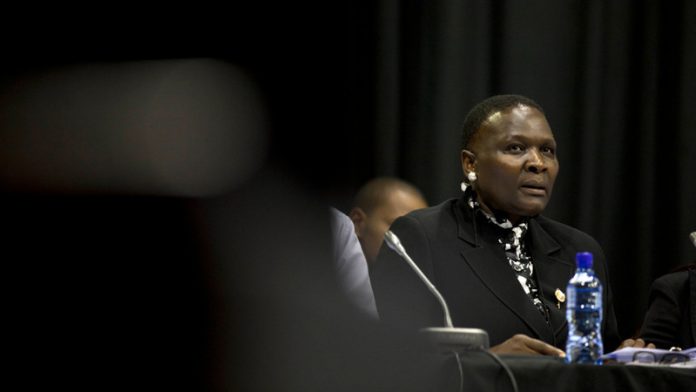 The National Prosecuting Authority (NPA) believes that national police commissioner, Riah Phiyega, should face a disciplinary inquiry regarding allegations that she tipped off Western Cape police boss, Arno Lamoer, about a police investigation into him.

That was 10 months ago, according to documents released by the NPA, following a Promotion of Access to Information Act (PAIA) request for access to the record of decision in that case.  Lamoer was criminally charged but Phiyega was not, and the DA sought to understand why the police had not pursued charges of defeating the ends of justice against her.

On Sunday, City Press reported that the record showed how the NPA had felt Phiyega “did not keep the confidentiality that was so obviously required of her”. At the time, Lamoer was under investigation after allegations surfaced that he had links to underworld crime bosses.

This is the second time that senior judicial officers have recommended that investigations into Phiyega take place.

Farlam commission finds Phiyega unfit for office
Phiyega was heavily criticised by the Farlam Commission of Inquiry’s report into the deaths of 44 people at Marikana in 2012. The commission’s final report recommended an inquiry into Phiyega’s fitness to hold office.

Phiyega has yet to respond publicly to the report, but it has been reported that she was “hurt” by the news. While this does not mean he will institute an inquiry into her conduct, in terms of the law, Phiyega has until the end of July to make representations to President Jacob Zuma on her fitness to hold office.

On Sunday the police referred queries into the latest revelations from the Lamoer matter to the ministry of police, which could not be reached for comment. The NPA’s record show that while prosecutors did not want to charge Phiyega with defeating the ends of justice because they did not feel that there was evidence that she intended to commit the crime. This is according to the DA’s Dianne Kohler-Barnard who did not release the documents on Sunday, but quoted from them in a statement. The record apparently statest that: “The disclosure [to Lamoer, that he was under investigation] was in dereliction of Phiyega’s duty to respect the confidence that the monitors, the investigators and the Provincial and National Heads of the DPCI [Hawks] were entitled to expect of her.”

And: “The dereliction of duty on the part of the National Commissioner of Police is sufficiently well-founded and on the evidence and serious to merit recommending departmental disciplinary steps…In the present matter negligence, if not gross negligence, appears.”

Kohler-Barnard said it was “scandalous” that no disciplinary steps had been taken against Phiyega given that the Minister of Police, Nathi Nhleko, knew what the NPA had found.  As early as April this year, media reports cited unnamed sources who said what the record now confirms that the NPA recommended to Nhleko that Phiyega face a disciplinary hearing.  At the time, his spokesperson Musa Zondi told Business Day that Nhleko sought legal advice on the issue because the legal framework for taking action against Phiyega appeared “murky”.

Nhleko appointed a panel of experts to investigate the police’s senior management on a range of issues in October 2014. The panel’s findings have not been released. Reports continue to swirl that Phiyega will ultimately be removed from the police without an inquiry.

Earlier this month, City Press quoted sources who said Phiyega was “putting out feelers” for another job, and that she was likely to “retire honourably” from her position.