Gold goes the way of oil – down, down down; commodity markets will sweat this year 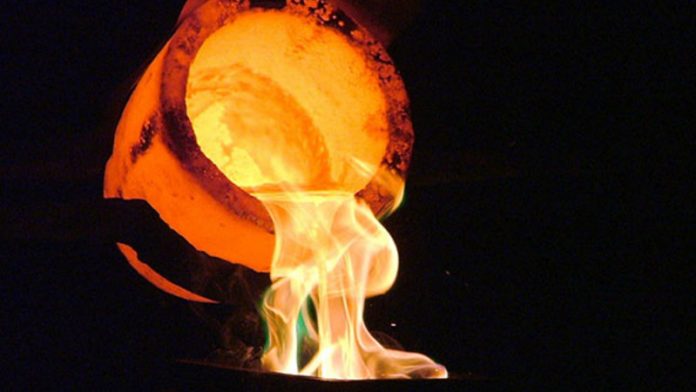 GOLD prices fell to a five-year low Monday, the latest commodity to be hit by a price slide in the past year as the prospect of higher US interest rates dims the attractiveness of gold as an investment.

Prices touched $1,105 an ounce on Monday, the sixth straight day of losses, sending the Bloomberg Commodity Index – a composite measure of international commodity prices – to its lowest level since 2002.

Oil prices similarly fell to a three-week low this weekend, partly in reaction to the US-Iran deal, which is likely to bring Iranian oil into the international market, putting downward pressure on prices.

Oil has slumped nearly 50% in the past twelve months; although the price of Brent crude appeared to have stabilised around $60 a barrel between April and June, the past two weeks have seen a plunge to $55; West Texas Intermediate – another major international price benchmark – is barely holding at $50 a barrel.

It’s particularly bad news for South Africa, whose economy is hovering near-recession: Gold brought in R246 million ($20 billion) to the South African economy in 2013, accounting for 18% of exports.

However, though gold is still South Africa’s top export, the country slipped from being the world’s biggest producer in 2006, and is now in sixth position after China, Australia, Russia, the U.S. and Canada, according to U.S. government data.

The slump will also put a damper on Ghana’s economy, which has been hit hard by currency depreciation on the back of falling exports and poor management of public finances.

Gold is the country’s biggest export, earning the country $5,56 billion in 2013, or 30% of export revenues; petroleum is Ghana’s third biggest export earner, accounting for $3.4 billion, or 19% of revenues in 2013 – and the two commodities are posting their lowest prices in years.

Africa accounts for a fifth of global gold exports, according to data from the Abidjan-headquartered African Development Bank (AfDB), with South Africa taking up half that share; Ghana about 17%; Mali and Tanzania about 9% each, and the rest of Africa 15%.

About 53% of gold mined globally is used for jewellery; another 12% is used in industry, for example in electronics or dental fillings. But 35% of gold in the world is used as a store of value, especially as an insurance policy against social or political upheavals. The problem is that gold doesn’t pay interest or give returns, like bonds and equities do – and it costs money to store it.

Investors would rather pull out their money tied up in gold, and buy government bills and bonds, which pay interest.

“We’ve seen a resumption of a rally in the dollar and if you do the math, that’s bad for commodity prices,” said Peter Sorrentino, a Cincinnati-based fund manager at Huntington Asset Advisors Inc. “The implications there for the hard asset part of the global economy is pretty abysmal looking out to the rest of the year,” said Sorrentino.

But it’s not just gold and oil prices that are falling – other commodities, from nickel to wheat, soy beans to copper, have been on the steady decline over the past 12 months.

In January, the World Bank predicted the fall of nearly all key commodity price indices this year – and it seems they are being proved right.

The slump is due to a combination of many factors. First, the US dollar has strengthened considerably, rising at its fastest rate in 40 years starting a year ago, as the US economy surges while most other developed economies are slowing down, or in deep trouble.

A stronger currency means one dollar can buy more goods than was previously the case, which has the effect of bringing down international prices, typically quoted in USD.

Secondly, the US Federal Reserve is also expected to raise interest rates later this year, for the first time since 2006.

Higher borrowing costs dampen the attractiveness of commodities such as gold, which don’t pay interest or give returns like assets including bonds and equities do.

The slowdown in the Chinese economy, the world’s largest consumer of commodities, is also pushing world gold prices to down. On Friday, the People’s Bank of China revealed that it had been buying far less gold than expected – Chinese reserves stand at 1,658 metric tonnes, far smaller than the 3,500 tonnes analysts had estimated.

World Bank analysts see the depressed prices persisting until at least the end of the year; by 2016 a recovery in some commodities is likely to be underway, “although the increases will be small compared to the depths already reached,” a statement from the organisation indicated.